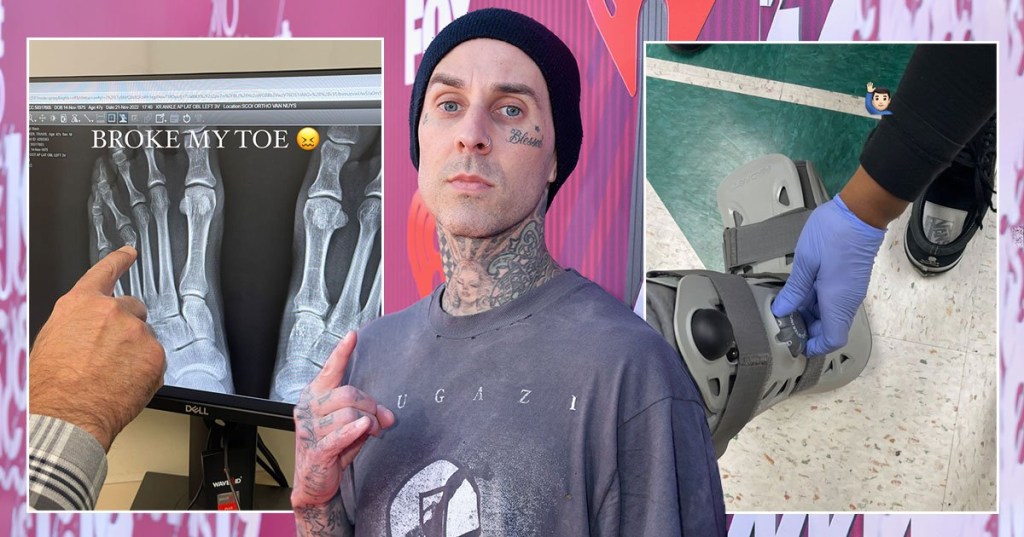 Travis Barker has been left with a broken bone in his foot (Picture: Instagram/Jeff Kravitz/filmmagic.com)

Travis Barker has been left with a giant medical boot for just a broken toe after suffering a mishap this week.

The Blink-182 drummer, 47, took to Instagram to share a photo of the X-ray of his foot showing a break to one of the bones in his left foot.

Captioning it ‘broke my toe’, Travis also shared a later photo of him having a medical boot fitted onto his foot by a medic to help with his healing.

Despite having a cast on his foot, Travis didn’t let the injury stop him from doing what he does best and soon shared a clip of him drumming in his own studio with his boot on.

He and Blink-182 are heading on a reunion tour in 2023 and 2024, tickets for which immediately sold out as fans clamoured to see them live.

Co-founder Mark Hoppus revealed even he couldn’t bag tickets to his own tour, saying on his Discord server: ‘I understand that the ticketing can be frustrating.

A doctor pointed out the break to the Blink-182 drummer (Picture: Travis Barker Instagram)

He was left in a massive medical boot (Picture: Travis Barker Instagram)

‘I bought tickets for two of our shows myself just to see what the experience was like. I had tickets yoinked from my cart and the whole thing crashed out.’

Travis’s injury also comes after he and wife Kourtney Kardashian, 43, celebrated his birthday together in Tennesee.

The musician took to his Instagram account to share some snaps from the trip, showing him and Kourtney in matching black hats with ears on them.

The newlyweds were seen standing outside a cabin, which had a large banner inside it reading ‘Happy birthday Travis’, before taking on a climbing wall together.

The couple were also joined by their children, with Travis’s stepdaughter Atiana de la Hoya and daughter Alabama Barker tagged in the photos.

They clearly loved their time away in Tennessee as Kourtney commented: ‘Let’s move there,’ as Travis replied: Yesssss’.

MORE : Travis Barker and daughter Alabama mourn death of beloved dog: ‘You will never understand how much you helped me on my darkest days’

The pitch invader wore a shirt reading ‘respect for Iranian women’ (Picture: Getty) Portugal midfielder Ruben Neves has given his support to the pitch invader who interrupted Monday’s World Cup carrying a Pride flag. Five minutes into the second-half of the Group H clash between Portugal and Uruguay, the unidentified man sprinted across the pitch […]

Justin Bieber celebrated Hailey’s 26th birthday this week (Picture: Justin Bieber Instagram) Our cold hearts may be melting upon seeing Justin Bieber’s tribute to his wife Hailey on her birthday. Model Hailey turned the auspicious age of 26 today, and in celebrating, Justin shared a series of photos alongside quite the sweet caption. To singer […]

Your weekly tarot horoscope for December 4 to December 10

Get ready for a new week (Picture: Getty/Metro.co.uk) Mercury moves into Capricorn this week which makes it a great time to focus on communication, applications and opportunities in and around your financial and career world. What, or rather who, should you be conversing about or with to get ahead, make progress and secure your glittering […]