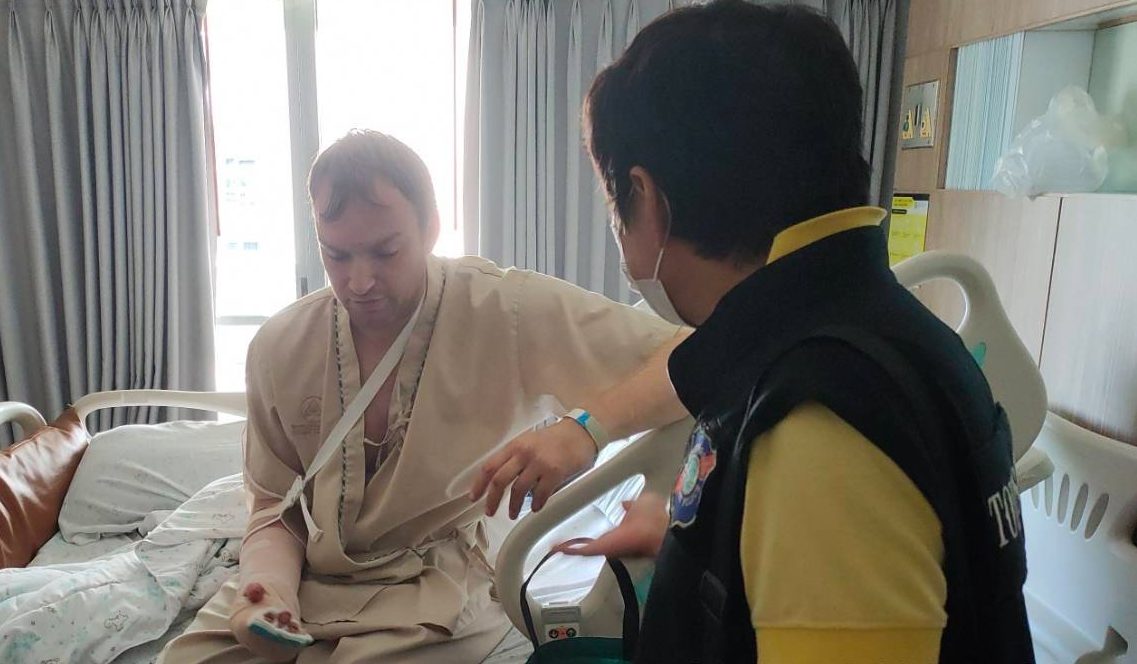 Daniel Nolan, from Southampton, claimed taxi drivers stabbed him while he was out clubbing (Picture: ViralPress)

A British man is facing prosecution in Thailand after claiming he was stabbed by taxi drivers when he actually got injured drunkenly climbing a wall.

Daniel Nolan, from Southampton, told police he was attacked while out clubbing in Chiang Mai last week.

The 30-year-old claimed it left him with a large cut on his tummy and a torn tendon on his hand. He also said he lost his phone which could have been stolen.

Detectives launched an investigation to find the alleged attackers but there was no sign of them on CCTV cameras.

They began to doubt Daniel’s story when he failed to answer basic questions about the ‘attack’ before they found security footage that undermined his testimony.

Footage shows a drunk foreign man climbing through a coffee shop’s yard before scaling the fence and leaving blood stains behind.

He allegedly broke several pipes while climbing the wall, which had pieces of glass on top to deter intruders.

Daniel Nolan is seen on CCTV footage in the early hours (Picture: ViralPress)

Daniel Nolan’s injuries were documented by Thai police as they tried to hunt his ‘attackers’ (Picture: ViralPress)

Owner Chakrabhand Thiphayamonthon, 60, said: ‘The tourist was in a state of extreme intoxication. He was shouting near the Three Kings Monument and was asked to leave by a security guard.

‘He walked to a motorcycle shop and was shooed away. Then, he suddenly started climbing my house wall which is 6.5ft tall and had glass spikes. My nephew even saw him running.

‘There was blood everywhere so I think he must have been hurt while climbing. Nobody chased after him and he even dropped his phone at my house. I will not press charges as there was barely any damage to my home.’

‘Making a false police report is also a crime and if the holidaymaker has deliberately done that, he will be prosecuted,’ the police chief added.

‘He made very serious allegations that police investigated in good faith and spent time working on.’

A police spokesman said officers also found Daniel’s phone, which had not been stolen.