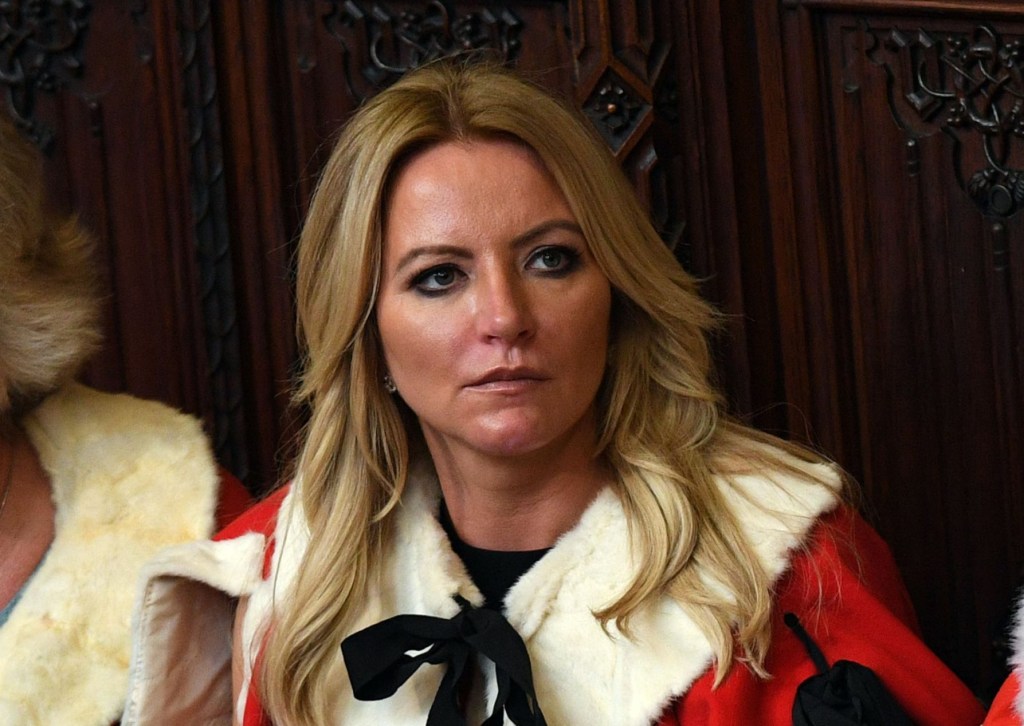 After recommending PPE Medpro for £203,000,000 worth of contracts, it was placed on the ‘VIP lane’ that has faced claims that it prioritised companies with ties to the Tory party.

According to documents seen by the Guardian, tens of millions of pounds of the manufacturer’s profits were crammed into an offshore trust that Mone and her adult children benefited from.

It’s a fresh twist to a years-long saga for Mone, who is already under investigation by the House of Lords Commissioners for Standards for allegedly not disclosing an interest in and lobbying for PPE Medpro.

As much as Mone’s lawyer has said she did not declare her financial interests in PPE Medpro, which supplied face masks and surgical gowns, as she had no reason to, the leaked HSBC documents suggest otherwise.

The report compiled by the bank suggests ‘large value inter-account transfers’ originated from PPE Medpro and were wired to her partner, Douglas Barrowman.

Mone, behind the lingerie brand Ultimo, is understood to have first approached ministers in May 2020 before PPE Medpro had been incorporated as a company.

She reached out to the then Cabinet Office minister Michael Gove and procurement minister Theodore Agnew on their personal emails.

In September 2020, the Isle-of-Man-based businessman was paid at least £65,000,000 in PPE Medpro ‘profits’ before being distributed to a raft of offshore accounts, trusts and companies, the report alleged.

The money leapfrogged between the entities with minutes of each other, the internal bank report claimed.

Transfers reportedly landed in an Isle of Man trust set up to benefit Mone and her children.

The following month, Barrowman is said to have transferred £28,800,000 of PPE Medpo earnings to the trust only five months after securing government contracts.

The money flows were described by HSBC as ‘unusual’ and noted Barrowman ‘may be attempting to conceal the true origins of the funds through multiple layers of transactions creating a distance between the receipt of PPE funds and the final beneficiaries’.

In the throes of the pandemic, the government scrambled to secure protective gear – but critics feel too many contracts went to Tory friends and associates (Picture: PA)

The money trail also ‘suggest a UK peer in the House of Lords has benefited from a contract with the UK government’.

Last night, a lawyer for Mone declined to comment to the Guardian about the accusations.

A lawyer for Barrowman and PPE Medpro said an ongoing investigation restricted what his clients were able to say in response to the allegations.

He told the Guardian: ‘For the time being we are also instructed to say that there is much inaccuracy in …read more

Mark Selby and Mark Williams have both fallen at the first hurdle (Picture: Getty Images) A number of big names will miss out on a trip to Berlin this season after losing in qualifying for the German Masters in Leicester this week. The main stages of the popular tournament begin on 31 January in the […]

Black Friday 2022: get Nintendo Switch and Mario Kart bundle for £260

Do you think Liam Wilson looks like Jack Grealish? (Picture: SWNS) A man who is constantly mistaken for footballer Jack Grealish is bombarded with selfie requests and it drives his girlfriend mad. Liam Wilson, 25, has noticed more people doing a double take when they see him since the success of the England men’s team […]