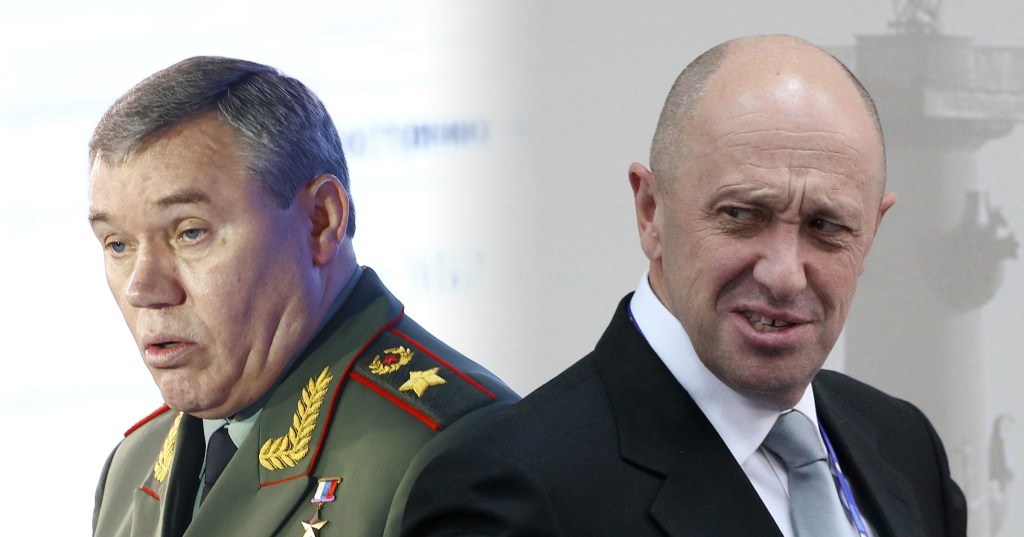 One of Vladimir Putin’s top henchmen has dismissed Russia’s military top brass as a ‘bunch of clowns’ over an order that soldiers cut their hair and shave.

Yevgeny Prigozhin, head of the Wagner Group of mercenaries, openly mocked Valery Gerasimov, the commander-in-chief in whose name the edict was passed down, and claimed his 50,000 troops – mostly scruffy ex-convicts deployed in mismatched fatigues – have outfought the army.

It also drew the scorn of Chechnya’s brutal leader Ramzan Kadyrov, who said on his Telegram channel: ‘I can only imagine the sense of astonishment among our fighters, who didn’t know about such a dangerous enemy in their ranks as facial hair.

Putin listens to Chief of the General Staff of the Russian Armed Forces Valery Gerasimov (Picture: AFP via Getty)

Western intelligence suggests Gerasimov has started his new role as chief of the general staff with a drive to improve day-to-day discipline among his ranks.

In its daily update, the UK’s Ministry of Defence said on Monday: ‘Since he took command, officers have been attempting to clamp down on non-regulation uniform, travel in civilian vehicles, the use of mobile phones, and non-standard haircuts.

‘The measures have been met with sceptical feedback. However, some of the greatest derision has been reserved for attempts to improve the standard of troops’ shaving.’

Prigozhin criticised the military leadership, saying ‘war is the time of the active and courageous, and not of the clean-shaven’.

He said: ‘Jail inmates fight better than units of the Guards. Servicemen with broken spines pass on their military experience at training camps, moving around like robots.

‘And a bunch of clowns try to teach fighters exhausted with hard military labour how many times they ought to shave — and what kind of perfume they must use to greet high commanders.’

He doubled down on his claim that his Wagner force – which includes murderers, rapists and other serious criminals – had captured the bitterly contested Donbas town of Soledar.

And he insisted that ‘even Stalingrad pales in comparison’ in the pantheon of Russian military victories.

Prigozhin addressed convicts who had served six months in the war zone, who he pardoned from their convictions under a secret decree from Putin.

He said: ‘I have come to say thank you for what you have done, from myself….and from the motherland.

‘You have gone through six months of hard warfare. Neither your grandfathers, nor great-grandfathers, were involved in such battles [in World War Two].

‘Those who were at Soledar know that even Stalingrad pales in comparison, so thank you.

Bass the Belgian Shepherd is a very good boy (Picture: PDSA/BNPS) A brave sniffer dog who saved multiple lives from Taliban bombs has been awarded the animal version of the Victoria Cross. Bass, a Belgian Shepherd, served in the US Marine Corps. He has now become the 75th animal to win the PDSA’s Dickin Medal […]

Frank Turner rocked Houses of Parliament, accidentally swore and even got MPs singing along at ‘weird as f***’ gig

Frank Turner reflects on weird gigs, his next album and his place in the music industry (Picture: Ben Morse) It’s hard to top the Olympics, but Frank Turner may have just played his strangest gig to date in the Houses of Parliament. Over a decade after playing, at director Danny Boyle’s request, on an artificial […]