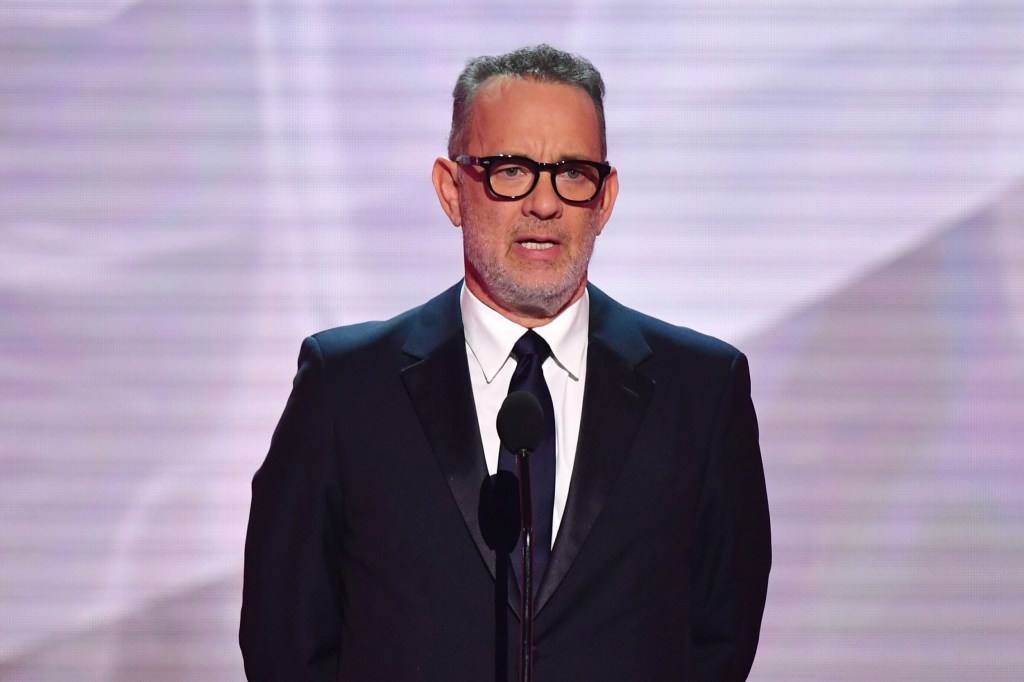 Tom Hanks has plenty of awards under his belt, but he’s likely hoping not to get past the nominations for this one (Picture: AFP)

Tom Hanks has plenty of awards under his belt, but he’s likely hoping not to get past the nominations for this one (Picture: AFP)

The Razzie nominations are in, and it’s bad news for Ana De Armas and Tom Hanks.

Each year, while celebrities pick up their Oscars and Baftas, Golden Globes and Critics Choice Awards, there’s another, not-so-coveted awards taking place.

The Razzies – aka the Golden Raspberry Award – celebrate the worst films and performances of the year, and is not an accolade you’d want on your acting portfolio.

Some stars can be great sports about it all, such as Sandra Bullock, who collected her 2010 award for worst actress in person, and even made a speech.

The awards have also proved controversial, with the Razzies apologising last year to Bruce Willis following his aphasia diagnosis after he was nominated for and won in a category made especially for him – ‘worst performance by Bruce Willis in a 2021 movie’.

This year has seen some other massive names nominated, with Marilyn Monroe biopic Blonde leading the pack with eight nominations.

Marilyn Monroe film Blonde is the most-nominated movie at this year’s Razzies, having proved controversial upon its release (Picture: AP)

Blonde is nominated for worst picture and worst screenplay, as well as worst director and two nominations for worst screen couple, worst remake/rip-off/sequel, and worst supporting actor for both Xavier Samuel and Evan Willams.

Ana herself can at least breathe a slight sigh of relief as she herself has not been nominated, with worst actress nominations going to Ryan Kiera Armstrong, Bryce Dallas Howard, Diane Keaton, Kaya Scodelario and Alii Silverstone.

It would have been a serious leap in judgement, considering the Knives Out actress is in the running for a Bafta for leading actress thanks to her performance as Marilyn in the film.

The same, unfortunately, cannot be said for Oscar-winner Tom Hanks, whose acting skills are under fire in the 2023 Razzies.

Ana’s performance in itself escaped a Razzie nod, which is fitting considering she’s up for a Bafta best actress (Picture: 2022 © Netflix)

While the Elvis biopic is up for nine Bafta awards, it has also clinched two Razzie nominations, both picking on the Forrest Gump star.

Tom is in the running for worst supporting actor, along with Pete Davidson, Mod Sun and Blonde’s Xavier and Evan, and the film is also nominated in the worst screen couple category for, as they put it, ‘Tom Hanks & his latex-laden face (and ludicrous accent)’ in Elvis.

The star is also in the running for worst actor thanks to his role in Disney’s Pinocchio remake.

Also getting absolutely slated at the Razzies is musician Machine Gun Kelly, aka Colson Baker, whose stoner comedy Good Mourning came in just behind Blonde with seven nominations.

Kelly’s flick is in the running for worst picture, worst …read more

…read more Source:: Metro        (Visited 1 times, 1 visits today)Where are the stars of Brookside now? What are your favourite Brookside stars up to now? (Pictures: Channel 4) Fans of the iconic British soap Brookside received a special treat yesterday, as…49ers pride themselves on toughness, but can they beat their toughest opponent in months? […]

The Uruguayan could play against Reading in the FA Cup (Pictures: Sky Sports / Getty) Erik ten Hag has suggested both Facundo Pellestri and Zidane Iqbal will stay at Manchester United this month and feels they will benefit from continuing to train with the first team. The Red Devils are expected to loan out a […]

The midfielder jetted to the UK on Tuesday evening to complete the move (Picture: Getty) Manchester United have completed a deadline day swoop for Bayern Munich midfielder Marcel Sabitzer, who joins the club on loan until the end of the season. The Red Devils were dealt a massive blow earlier in the day after Christian […]