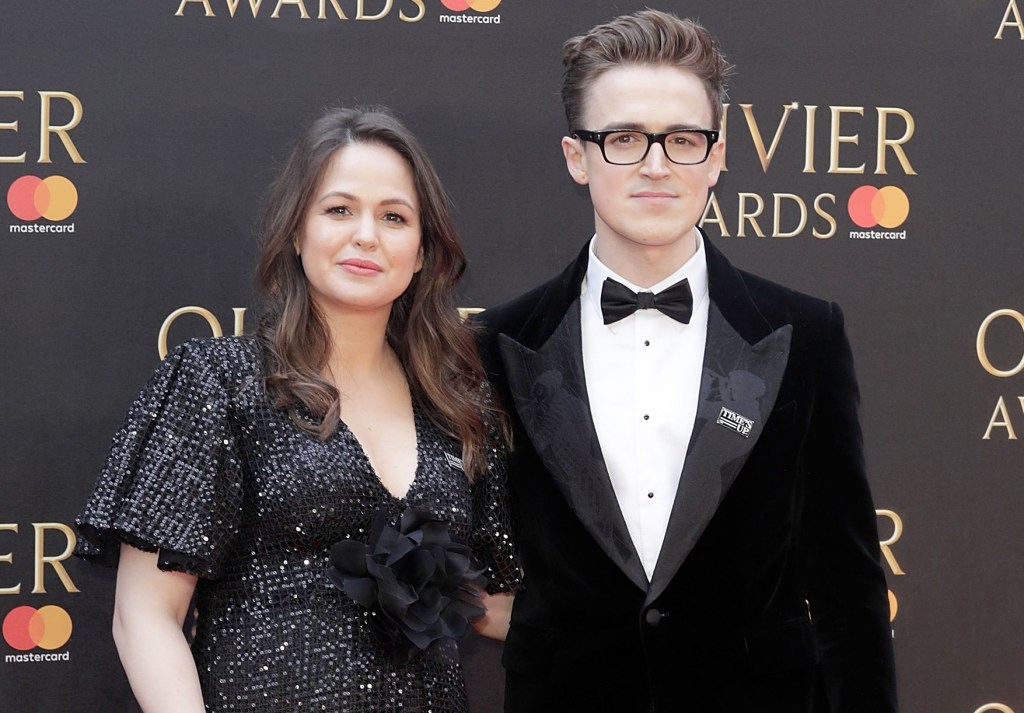 McFly star Tom Fletcher and Giovanna Fletcher are celebrating 10 years of marriage, with Tom paying tribute to his ‘perfect partner.’

The adorable couple first met at the Sylvia Young Theatre School when they were just 13-years-old.

Since their surnames were Falcone and Fletcher, they were placed next to each other during assembly, which allowed them to get to know one another – who would’ve thought they’d be here all these years later!

The sweet then dated, with Tom gifting McFly classic All About You to Giovanna for Valentine’s Day in 2004 (some band trivia for you, there).

Tom and Giovanna married in 2012 and after their ceremony, Tom delivered arguably the best wedding speech every made, in the form of a song, which went viral online.

The 36-year-old lead singer and guitarist revealed that, to mark their 10th wedding occasion, his wife bought him a painting of a Wookiee, a large furry creature from the Stars Wars films.

He shared a series of photos with his two million Instagram followers, showing the couple enjoying a glass of wine together, and a bouquet of colourful flowers.

Another image showed Strictly Come Dancing star Tom posing next to the vibrant blue and red painting of the Wookiee.

He wrote: ‘You know you’ve married your perfect partner when their 10th wedding anniversary gift to you is a painting of a Wookie at a disco.

‘Feeling beyond lucky today that of all the humans that ever existed on this planet, I got to marry this one 10 years ago today. Happy anniversary @mrsgifletcher’

Giovanna, 37, shared a series of black and white photos from their wedding day and wrote: ‘Wedding photo dump. The. Best. Day. Can’t believe it’s been 10 years.’

JLS star JB Gill, Good Morning Britain presenter Susanna Reid and Strictly Come Dancing pro Amy Dowden, who was paired with Fletcher on the show, were among those sending their congratulations.

‘Happy Anni to you two!! Enjoy every moment guys and keep flying the flag…’ wrote JB.

‘Happy Anniversary – so good to see so much love ❤️,’ commented Susanna.

On the day of their wedding, Tom’s McFly bandmates, Danny Jones, Dougie Poynter and Harry Judd, were his groomsmen.

During his romantic speech, Tom wowed Giovanna and guests by singing McFly tunes but with his own lyrics, telling the story of his relationship and thanking those who were part of their special day.

At the end, a choir of children came out to finish the song, reducing Giovanna to tears.

Over the last 10 years, Tom and Giovanna have proved themselves to be quite a power couple, having written numerous books together and Giovanna being crowned Queen of the Jungle on I’m A Celebrity… Get Me Out Of Here!

London’s going out out this week (Picture: Metro.co.uk) Summer’s here and we’re going on it. Saturday afternoon raving at Secretsundaze, rooftop drinking at Wagtail, cocktail masterclassing at the Properly Improper Society, judging croquetas (and to judge them, you have to eat them, right?) and cheering on the UK’s Sam Ryder at a Eurovision party that […]

After a tense final, Gordon Ramsay crowned his first ever Future Food Star (Picture: BBC/Studio Ramsay) Gordon Ramsay crowned his first ever winner for Future Food Stars, after an intense eight weeks, which has seen 12 contestants take part in brutal challenges from diving down into the depths of caves to delivering food on a […]

Kyle Richards is the last remaining OG cast member of Real Housewives of Beverly Hills, but that might be about to change. The 53-year-old, who started off the Bravo show in 2010 with sister Kim Richards and former best pal Lisa Vanderpump, teased that she could bow out soon. In a new interview, she was […]