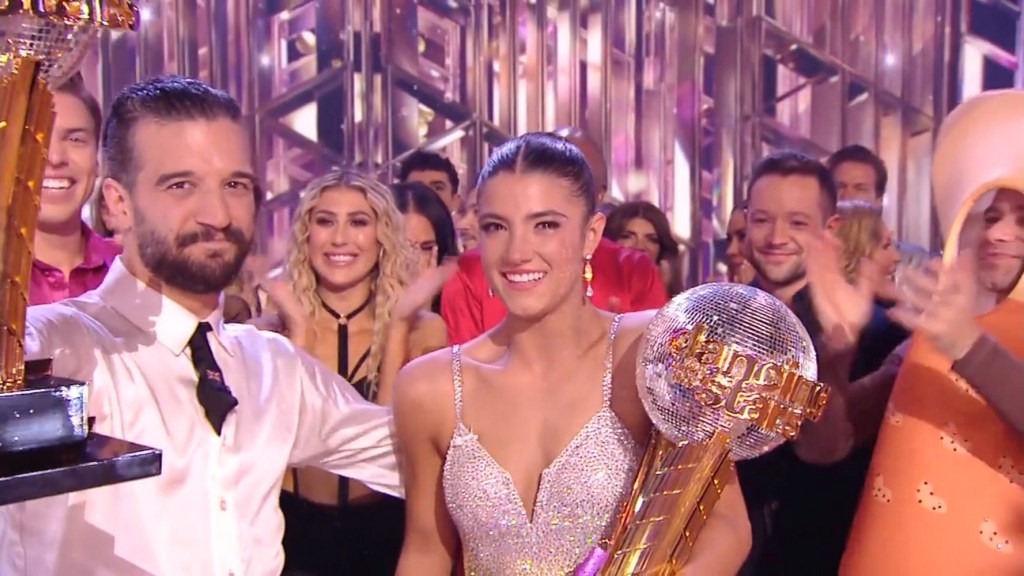 Charli earned perfect scores for both her performances(Picture: Disney Plus)

After an epic 10 weeks of attempting to wow the judges on the ballroom floor, the winner of Dancing With The Stars 2022 has been revealed.

Among the celebrities who were in the running for the Glitterball Trophy in season 31 were Selma Blair and Teresa Giudice, with just four pairs making it to the nail-biting final.

Wayne Brady and Witney Carson, Shangela and Gleb Savchenko, Gabby Windey and Val Chmerkovskiy and Charli D’Amelio and Mark Ballas battled it out to be crowned champion of the dancing series based off the UK’s Strictly Come Dancing.

During the epic night, Shangela and Gleb floored Len Goodman, Bruno Tonioli, Derek Hough and Carrie Ann Inaba with a freestyle to the mother of all mash-ups to Survivor by Destiny’s Child and Call Me Mother from RuPaul.

Meanwhile, Gabby and Val achieved another perfect score of 40 during the evening for a ferocious tango to Cell Block Tango from musical Chicago and Wayne and Witney took on the quick step to a tune to Jackie Wilson.

But there could, of course, only be one winner, with host Tyra Banks announcing that Charli and Mark had been victorious, with Gabby and Val as runner’s up while Wayne and Witney and Shangela and Gleb coming in third and fourth place respectively.

The TikTok star, who earned perfect scores for both her performances, said: ‘Thank you guys, all thanks to you. Your votes. Each of the judges. Thank you so much for the opportunity. Thanks Mark for becoming my new best friend.’

The 18-year-old had been previously cheered on by Kourtney Kardashian and her husband Travis Barker from the crowd, as she is dating the Blink 182 drummer’s son, Landon Barker.

Another appearance that delighted DWTS viewers was the emotional return of Cruel Intention actor Selma and her pro dance partner Sasha Farber.

Selma, who has spoken about her multiple sclerosis diagnosis, was forced to drop out of the competition due to her health but returned on the final night.

She took to the dancefloor barefoot, whirling around in a stunning blue gown as she and Sasha performed to Jordin Sparks’ No Air.

Selma made an epic comeback (Picture: Disney Plus)

A fan commented: ‘No matter the outcome tonight, I hope everyone knows that Selma Blair is the real winner of #DWTS. That’s a fact.’

‘Selma dances with so much grace and elegance. I have no doubt she would be participating in this finale had her health permitted,’ someone else said.

When Dancing With The Stars returns next year, it will look a little different with Len announcing he is …read more

Should the England team be using the World Cup as an opportunity to raise awareness? (PIcture: Getty /Reuters/EPA/AP) When the FIFA President Gianni Infantino invited the World Cup competing teams to use their time in Qatar to ‘focus on the football’, some felt it was tantamount to fighting talk. However, his attempt to shut down […]

It seems that cops are never more defensive than they are on Twitter (Picture: JOHNGOMEZPIX / Getty Images) Since leaving the Metropolitan Police Service in 2015, I’ve been speaking out about the misogynistic ‘canteen culture’ that exists within policing.  I’ve shared my experiences of everything from relatively ‘minor’ micro-aggressions – referring to women as the […]

What if Zelda: Tears Of The Kingdom performance is as bad as Pokémon Scarlet and Violet? – Reader’s Feature