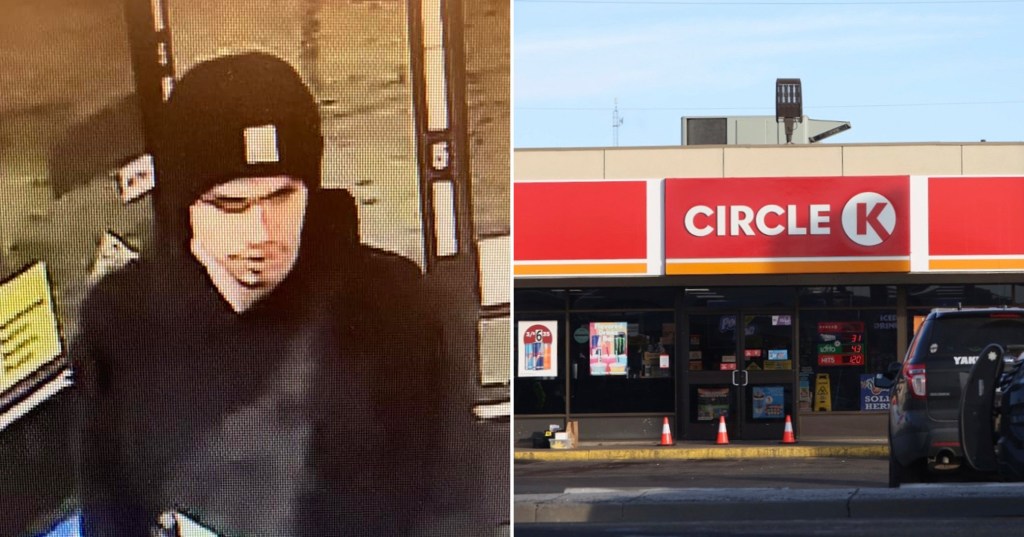 Jarid Haddock was identified as the man suspected of shooting and killing three people at a Yakima, Washington convenience story early this morning (Picture: AP)

Three people were shot and killed at a convenience store overnight in Washington, police said on Tuesday.

At 3.30am on Tuesday morning, police received a 911 call reporting a man opening fire at a convenience store called Circle K in the city of Yakima.

They arrived to find one person dead outside the convenience store, and two more dead immediately inside. The victims have not yet been identified.

‘It appears to be a random situation. There was no apparent conflicts between the parties. The male just walked in and started shooting,’ Yakima Police Chief Matthew Murray said.

Murray said that investigators had collected video from the store’s surveillance camera showing the whole shootout.

Police originally said they believed there was a fourth victim as well, after a video showed the suspect shooting into a parked car before driving away. Now investigators believe the vehicle belonged to the shooter.

Later in the morning, police identified the suspect as 21-year-old Jarid Haddock.

Murray warned the public not to approach the suspect if they see him. ‘This is a dangerous person and it’s random, so there is a danger to the community. We don’t have a motive, we don’t know why, so we will do everything we can to locate and apprehend that person.’

The shooting took place both inside and outside the Circle K convenience store in Yakima (Picture: AP)

About an hour after Haddock was identified, SWAT teams began surrounding a home near downtown Yakima, about two miles from the scene of the shooting.

Police also deployed at least one drone above the home, and have been broadcasting a message warning the suspect that they will use force if he does not come out.

Additionally, the suspect’s mother was on the scene with police officers and communicated with her son over a loudspeaker, NBC Nonstop Local reported.

Court records reveal that Haddock had recently completed a diversionary program in 2021. He was arrested on charges of theft of a motor vehicle, but his charges were dismissed when he completed the program.

Officers were called after reports of a gunman firing shots at a car (Picture: Eddie Mitchell) Police have arrested a man in connection with an armed incident in Hastings. Sussex Police received multiple reports of shots being fired towards a vehicle in Theaklen Drive around 7pm last night and of a man in possession of […]