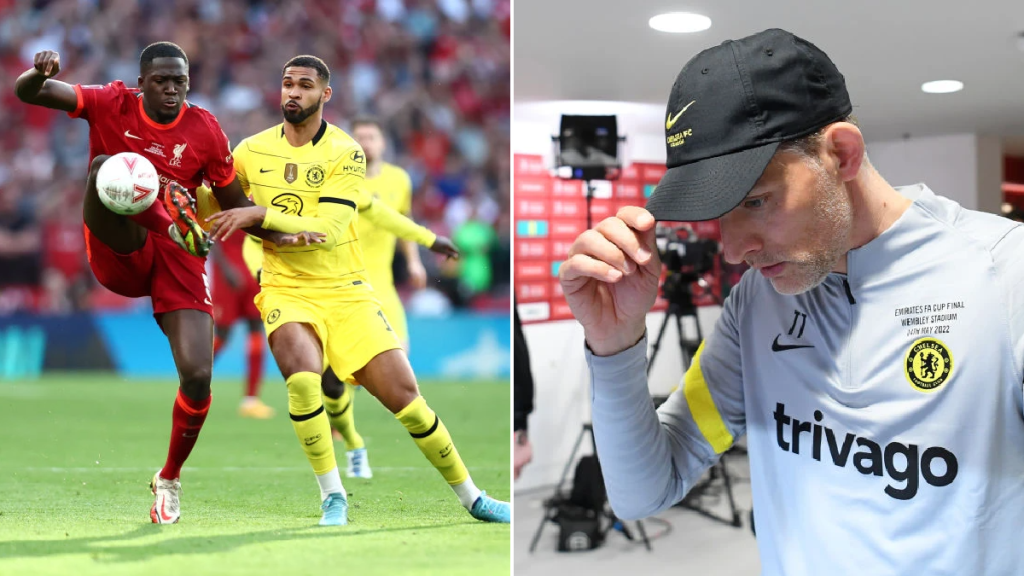 Thomas Tuchel has explained why he subbed off Ruben Loftus-Cheek just 15 minutes after bringing him on during Chelsea’s FA Cup final defeat to Liverpool.

Loftus-Cheek replaced Christian Pulisic at half-time of extra-time and slotted in as a centre forward as Chelsea chased a winner at Wembley.

But neither Chelsea or Liverpool could break the deadlock in Saturday’s final and Tuchel removed Loftus-Cheek just a few minutes before the penalty shootout, bringing on Ross Barkley.

Former Everton star Barkley took Chelsea’s fourth penalty and slotted his effort past Alisson, but the Blues nevertheless went on to lose the shootout 6-5.

Chelsea captain Cesar Azpilicueta and Blues academy graduate Mason Mount both missed from the spot as Tuchel’s side suffered a penalty shootout defeat to Liverpool for the second time this season.

Asked whether Loftus-Cheek was injured, Tuchel said: ‘No, that was purely for penalties.

‘Ruben has not got a good history, statistically, and Ross has so it was purely because of the penalties.’

Sofiia Karkadym fled her home in Lviv after Russia invaded (Picture: Instagram) A Ukrainian refugee has insisted ‘I’m no homewrecker’ after her UK host left his partner for her. Sofiia Karkadym, 22, moved in with Tony and Lorna Garnett after they offered to sponsor her UK stay, but ten days later the blonde IT worker was […]

Tchouameni is now firmly back on Real’s radar (Picture: Getty) Real Madrid will drastically alter their summer transfer plans after missing out on Kylian Mbappe with Monaco sensation Aurelien Tchouameni now a top target for the club. Mbappe’s future has been the subject of intense speculation with the forward’s contract set to expire at the […]

Russian thugs caught on CCTV shooting unarmed pensioner in the back

To view this video please enable JavaScript, and consider upgrading to a web browser that supports HTML5 video Sickening video footage of Russian soldiers shooting unarmed civilians in the back has come to light. CCTV cameras captured the moment two men were sprayed with bullets as they walked away from invading troops near Kyiv. The […]