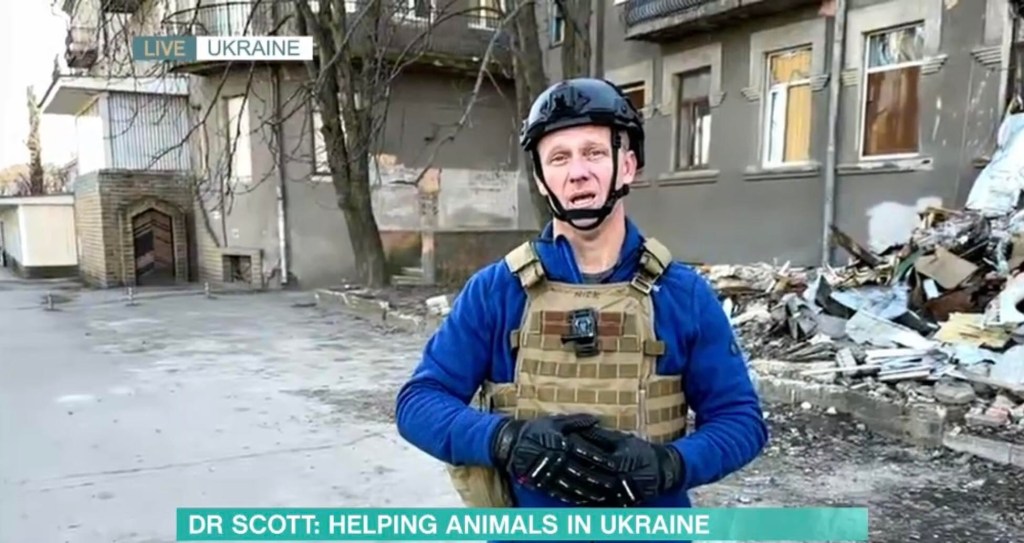 This Morning’s vet Dr Scott reported live from a destructed site in Ukraine, amid the ongoing war with Russia, where he explained why he was there: ‘to give animals a voice’.

The TV personality was there with a charity, to help animals who have been abandoned or left behind as people flee from the conflict.

Speaking to hosts Holly Willoughby and Phillip Schofield via video link, Dr Scott – wearing a bomb vest and hard hat – reported in front of destroyed buildings and rubble, where a few stray dogs were wandering around.

Stationed 20km from the front line, Dr Scott began: ‘We are close enough to be hit by artillery fire, I’ll show you this building right behind me which has been devastated.

‘The attacks are indiscriminate and there is a huge amount of damage, I have just been to the front line where we were delivering food aid and that’s why I’m here.

‘I’m working with a charity called Breaking The Chains, they are helping people that no one else can, they work alongside the military to provide vital food, and it’s not just food for people, of course, and the survival kits for people that exist with no electricity, no water, but it’s also the animals.

‘Some of these people have stayed in their villages, being bombarded because they couldn’t take their animals with them, and now they’re acting almost as custodians for the village’s animals.’

He continued: ‘Of course, it’s a massive humanitarian effort here, they are still needing so much, but the animals don’t have a voice and that’s why I’m here – to try and give them one’.

Dr Scott spoke to Holly and Phil in the studio (Picture: ITV)

Dr Scott’s visit comes after it was reported former Prime Minister Boris Johnson made an unofficial visit to Ukraine.

In a statement, Mr Johnson said: ‘It is a privilege to visit Ukraine at the invitation of president Zelensky. The suffering of the people of Ukraine has gone on for too long.

‘The only way to end this war is for Ukraine to win – and to win as fast as possible. This is the moment to double down and to give the Ukrainians all the tools they need to finish the job.

‘The sooner Putin fails, the better for Ukraine and for the whole world.’

This Morning airs weekdays from 10am on ITV.

Kylie Jenner marks son Aire’s 1st birthday with beautiful video after finally revealing his name: ‘You complete us my angel’

Your Boots and Tesco loyalty cards could help spot ovarian cancer, here’s how

Ovarian cancer is often misdiagnosed or diagnosed too late (Credit: Getty / rex) Early symptoms of ovarian cancer can go unnoticed, but people’s shopping habits could be used to spot the signs. Loyalty card data could indicate early warning signs which are often missed by GPs, according to a new study. The research looked at […]

Nintendo Switch 2 in 2024 – the facts and the speculation

What happens next? (pic: Nintendo) GameCentral attempts the impossible by trying to predict Nintendo’s future console plans and what comes after Zelda: Tears Of The Kingdom. The one thing you should never do when writing about video games is to try and predict Nintendo. Everyone knows that and everyone is always wrong when they end […]