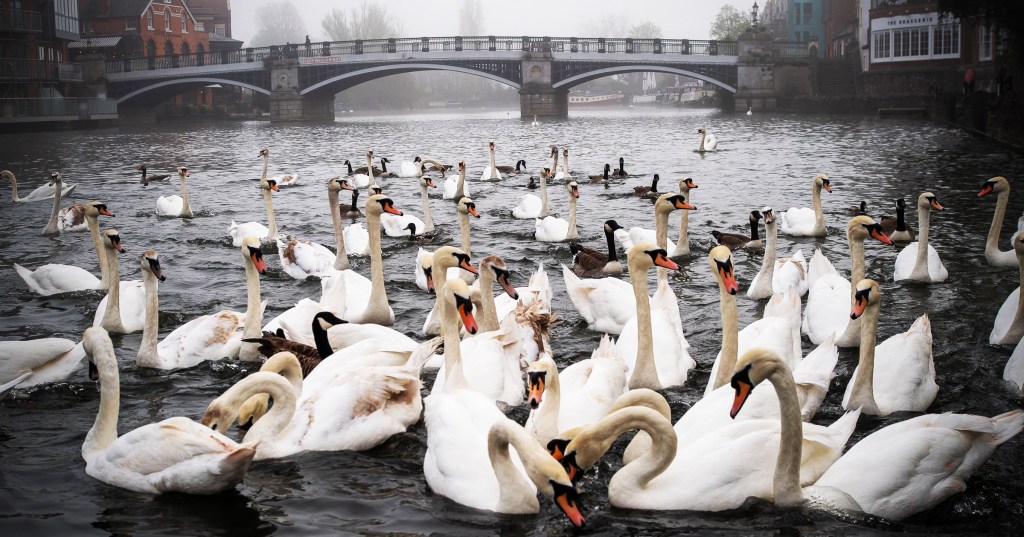 There were previously around 200 of the protected birds on the three-mile stretch of river by Windsor Castle (Picture: Rex)

Charities say they have pulled the bodies of 66 dead swans out of water by Windsor Castle over the last six days.

Bird flu is now thought to have wiped out a third of the flock of royal swans on the River Thames.

There were previously around 200 of the protected birds on the three-mile stretch of river that winds around Windsor Castle from Romney Lock to Boveney Lock near Dorney, in Berkshire.

Wendy Hermon, from the Swan Support charity, said: ‘I have been looking after the royal swans for 30 years beneath the Castle and I have never seen anything like this before.

‘In 2018 avian Flu killed more with about 70 swans lost, but that was over about a month. This time they are dying so fast they are literally dying right in front of your eyes.

‘On Sunday I was recovering the bodies of three swans that had died by Romney Lock and saw a swan that looked unwell in the water but it did not look as if in real distress.

‘But within 10 minutes it just rolled over and died right in front of me.’

She said the charity has 15 volunteers who are out on the riverbanks and on kayaks daily in protective gear.

Charities say they have pulled the bodies of 66 dead swans out of water over the past six days (Picture: Jamie Pyatt News Ltd)

They are being helped by Royal Windsor and Maidenhead Borough Council to make sure the birds are taken away in bags and immediately incinerated.

‘It is the speed that these swans are dying at that is frightening as they are literally dropping dead in the water all over the place and every day we are pulling them out,’ Wendy added.

‘There is nothing you can do as if you take them in for shelter and to treat them the influenza will kill all of the other birds so you just have to let nature run its cruel course.’

Signs are now being put up along the banks of the Thames warning visitors not to feed the swans and to stay away from the birds.

Bird flu is now thought to have wiped out a third of the flock of royal swans on the River Thames (Picture: Rex / Shutterstock)

‘King Charles takes an enormous interest in the wildlife on all the royal estates and beyond and particularly so at Windsor as he is now the head ranger.

‘He will be deeply upset about this major outbreak and the King’s Swan Marker David Barber, who did the job for 30 years for the Queen, will be keeping the Palace informed.’

The late Queen was informed in …read more

In need of a creativity boost? Dylan Coastal Resort in Carmarthen, Wales is the place to be

To remove creative blockages, you need three things: time, space, and inspiration. At the Dylan Coastal Resort in Carmarthen, Wales, you’ll find all three. This is a collection of luxury cottages where it’s easy to forget about work, your everyday life, and even the presence of other guests. Whether you’re cosied up under a super-soft […]

Rishi Sunak hinted there could be another winter of discontent (Picture: Samir Hussein/WireImage) High energy prices, soaring inflation, strikes and spiralling NHS waiting lists will present a ‘challenging’ winter, Rishi Sunak warned yesterday as the UK was forecast to suffer a deeper recession than allies. The prime minister braced his cabinet  for misery in the […]

Mike exchanged some cross words with Hancock (Credits: ITV/Shutterstock) Mike Tindall turned on Matt Hancock after an exchange with Sue Cleaver in a very tense moment in the I’m A Celebrity jungle. The trio are part of the 2022 cohort of celebs, which also includes Boy George and Chris Moyles, who are camping in the […]