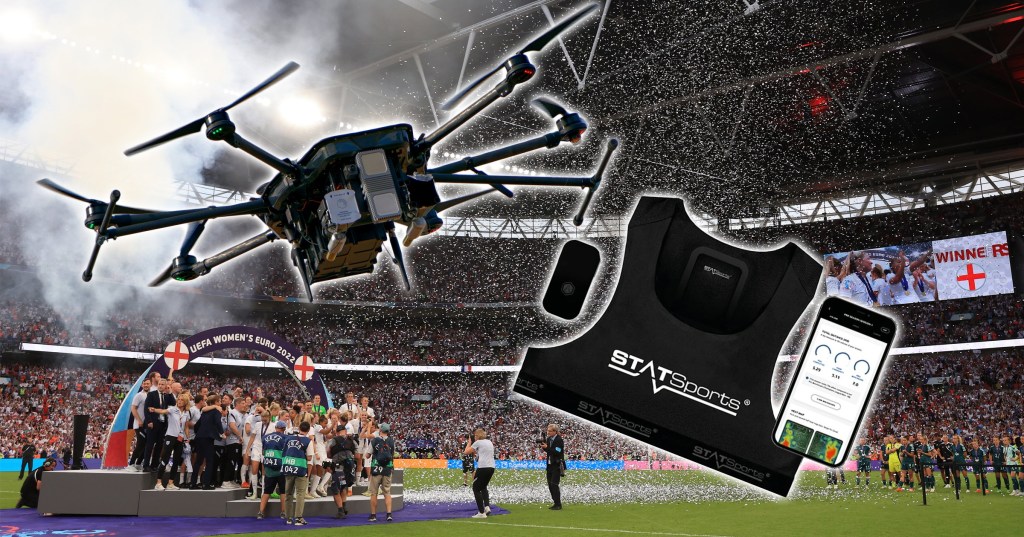 From flying security to scarves that feel, tech is taking off in football (Picture: Getty/ Supplied)

The days where football was just about the players, the pitch and the ball are long behind us.

And while we all have thoughts about VAR, it’s not the only way computers are getting involved in the sport.

From GPS-loaded bras to semi-automated offside tech, all kinds of cool gadgetry will play a huge role in this year’s football season.

Let’s take a look at what we can expect to see on the pitch.

We might still be bouncing for a while yet after the Lionesses were crowned European champions but it’s also a reminder that there’s domestic action set to resume in the women’s game too.

The Women’s Championship starts on August 20 with the Women’s Super League following a month later. Many of the players will likely be donning StatSports’ GPS sports bra, which is capable of capturing metrics like maximum speed, sprints and stress loads.

This connected bra is able to provide more security, includes removal cups to offer the best support for players and replaces StatSports’ unisex version of its GPS-packing smart garment.

The sports data company also counts Manchester City, Southampton and England women’s team as clients, so expect those senior sides to be donning these connected sports bras in the upcoming season.

One of the most contentious laws in the game should hopefully become less controversial at the World Cup in Qatar later this year, as Fifa has said it will use semi-automated offside technology at the tournament to offer the referee teams the best tech on field to make the right calls.

The new system uses a combination of artificial intelligence, tracking cameras mounted to the roof of stadiums and tracking sensors planted inside the official World Cup ball.

All three combine to deliver positional data that will generate automated offside alerts to video match officials. That alert is manually checked by those off-field officials before the man in the middle is notified.

It’s already been trialled at two Fifa tournaments with the hope that going semi-automated will make offside calls faster and, most vitally, more accurate.

A scarf that feels

An upgrade on the scarf you can pick up outside the ground, Manchester City and technology company Cisco have taken the stadium garment staple and given it powers to learn how supporters experience the on-pitch action.

The smart scarf is fitted with an EmotiBit sensor capable of tracking heart rate, temperature and emotional arousal through an EDA sensor to analyse reactions to key moments in the game.

Is the UK bracing for a hosepipe ban and when was the last one?

Hosepipes are off the cards for some (Picture: Getty Images) After the blazing, record-breaking heatwave that engulfed the UK in mid July, no one will be surprised by talk of a drought. Temperatures climbed up to 40ºC in some parts of the country, which has led to water companies sharing water-saving tips and the suggestion […]

Ah, Charlene – it’s the end of an era! Neighbours superfans reveal what the end of Ramsay Street means to them

The residents of Ramsay Street first hit our screens via BBC1 on 27 October 1986 (Picture: Fremantle Media/REX/Shutterstock) One fan, who wants only to be referred to as Adam, tells Metro.co.uk that he ‘struggled’ when he first heard the news, as the show was instrumental in saving his life.  Adam explains that after a period […]