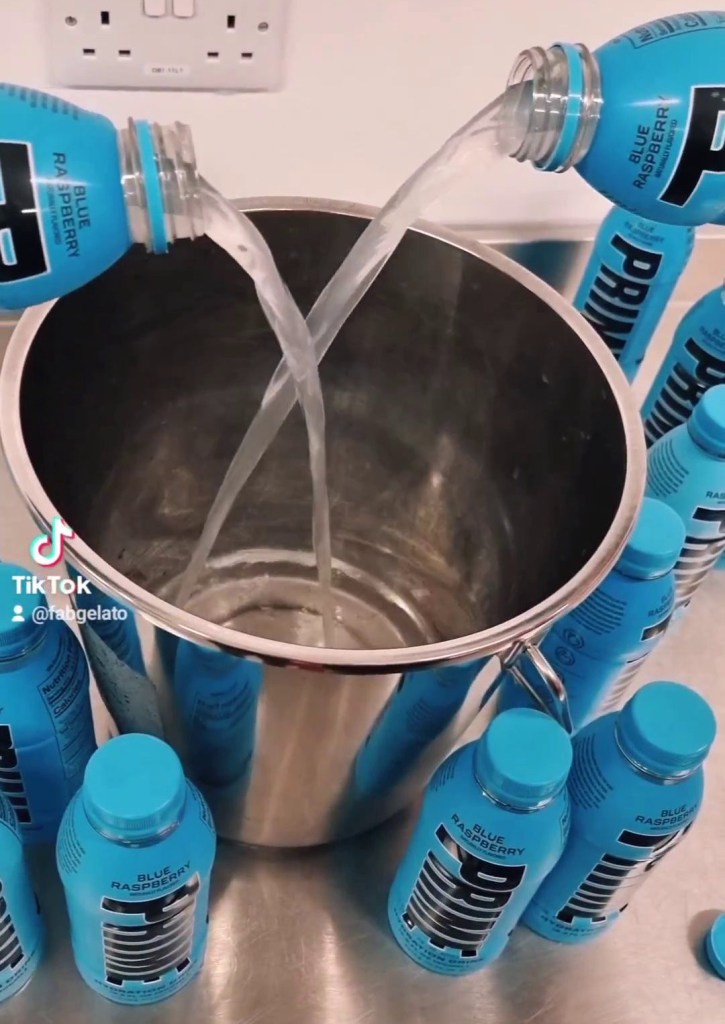 Tired of sipping your Prime drink from a plastic bottle like everyone else?

Well, one ice cream shop in Hertfordshire may have the answer to your prayers.

Fabio’s Gelato decided it would be a good idea to put twenty or so bottles of blue raspberry Prime through the churner.

Footage posted on the company’s TikTok page yesterday shows them blending the drink until it turns a shocking shade of Avatar blue.

A much more subtly-toned baby blue ice cream then emerges from the machine as a gelatiere tears off hunks with a plastic paddle.

In their Instagram caption, the shop makes an offer to KSI, the online personality who co-founded the drinks company with old rival Logan Paul: ‘Are you coming in for a scoop?’

Owner Fabio Vicenti, who has outlets in Hitchin and Letchworth, said: ‘When we saw the viral videos flooding social media with Prime, we knew we had to turn this into gelato.’

He said the most difficult part of the process was getting hold of enough bottles, as they are notoriously tricky to track down.

Fabio had to source around 20 bottles to use throughout the process (Picture: @fabgelato)

His final recipe is the result of careful experimentation (Picture: @fabgelato)

The first tubs of Prime gelato are due to go on sale this Saturday (Picture: @fabgelato)

Fabio said: ‘Chris from Chicken George managed to secure me 20 bottles, enough to taste test, then experiment with creating a Willy Wonka recipe and finally to create two pans of gelato for the shops.’

While the arrival of Prime at certain supermarkets can sometimes be signalled by ugly scenes of adult-on-child aggression, it remains to be seen if pandemonium will strike Fabio’s stores.

With the social media teaser now posted, Fabio is preparing for launch day.

He said: ‘It’s made with Prime, tastes like Prime…

‘We will leave the score of the drink down to our customers when it launches this Saturday!’

The dessert maestro is no stranger to headline-grabbing flavours, having whipped up gelato using Big Macs, Marmite and pigs in blankets in the past.

Ashton Kutcher is back in the world of rom-coms after over a decade (Picture: Axelle/Bauer-Griffin/FilmMagic) ‘Why is Ashton Kutcher suddenly doing rom-coms again after 12 years?’, you might ask. Well, the man himself has the answer. Ashton, 44, stars opposite Reese Witherspoon, 46, in Your Place or Mine, which premieres on Netflix on February 10. […]

Behati Prinsloo and Adam Levine have welcomed their third child together (Picture: Getty) Adam Levine and wife Behati Prinsloo have welcomed their third child together. The Maroon 5 frontman, 43, and Victoria’s Secret model, 34, have added to their family once again, months after confirming their baby news. An insider told People Magazine of their […]