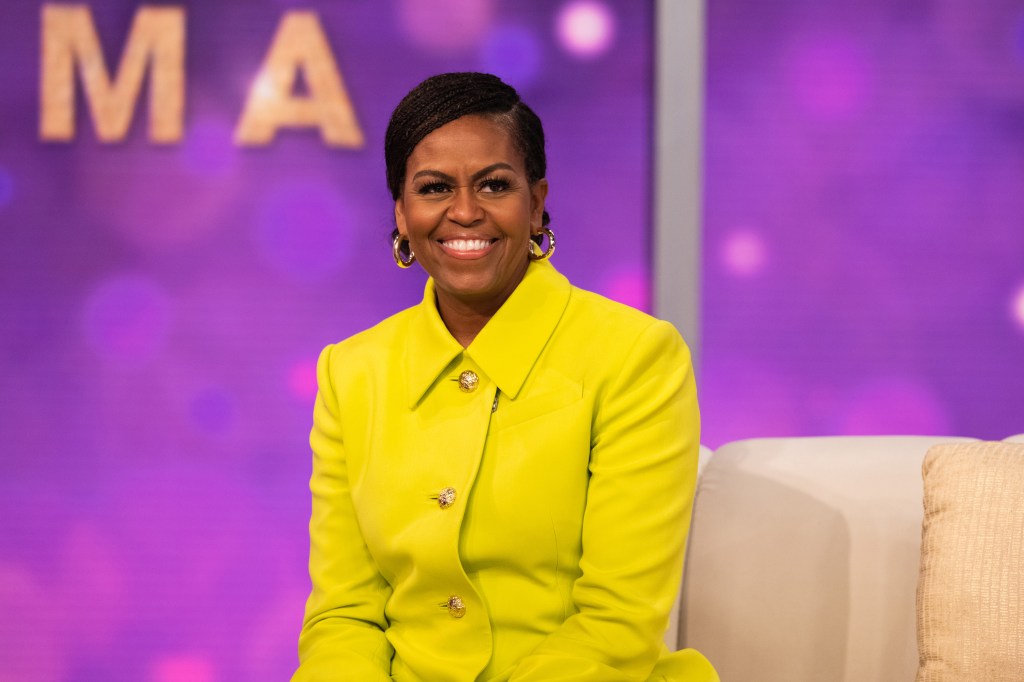 Unlike another extremely prominent American woman who likes to use their platform to dispense gooey life advice to everyone else, Michelle Obama doesn’t do Victim.

Which is just as well because this highly anticipated sequel to her global smash hit memoir Becoming is full of the sort of self regarding therapy gloop that in other less sensible hands might feel intolerable.

‘I’ve learned it’s ok to recognise that self worth comes wrapped in vulnerability,’ she writes, referring to the ‘personal tool box’ she built as a coping response to the pandemic, not to mention the wider seismic uncertainty unleashed by the Trump presidency.

Interestingly, this book was also conceived as a response to the quaking self doubt she experienced in the wave of the stratospheric success of Becoming.

For one of Obama’s biggest saving graces, both as America’s first First Lady of colour and later as an unquestionably talented writer, is her profound lack of airs and graces.

Amid the overwhelming demands and upheaval facing her in the weeks before she and Barack moved into the White House she includes the need to buy a pencil case for her daughter Sasha.

Michelle details what moving into the White House with two young daughters was like (Picture: Pete Souza/White House via Getty Images)

She revealed feeling insecure about her height as a child (Picture: Kevin Dietsch/Getty Images)

She talks about her unusual height as a child marking her out, but almost in the same breath acknowledges that this doesn’t make her special, but just like everyone else.

She understands that an important common ground is that nearly all of us, at times and to varying degrees, feel we don’t fit in. She doesn’t gloss over the complexities of modern life or pretend that invaluable coping mechanisms will affect meaningful change.

‘I’m not here to tell you that knitting [a pastime occupation she picked up during lockdown] is a cure for anything. It won’t end racism or demolish a virus or vanquish a depression’.

British readers don’t tend to take well to the sort of soapy quasi-meaningless sentences to which this book is undeniably prone. And The Light We Carry is sometimes infuriatingly abstract.

Yet at the same time it is often wise (on friendship, on work, on inequality, on achieving) and nearly always properly inclusive.

Even for those who ordinarily hate self-help books.

MORE : The Big Happiness Interview: Why writing a book will transform your life – and how to finally …read more

Craig David led the arrivals at the MOBO Awards red carpet alongside Sir Mo Farah (Picture: Shutterstock) Craig David and Sir Mo Farrah were suited and booted as they arrived at the Mobo Awards 2022 red carpet ahead of the event’s 25th-anniversary ceremony on Wednesday.  Founded by Kanya King in 1996, the celebration of artists […]

To view this video please enable JavaScript, and consider upgrading to a web browser that supports HTML5 video Mike Tindall sure knows how to bring his I’m A Celebrity 2022 campmates back together, and he’s done it again during an intimate dinner attended by the co-stars in Australia. On Sunday night, former Lioness Jill Scott […]

The tweets targeted footballers like Marcus Rashford and Bukayo Saka (Picture: The FA/The FA via Getty Images) Twitter seems to be doing nothing about the racist slurs against footballers of colour, in the ongoing World Cup. With most of its content moderation staff sacked, Elon Musk’s Twitter is becoming a hotbed for hates peech that […]