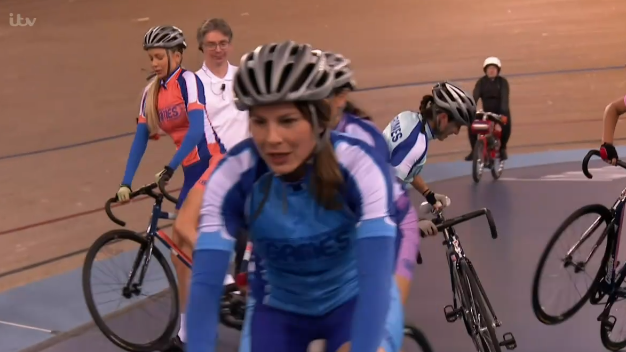 It was complete chaos on ITV’s The Games as multiple racers tumbled to the floor for a false start (Picture: ITV)

The Games got off to a chaotic start on Thursday as the women’s Keirin race featured several crashes. and left viewers questioning if the competitors even knew the rules of the game.

A VT of the training showed Olivia Atwood suffering a shoulder injury as she crashed her bike, and the live event, broadcast on ITV on Thursday evening, showed that practice does not always make perfect.

Chelcee Grimes caused a domino effect crash at the start as she pushed off on her bike and immediately fell over, causing chaos as those behind her were unable to get going and some toppling alongside her.

The organisers naturalised the race with a lap to get everyone back into their starting positions, but chaos continued when the gun went off.

Two competitors, possibly forgetting the rules through adrenaline or the messy start, briefly overtook the Derny on the velodrome, with the bike having to put on a burst of speed to overtake again.

And Lucrezia Millarini – who suffered a spectacular stumble over the line to clinch third place in yesterday’s 400m race – lost control of her bike and took another fall, sliding straight off the track and leaving her far behind the other competitors.

The race began with a domino effect crash (Picture: ITV)

The Games fans watching at home viewed the race through their fingers, with more than a few people taking to Twitter to comment on the crashes – and some wondering if the competitors knew the rules at all.

‘Probably a good idea in future to teach them the rules of the sport before letting them have a go?!,’ one person wrote.

Another fan suggested there should have been a restart as ‘no one had a clue what was going on.’

Lucrezia suffered another fall and slid straight off the track (Picture: ITV)

‘Wacky races at the Velodrome,’ another joked, while another described it as ‘an absolute mess.’

‘What an absolute shambles, nobody has a clue what’s happening,’ one fan began, before adding ‘Best event so far by a country mile.’

What an absolute shambles, nobody has a clue what’s happening. Best event so far by a country mile #thegames

Probably a good idea in future to teach them the rules of the sport before letting them have a go?!#TheGames pic.twitter.com/ZRQqq1UWM9

wacky races at the velodrome #TheGames

#TheGames wth ?!? Surely it should of been a restart ? No one had a clue what was going on !

#TheGames @itv cycling looking iffy and dangerous… apart from 3 celebrities still on the bikes so far rest wipe out !! pic.twitter.com/zNDyKViiph

Dame Deborah James ‘gutted’ she will not see new book published: ‘It is still long after I’m flying high’

Dame Deborah wrote she will be ‘flying high’ when the book is released (Pictures: Instagram / Deborah James) Dame Deborah James has said she is ‘gutted’ she will not be alive to see her second book published. The You Me And The Big C podcast host, also known as Bowelbabe, recently revealed she’s receiving end of […]

Johnny Depp trial: Disney executive unsure of whether actor will return for Pirates of the Caribbean 6