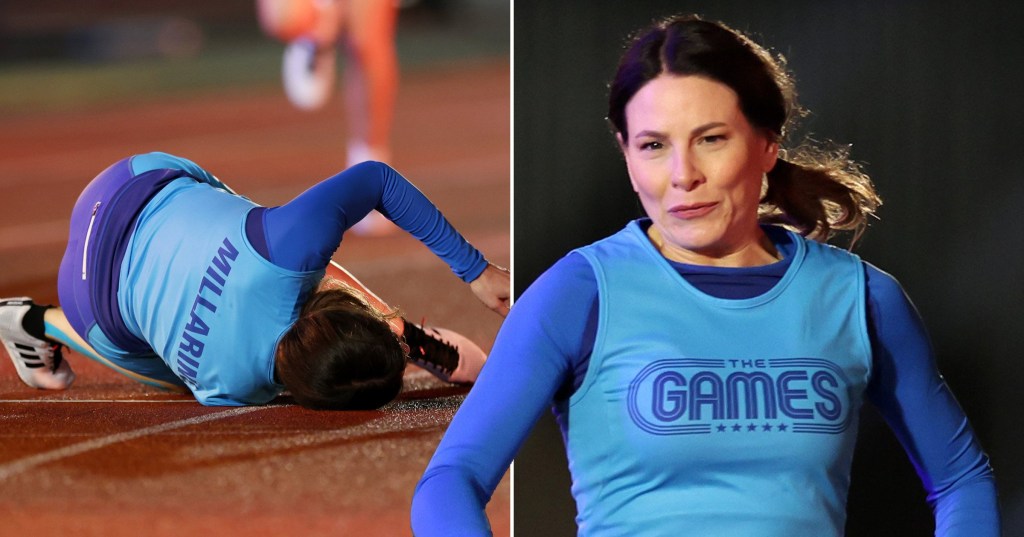 ITV newsreader Lucrezia Millarini suffered an almighty fall right at the finish line on Wednesday’s episode of The Games.

The former Channel 4 favourite, which sees celebrities compete in Olympic Games-style events, has returned to our screens this year after a long break away, with Holly Willoughby and Freddie Flintoof presenting.

Now airing on ITV, the live competition is set to air daily for a week, with the finale coming on Friday, 13 May when the top competitors will be awarded their well-deserved glory.

It was hardly a neck-and-neck competition, with Chelcee Grimes coming in first place a full six seconds before anyone else crossed the line.

However the fight for second place between Lucrezia and Rebecca Sarker looked to be anyone’s game at first – until Lucrezia took a tumble.

Just as she was about to cross the finish line, the reporter, who had previously suffered an ankle injury, slowed and then stumbled, landing on the line face-first.

But with Phoenix Gulzar-Brown hot on her heels, Lucrezia didn’t waste any time and rolled over the line, still on the ground, to clinch third place, with Phoenix coming in fourth.

Lucrezia lost out on second place but managed to flip herself over the line to come third (Picture: ITV)

Olivia Attwood took fifth place in the race, with Christine McGuinness coming along at her own pace to cross the finish line well over 10 seconds after everybody else, but with a smile on her face.

Chelcee’s incredibly impressive time was rightly praised by both the hosts, the other competitors and the public, but Lucrezia’s stumble also proved a major talking point of the show.

Even Lucrezia herself saw the funny side, as she took to Twitter to write: ‘Nothing quite like skidding over the finish line!

The ITV newsreader was right at the finish line when her legs went from under her (Picture: ITV/REX/Shutterstock)

However she celebrated her third-place position, adding she ‘made it though!’

Nothing quite like skidding over the finish line ð¤£ Ankles went, then legs! Made it though! 3rd! ð¥´ð¥³ @TheGamesTV #TheGames

Fans flocked to the comment section to praise Lucrezia for both her race and sense of humour, with one person writing that ‘NOBODY else could have done that in such style!’

They added that ‘unlike many you didn’t make out that the pain was ripping you apart!’

‘Fantastic effort Lucrezia,’ another wrote. ‘Made sure you got over the line for a well deserved bronze. True grit and detemination.’

Ian Wright has criticised Arsenal midfielder Granit Xhaka (Pictures: Getty/Sky Sports) Ian Wright has criticised Granit Xhaka’s ‘very strange’ interview after Arsenal’s defeat to Newcastle United and says the comments would have ‘upset’ his teammates. Arsenal’s top-four hopes are hanging by a thread after the Gunners were beaten 2-0 by Newcastle at St James’ Park. […]

Jurgen Klopp and Steven Gerrard meet again on Tuesday night (Picture: Getty Images) Liverpool travel to take on Aston Villa on Tuesday night as they look to keep their hopes of the Premier League title alive, although anything but a win will severely damage those hopes. The draw with Tottenham last time out has left […]