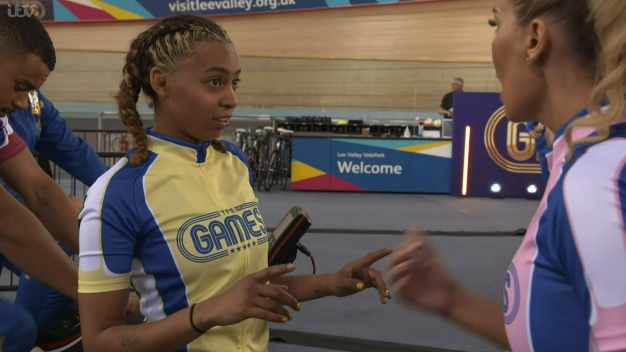 Phoenix Gulzar-Brown straight-up asked if the women knew the rules of the race after they won (Picture: ITV)

There was more drama on ITV’s The Games as Phoenix Gulzar-Brown and Rebecca Sarker kicked off at the result of the Keirin race.

On Thursday, the women took part in an absolutely chaotic cycle race, with multiple crashes and viewers questioning if they even knew the rules.

Chelcee Grimes and Christine McGuinness had at one point both been ahead of the Derny bike- a massive no-no and completely against the rules.

However neither were disqualified, and went on to win first place and second place respectively.

The Grand Finale episode of The Games on Friday saw the aftermath of the controversial race, with Rebecca and Phoenix facing off against Chelcee and Christine.

Christine McGuinness attempted to explain to Rebecca Sarker what happened that made her break the rules (Picture: ITV)

Approaching the women after the race, influencer Phoenix, who is the daughter of Spice Girl Mel B, said: ‘You guys know you’re not supposed to overtake the dernby right? Don’t do that. You know that right?’

She pointed out that if Chelcee and Christine had been disqualified, Rebecca would have come in first.

She added they ‘don’t want to change’ the result, ‘we just want good sportsmanship.’

Chelcee and Rebecca were less than pleased with the results (Picture: ITV)

In a quip to Chelcee as she walked away, Phoenix said: ‘Anyway, you came first so it doesn’t matter.’

‘No need to argue,’ she added, after arguing.

Phoenix and Rebecca were later seen complaining to a member of staff, however he shut them down, saying Christine and Chelcee weren’t ahead of the bike for too long.

In his opinion, he said, it hadn’t made a difference to the results of the race.

The pair were seen arguing with staff after the race (Picture: ITV)

Rebecca would have come in first had the women been disqualified (Picture: ITV)

Rebecca insisted they had been ahead of the bike for longer than a ‘short time,’ as she was behind them and saw it happen, but the staff member insisted the results would not be changed.

‘They overtook it when they weren’t supposed to,’ Phoenix told the camera later.

‘If you want to win, it’s better to win fair than to win dirty, and they did win dirty,’ she shrugged, before adding ‘they had a good race.’

It’s not the first time Chelcee and Phoenix have locked horns over results, with Phoenix previously raging at a photo finish that needed a second check from judges.

The Games, formerly a Channel 4 favourite, returned to our screens this year after a long break away, with Holly Willoughby and Freddie Flintoff presenting

‘If I’d left it and left it, who knows what could have happened’ (Picture: Diane Boothby / SWNS) A husband and wife, from Norfolk, both discovered they had cancer – just months apart – after his diagnosis prompted her to look into symptoms. When Paul Boothby, 69, was diagnosed with stage three bowel cancer in […]

Sadio Mane has been Liverpool’s best player in recent games (Picture: Getty) Jamie Carragher has labelled Sadio Mane his favourite Liverpool player and warned the forward not to join Bayern Munich. Since the turn of the year, Mane has been in top form for the Reds and scored the side’s winning goal in a 2-1 […]

Tom Parker’s widow shares bittersweet post after attending first wedding since his death: ‘I raised a glass to my boy’

Tom Parker’s widow Kelsey has spoken about life without him (Picture: Getty) Tom Parker’s widow, Kelsey, opened up about moving on following his death, in a bittersweet post. The Wanted star died at the end of March at the age of 33, after battling a brain tumour. After sharing her trepidation at attending a friend’s […]