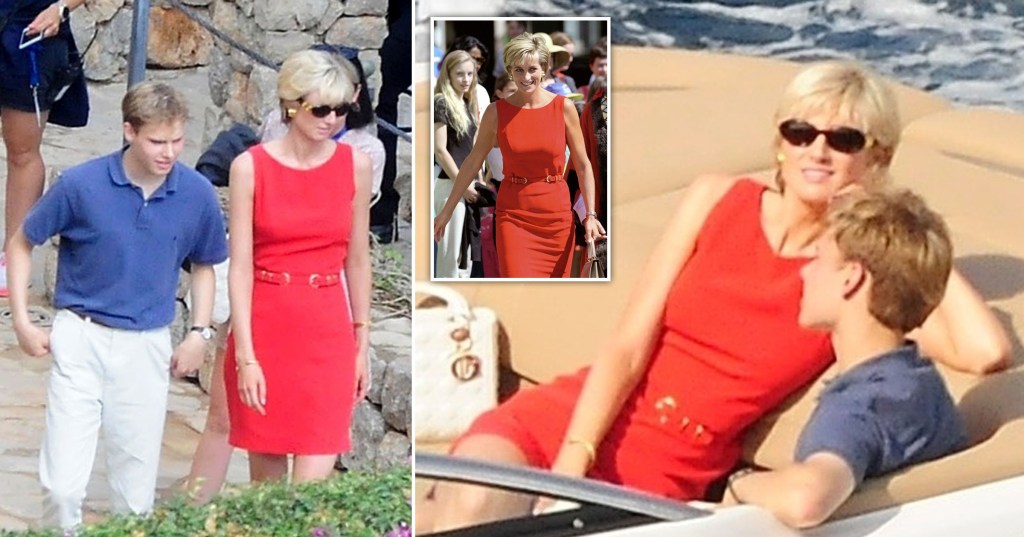 The three actors look so like their Royal counterparts (Picture: Splash News/Getty)

The Crown star Elizabeth Debicki bore an uncanny resemblance to Princess Diana as she filmed the late Royal’s family holiday with her two sons.

The 32-year-old takes over the role from Emma Corrin, while Dominic Cooper replaces Josh O’Connor as King Charles III in the blockbuster Netflix drama.

It’s not the first time the Australian actress has been spotted filming scenes for the show charting the history of the Royal family, having also been seen acting Princess Diana’s last public appearance before her death and on set at Dunsfold Aerodrome.

This week the Tenet star has been in Palma De Mallorca, Spain with Rufus Kampa, who plays a young Prince William, and Prince Harry actor Will Powell.

The trio were seen larking about on a boat as they recreated Princess Diana’s trip to the South of France in July 1997, where the family stayed on a yacht owned by her partner Dodi’s father Mohamed Al-Fayed.

The vacation took place just a month before Princess Diana and Dodi were killed in a car crash in Paris after they were being pursued by paparazzi.

Elizabeth wore sunglasses and a red shift dress, while Rufus and Will were in matching outfits, both sporting navy blue polo necks and white chinos.

The Great Gatsby actress held ‘Prince William’s’ hand as they climbed on board the luxury board floating on crystal blue seas.

The three actors were seen laughing and engaged in deep conversation as they sped around the bay.

The filming comes shortly after production for the juggernaut series was halted in a mark of respect after the Queen’s death.

A Netflix spokesperson confirmed to Metro.co.uk: ‘As a mark of respect, filming on The Crown was suspended today.

‘Filming will also be suspended on the day of Her Majesty The Queen’s funeral.’

Meanwhile, Edith Bowman teased in an interview with Metro.co.uk that the upcoming season of The Crown will be ‘mind-blowing.’

The DJ, who hosts The Crown podcast, said: ‘This season is going to blow people’s minds for so many reasons’.

What time is The Queen leaving Buckingham Palace for the final time and which royals will walk with her to Westminster Hall?

Her Majesty’s coffin arrived at Buckingham Palace last night – and will travel to Westminster Hall today (Picture: PA) The Royal Family and nation mourns Queen Elizabeth II, who died aged 96 on September 8. Her Majesty passed away peacefully at her beloved Balmoral, in Aberdeenshire, and lay in rest at St Giles’ Cathedral in […]

Luke Shaw hasn’t been playing regularly for Manchester United (Picture: Getty Images) Paul Merson is ‘shocked’ that Luke Shaw has been selected by Gareth Southgate in England’s latest squad. The Three Lions boss has picked a 28-man squad for Nations League matches against Italy and Germany. With the World Cup starting in November, players will […]

Ashley James is expecting her second child Ashley James has shared the exciting news that she’s pregnant with her second child.  The Made In Chelsea star is already a mother to son Alfie, born in January 2021, who she shares with boyfriend Tom Andrews.  In an Instagram post on Sunday, Ashley, 35, shared a sweet […]