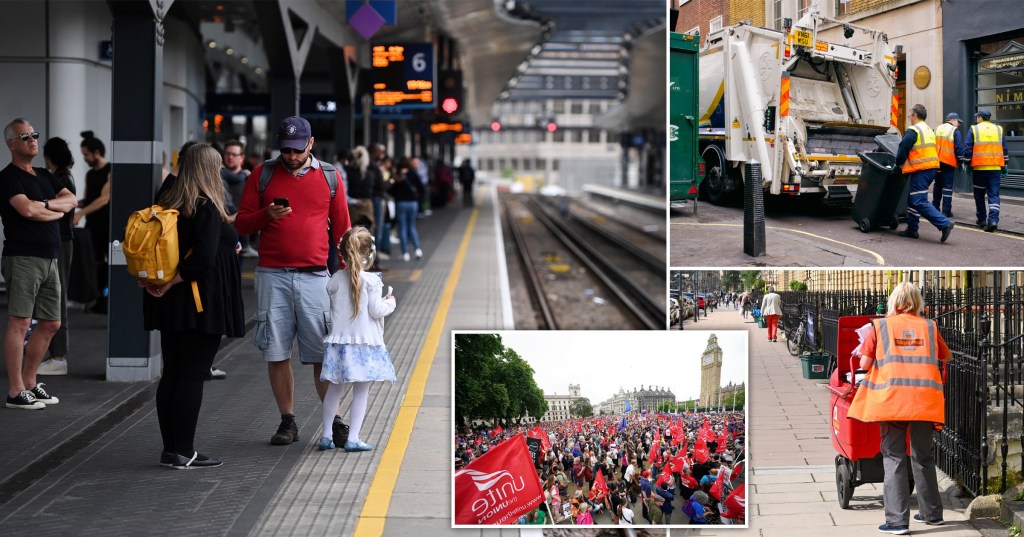 There could be a wave of national strikes this summer (Picture: PA / Getty Images / EPA)

The country is set for a week of disruption to train travel as the biggest rail strike in modern history is set to take place.

On top of this, teachers, doctors and binmen could also join in taking action this summer.

The NASUWT teaching union confirmed its 300,000 members would be balloted unless the government agrees to a 12% pay rise.

General secretary Patrick Roach said Britain faced an ‘existential emergency for the future of the teaching profession because of the cost-of-living crisis coupled with real-terms pay cuts’.

He added: ‘The government wrongly assumed teachers would simply stand by as they erode pay and strip our education system to the bone.

‘If a pay rise is not awarded, it will be won by our members in workplaces through industrial action.’

The National Education Union is also set to ballot 460,000 members which include support staff, teachers and lecturers unless pay rises alongside inflation.

The rail strikes will impact commuters and people travelling to events (Picture: EPA)

Joint general secretary Kevin Courtney said: ‘If there is no significant improvement on 3% – which will leave an 8% gap with inflation this year alone – we cannot avoid a ballot. The mood among teachers has changed.

‘Last year the issue was mainly workload. This year it is workload and pay.’

Unison, the biggest union, indicated half a million NHS workers could strike over the upcoming NHS pay offer which is expected in June, if the pay offer falls short of inflation.

The walkout would likely ground much of the NHS to a halt, with appointments and operations cancelled if doctors go on strike.

Days between strikes are also likely to be affected as well (Picture: EPA)

Protests have taken place over the cost of living crisis (Picture: PA)

It has led the national medical director of NHS England, Professor Sir Stephen Powis to say it is ‘vital’ people seek appointments and treatment despite the disruption.

General secretary Christina McAnea said: ‘The government has a simple choice. Either it makes a sensible pay award, investing in staff and services and reducing delays for patients or it risks a potential dispute, growing workforce shortages and increased suffering for the sick.’

The Unison, GMB and Unite unions have said local government staff in England, Wales and Northern Ireland should receive a pay increase of at least £2,000 each. Workers include rubbish collectors, library staff, teaching assistants and care workers.

Unite said it will support ‘any action’ by workers to achieve a pay rise.

Get in touch with our news team by …read more

Severe storms have caused the Michigan baby formula factory that closed for months earlier this year to shutter once again (Pictures: REX / Reuters) Severe flooding has halted the production of baby formula at a Michigan factory that contributed to a nationwide shortage after being closed for several months. In a statement Wednesday, Abbott Nutrition […]

Some fans were convinced Harry would show… to no avail (Picture: Avalon/Rex) Billie Eilish fans have showered the singer with praise following his history-making Glastonbury headliner performance, as she delivered an electric performance at the festival’s iconic Pyramid Stage. However, some couldn’t help but express their disappointment when Harry Styles didn’t make an appearance, following […]