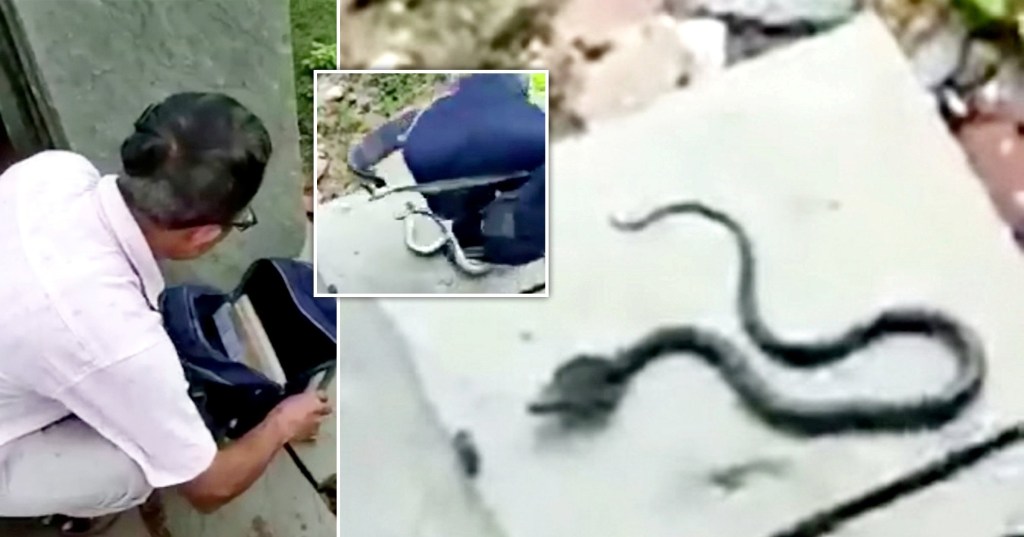 The cobra appeared to raise its head poised for attack (Picture: Newslions/SWNS)

A teacher was left horror struck after being forced to empty out a cobra from a pupil’s school bag in India.

Footage shows the man at Badoni School unzip the rucksack and tip the dangerous serpent out alongside all the other contents on Wednesday.

Pupil Uma Rajak had no idea the snake had slithered its way in to her bag and she was unaware that it was even inside until she reached in for her books.

The young girl and teacher were unharmed by the cobra, whose venom is powerful enough to kill up to 20 people from just one bite.

At one point, the snake looks like it is poised to attack once it makes its way out of the bag.

However, it eventually slithers away.

New England World Cup kit: Where to buy it and how much it costs

Aston Merrygold has married his long term love, Sarah Lou Richards (Picture: rex / @sarahlourichards) Congratulations are in order, after Aston Merrygold married his long-term partner, Sarah Lou Richards.  The JLS singer has been with the professional dancer for over a decade and they have two children together, Grayson Jax, four, and Macaulay Shay, two.  Now, the happy couple […]

Pregnant Kelly Osbourne defends decision not to breastfeed: ‘It has to be what’s best for me’

The star opened up on her pregancy so far and judgement she’s received (Picture: Facebook/Red Table Talk) Kelly Osbourne has defended her decision not to breastfeed in order to stay on medication vital for her wellbeing. The 37-year-old – daughter of Sharon and Ozzy Osbourne – is set to welcome her first child very soon, with […]