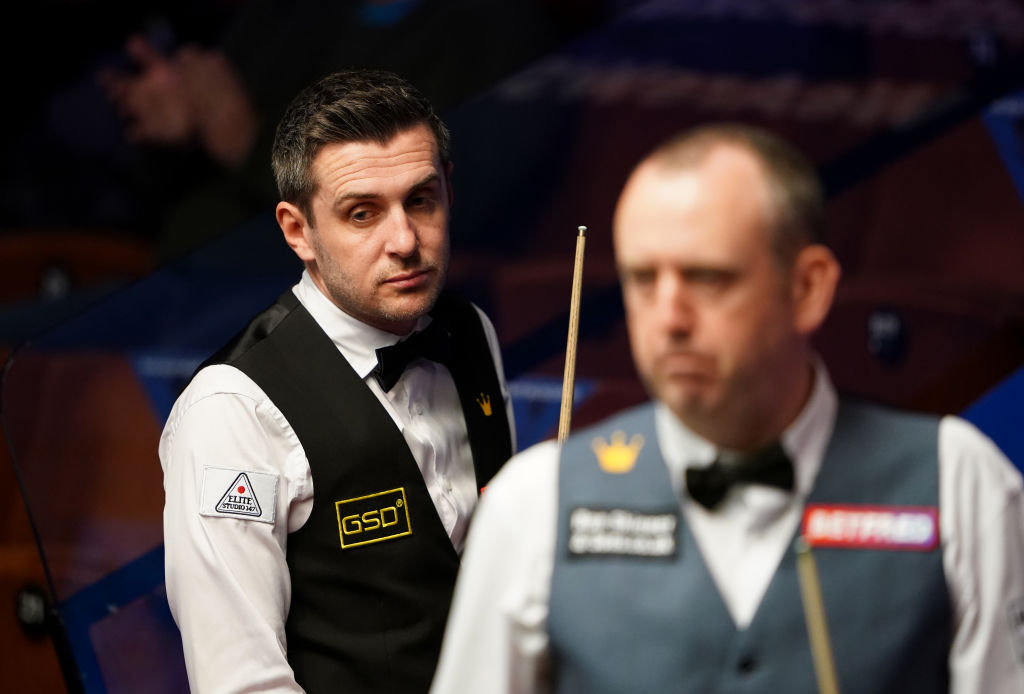 Mark Selby and Mark Williams have both fallen at the first hurdle (Picture: Getty Images)

A number of big names will miss out on a trip to Berlin this season after losing in qualifying for the German Masters in Leicester this week.

The main stages of the popular tournament begin on 31 January in the German capital, but it will be missing a string of the sport’s biggest names after upsets galore in qualifying.

Mark Williams became the latest top player to fall on Friday lunchtime after a 5-4 defeat to Belgian teenager Julien Leclercq, who will now take on Louis Heathcote for a trip to Germany.

Mark Selby had already been ousted, beaten by Chinese youngster Peng Yisong, with the 21-year-old beating the four-time world champion 5-4 to pick up just his second win as a professional.

That looked like it would be clearly the biggest shock, but newly crowned UK champion Mark Allen being whitewashed 5-0 by Zhao Jianbo may have blown it out of the water.

Allen is the player of the season so far, having also won the Northern Ireland Open and reached the British Open final, so any defeat to Zhao would have been surprising but a 5-0 drubbing seemed unthinkable.

Stuart Bingham and Ryan Day joined the run of top 16 players going out early, with the former losing out to Ben Woollaston and the Welshman beaten by his compatriot Michael White.

There was controversy elsewhere as David Gilbert conceded his game against Andy Hicks early, shaking hands with his opponent while trailing 3-2 in the race to five frames.

The former German Masters finalist has cut a downbeat figure this season and while he is such a good player he can still pick up wins, he is clearly not in the best frame of mind to play professional snooker.

Leaving the game early will land Gilbert in hot water, although hopefully the powers that be will be offering help to him as well as any disciplinary actions deemed necessary.

A World Snooker Tour statement read: ‘Gilbert has been referred to the WPBSA to consider whether there will be any disciplinary action.’

Stephen Hendry’s return to the professional tour continues to falter after being beaten 5-0 by Matthew Stevens in Leicester.

The seven-time world champion has not played in much this season, this only being his third match, but it was also his third defeat with just a solitary frame won so far this campaign.

The qualifying stage comes to an end on Saturday, with the 32-player line-up for Berlin set.

MORE : Michaela Tabb on the ‘challenging’ 900, her snooker legacy and life since the tour

Cristiano Ronaldo’s time at Manchester United is all but over (Getty) Real Madrid have already closed the door on the chance to sign Cristiano Ronaldo from Manchester United in the January transfer window, according to reports in Spain. Ronaldo appears to have already made his final appearance for United following his extensive interview with Piers […]

What’s in the Middle of Lidl this week? Top picks from the middle aisle

What deals can Lidl shoppers expect this week? (Picture: Metro.co.uk/Getty) Lidl has a number of offers in the middle aisle every week – called the Middle of Lidl. From BBQs to fitness gear, and scuba-diving equipment to weighted blankets – there are always some great deals to be found. But what does the legendary middle […]

Alan Stephenson needs to raise £18,000 to come home to the UK (Picture: Kristian Stephenson/MEN Media) A dad may be forced to have his leg amputated after a ‘scorpion bite’ gave him a flesh-eating disease in Thailand. Alan Stephenson, originally from Bilton but now lives in Hull, has had the skin and flesh stripped from […]