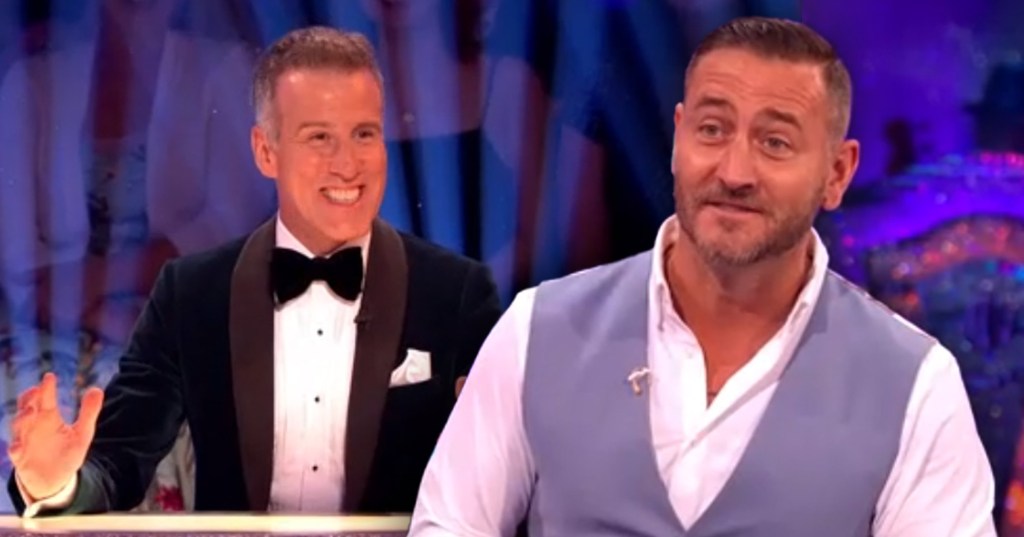 Anton Du Beke (left) and Will Mellor (right) have bumped into each other at the dump in the past (Picture: BBC)

Will Mellor might have a secret edge on the competition in this year’s Strictly Come Dancing as he revealed a connection to judge Anton Du Beke – they share a secret love of their local tip.

The Two Pints of Lager and a Packet of Crisps star made the unusual revelation on Friday’s launch show, where he met his professional partner Nancy Xu.

Appearing in front of the judging panel, Will confessed: ‘I’ve seen Anton about because he lives near the same village as me. Saw him at the tip! We love a tip!’

Anton concurred, adding: ‘We love the tip. It’s so cleansing to go to the tip! Favourite place in the world!’

Will joked: ’It’s one of my most favourite places to go. Here, have me stuff!’

Anton added: ‘It’s like a massive detox every time you go to the tip,’ while Will confirmed: ‘Very glamorous, very glamorous.’

It was then revealed that Will would be partnered with Nancy for this year’s competition as they take on 14 other pairings to try and win the glitterball trophy.

Will previously revealed that he has a special reason for choosing to take part in Strictly Come Dancing this year, explaining: ‘I lost my dad in 2020 and I just thought from then I’ve just got to grab life and I’ve got to do things and I’ve got to create new memories and my mindset changed, and that’s sort of one of the reasons why.

‘It’s my mum’s favourite show so she’s had it really tough over the last few years so I thought we’ll do this.’

Here’s hoping his and Anton’s shared love of the tip will result in an extra point or two on the judge’s paddle as well.

The Three Lions’ final World Cup squad is far from set in stone (Picture: Sky Sports) Gareth Southgate has opened the door for the likes of Marcus Rashford and Jadon Sancho to earn a spot in England’s World Cup squad, though another Manchester United star is set for a spell on the sidelines. The Three […]