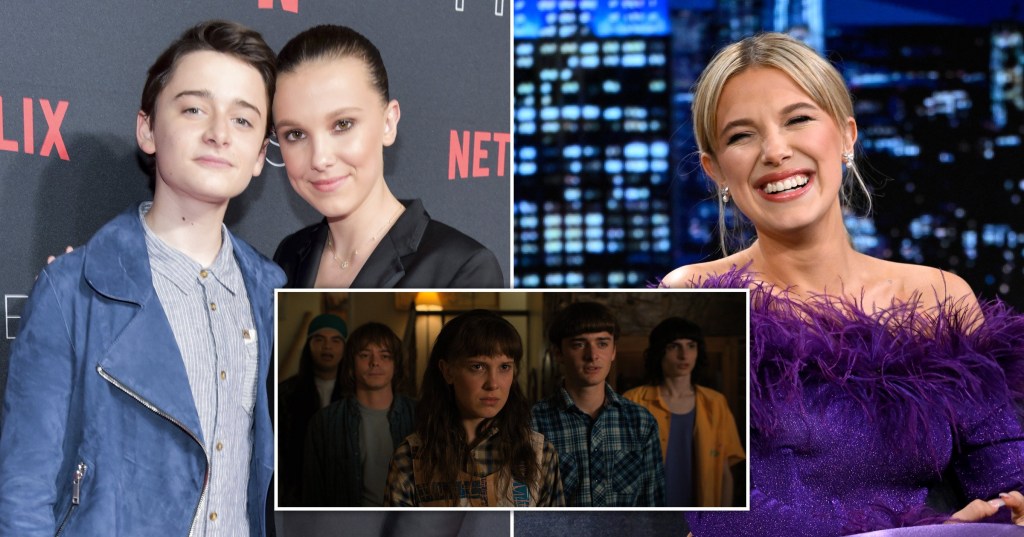 The actress, 18, has starred in the Netflix classic alongside Noah since they were both children, with the fourth series set to debut on the site this month.

Having known each other for years, Millie, Noah and the other main cast have formed deep friendships.

And what do friends do? They prank each other, of course.

The British actress appeared on The Tonight Show with Jimmy Fallon this week where she shared the prank that she – and pretty much the entire Stangers Things crew – played on Noah.

‘He’s the biggest prankster of them all,’ she said. ‘I too am pretty bad.’

‘We thought, as a crew, we needed to get him back.’

She revealed that, as she was preparing to leave the set, she called Noah at 4am pretending to cry and said he needed to come to say goodbye to her.

‘We had trash bins filled with water balloons all around, and we turned all the lights off at base camp,’ she said.

‘I called him, crying, “Noah I’m just so upset that you’re not here to say goodbye to me!”

The co-stars have developed a deep friendship from their time on the show (Picture: Getty)

As Noah headed to set to say goodbye to the ‘upset’ Millie, the actress told him she had a present for him – before she and the rest of the crew pelted him with water balloons.

‘I get him in the middle of the car park, and all of us, about 20 people, raid him,’ she laughed.

‘Absolutely invade him, and it’s bad. But then he got really aggressive with it, got me on the floor, I was like “God, I’m a girl!”‘

Host Jimmy, as well as the studio audience, were in peals of laughter at Millie’s story, particularly as they played a clip of the surprise water fight that showed Noah getting attacked on all sides.

It was recently reported that the each new episode cost an eye-watering $30million (£24.4million) to make.

With nine new episodes in the series, that would mean that the entire season cost approximately $270m (£209m).

The new series of Stranger Things is set to arrive on Netflix this month (Picture: Netflix)

Excitement is on the rise for season four of Stranger Things, with eagle-eyed fans recently realising that a teaser had subtly confirmed the return of a certain …read more

Lee Anderson has refused to back down over his comments (Picture: UK Parliament) An unrepentant Tory MP has doubled down on his claim that people forced to rely on food banks don’t know how to cook or budget. Lee Anderson was branded ‘out of touch’ for his remarks in the Commons yesterday, with critics saying […]

To view this video please enable JavaScript, and consider upgrading to a web browser that supports HTML5 video Amanda Holden has taken part in the viral Sprite challenge – and it’s safe to say she failed it pretty spectacularly.  The TikTok challenge which has been doing the rounds in recent weeks sees users attempt to […]