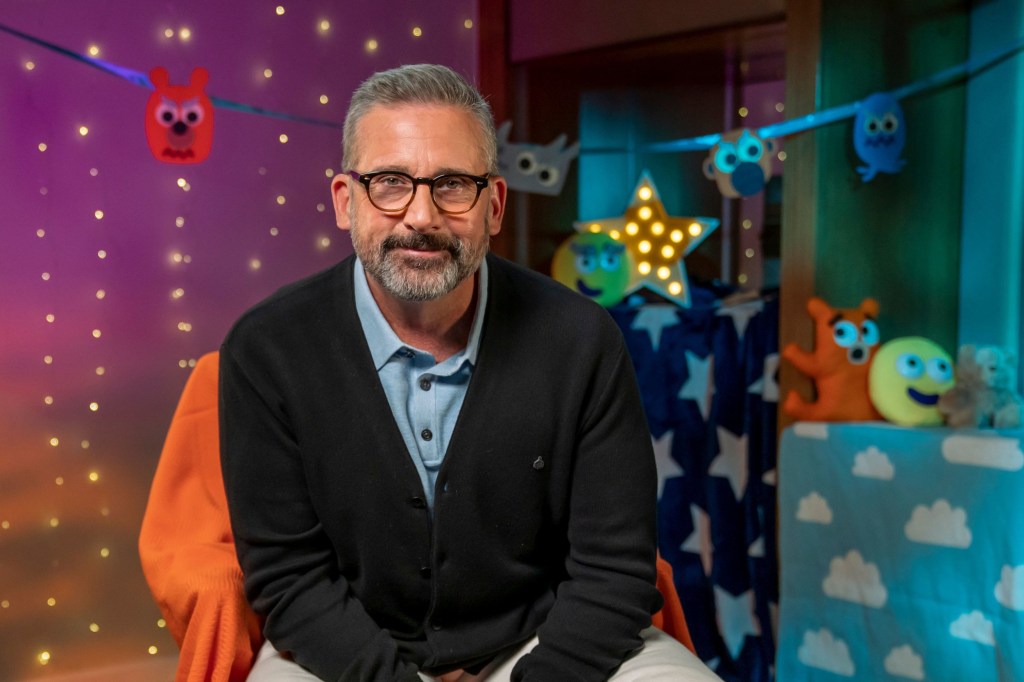 Steve Carell is following the likes of Harry Styles, Chris Hemsworth and Tom Hardy as he sat down to read a CBeebies Bedtime Story.

The comedian and actor – who has appeared on the big and small screens in the likes of The Office, Anchorman and The 40-Year Old Virgin – read The Eyebrows of Doom, telling the tale of a bear and his friends as they try to stop the eyebrows taking over the world by leaping from one unsuspecting animal to the next.

But it’s not actually the tale, as hilarious as it sounds, that had viewers in stitches.

Instead, fans couldn’t get over Steve’s pronunciation of ‘CBeebies’ as he starred on that very same channel.

In a resurfaced blooper a month after Steve actually read the story, the comedian says: ”Imagine never having watched CBG. CCGeebies. CB… Well, I can imagine it.’

Wait for it, he gets it right in the end! ð
@stevecarrell is reading CBEEBIES Bedtime Story!

Tweeting the clip, a fan wrote: ‘Cannot get over Steve Carell trying to pronounce CBeebies.’

Another penned: ‘I did not have “Steve Carell will be on Cbeebies” on my 2022 Bingo Card but here we are.’

Iâve heard that heâs a big fan of CCGGBGeebies.

Another referenced his The Office character Michael Scott, attaching the ‘I Tried’ meme.

Someone else joked: ‘He’s got the CBheebegeebies!’

Ahead of his appearance, the dad-of-two – who has 21-year-old daughter Elisabeth Anne and 18-year-old son Johnny with his wife Nancy Carell – also answered some fan questions on Twitter to promote the show.

One viewer has given a lot of thought to where characters without clothes keep their phones, and Steve replied: ‘You know what? That’s a really good question for any character that doesn’t wear clothes.

And another viewer revealed a misunderstanding with their daughter who thought they were looking for Duggee and the Squirrels in the forest rather than literal squirrels, which led to a 30-minute hunt for CBBC characters.

Timo Werner has re-joined RB Leipzig from Chelsea (Photo: RB Leipzig) Timo Werner has thanked Chelsea supporters in his farewell letter to the club after he completed his move back to RB Leipzig on Tuesday. The German striker has returned to the Bundesliga side on a four-year deal in a transfer worth a reported £25million, […]

‘Viking kids’ wreak havoc in chaotic This Morning interview as Rochelle Humes admits: ‘I don’t know what to do!’

To view this video please enable JavaScript, and consider upgrading to a web browser that supports HTML5 video Anything can happen on live television and This Morning proved exactly that on Monday’s episode. The ITV daytime show was plunged into chaos as Jenny Kell and her young sons Tom and Finn appeared in full costume […]

Practical potty training tips, how to get started and what not to do

Potty training is not a one size fits all approach (Picture: Getty) Perhaps you’ve noticed your toddler needs changing less or maybe they’ve started verbalising needing to go? Well, if so it may be time for them to experience the joy of mastering the toilet. While the thought of not needing to use nappies ever […]