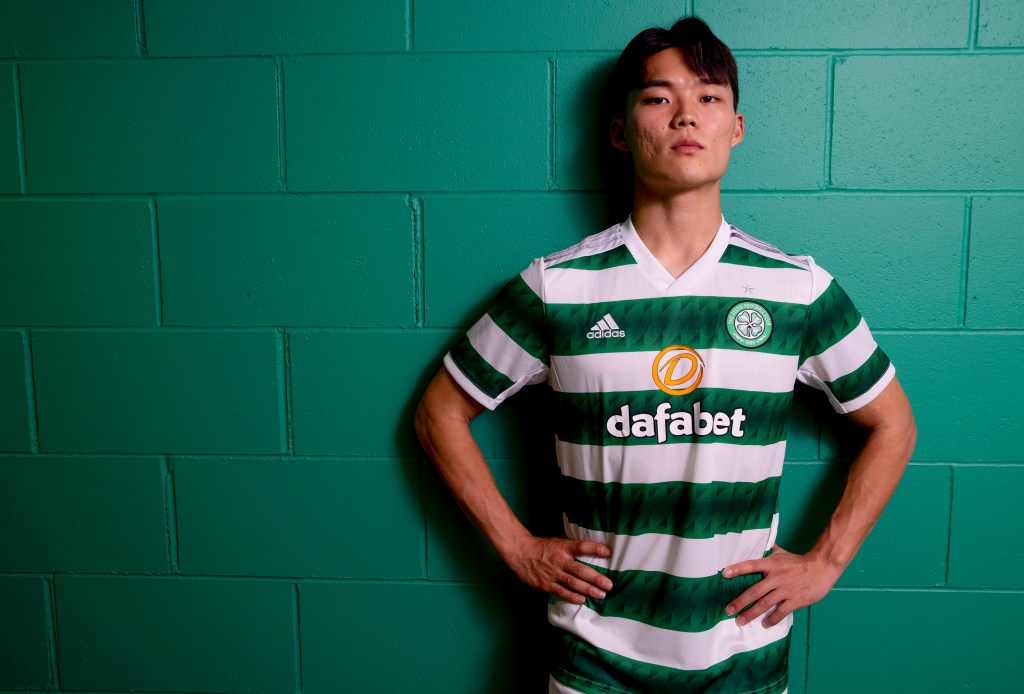 Celtic’s new South Korean signing Hyeon-gyu Oh said he ‘feels like he’s on a movie set’ after securing a ‘dream’ move to Parkhead.

The 21-year-old forward, who has one senior cap for his country, has moved to the Scottish champions for an undisclosed fee from K League 1 club Suwon Samsung Bluewings, where he has played since 2019.

Bluewings were reluctant to part with Oh, but the forward made it clear he wanted to take the next step of his career in Glasgow and he has now finalised a five-year deal with the Hoops, subject to international clearance.

Oh, who made his South Korea debut in a friendly against Iceland in November, said: ‘I’m happy to be playing at one of the top clubs and I’m delighted my dream has come true. I feel like I’m on a movie set and I’m really excited to be in the city and I’m looking forward to the upcoming days.

‘This is the moment I have dreamed of and I’m really excited to perform in front of the fans at the stadium. I’m a very aggressive player and I like to score lots of goals.

‘I want to score a lot of goals and win the league championship.’

Oh follows in the footsteps of compatriots Ki Sung-Yueng, who had a successful two-and-a-half-year spell at Celtic and Cha Du-Ri who featured 31 times over two seasons for the Hoops.

Ho added: ‘Ki Sung-Yueng and Cha Du-Ri are two of the players I respect the most. I have seen them playing for Celtic and I’m now happy to have the Celtic badge on my chest and to be working with the team on its goals.’

Parkhead boss Ange Postecoglou was impressed by Oh’s ‘determination’ to join Celtic after a protracted process.

‘We are delighted to bring Oh to Celtic,’

Postecoglou said. ‘He is a young, talented striker with great attributes and someone who is ready to take the next stage in his career – a player who is hungry, eager to develop and to achieve success.

‘I have watched Oh for some time and he is the striker I really wanted as I think he will be a great fit in our squad. He’s all-action, he gets his hands dirty, he works hard and he loves a goal. Really importantly, I know he had his heart set on joining us too and that his own perseverance has been crucial in making this deal happen, so his determination to join Celtic has been very clear.

‘We are really pleased to welcome him to the club and look forward to working with him and settling him into our squad. The other challenging bit with Korean players is that they have to do national service, and one of the advantages of Oh is that he’s already done it.

‘He did his national service as a young …read more

Enzo Fernandez is keen to join Chelsea before Tuesday’s transfer deadline (LightRocket via Getty) Benfica midfielder Enzo Fernandez is now pushing to join Chelsea before the end of the January transfer window, according to reports in Portugal. Chelsea have been negotiating with Benfica for several weeks but have been unable to agree a deal with […]

Maguire has played a bit-part role at Old Trafford this season (Picture: Getty) Inter Milan have enquired into a loan move for Manchester United captain Harry Maguire. The United skipper has started just two league games since being dropped by Erik ten Hag in August with Raphael Varane and Lisandro Martinez the manager’s firm first-choice […]