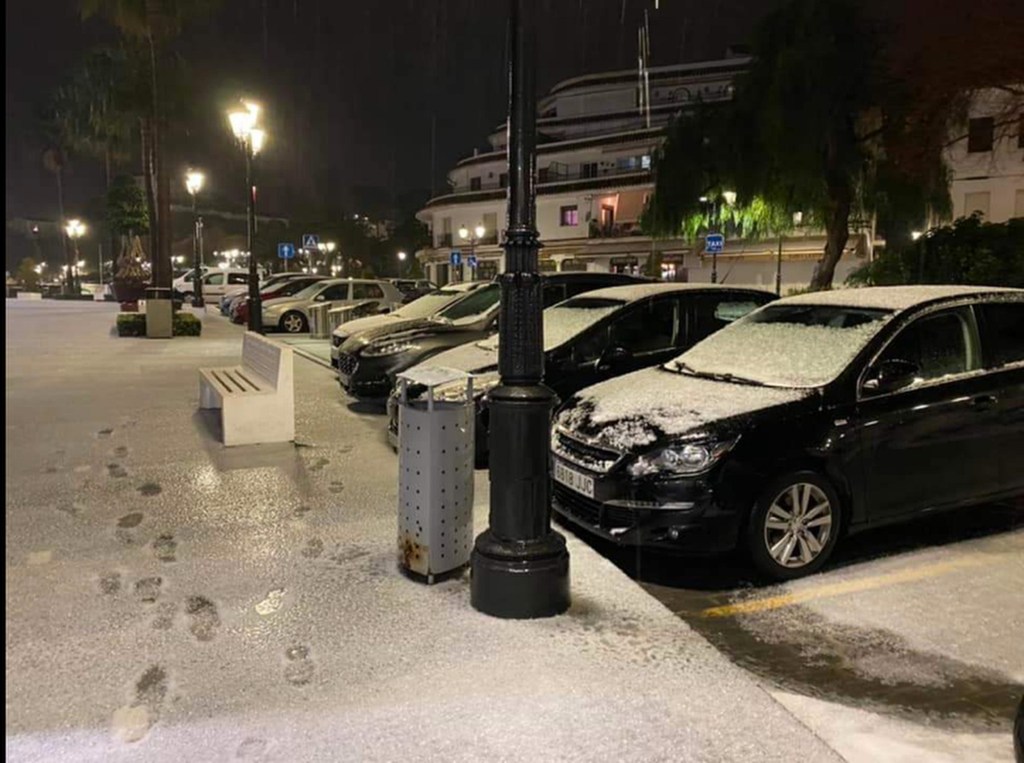 The Costa Del Sol has been blanketed with a thick layer of snow less than a month after it registered record-breaking temperatures.

The Spanish coastal strip recently experienced its warmest winter since records began, with temperatures reaching highs of 23°C on Christmas Day in Valencia and Castellon.

Average temperatures in the area were up a staggering seven degrees throughout December and the start of January, with the northern Spanish city of Bilbao – not traditionally known as a winter sun destination – clocking in at a scorching 25.1°C on New Year’s Day.

But just a few short weeks after experiencing the second-hottest winter since 1968, temperatures suddenly plummeted across the region after it was battered by a heavy storm which brought torrential rain, hail and even snow to the Costa del Sol.

Heavy rain pummelled Malaga City as the storm made its way down the coast at around 6pm yesterday, while nearby districts such as Vélez-Málaga, Valle-Niza and Rincón de la Victoria were pelted by hailstorms.

Hail was also reported in Torremolinos and Fuengirola, as well as in El Palo in Malaga city.

Temperatures have plummeted to below zero with experts forecasting an even greater drop next week (Picture: Solarpix)

The popular holiday spot recorded its hottest-ever winter less than a month ago (Picture:Google Maps)

Meanwhile snow began to fall in the town of Casabermeja, as well as in the Sierra de Mijas and Colmenar, prompting local police to warn drivers to be cautious on the roads.

The low temperatures have continued throughout Malaga this week, accompanied by a humid easterly wind which makes it feel even colder on coastal areas.

The temperature at Malaga airport was recorded as just 4.7°C on Tuesday morning, whereas inland temperatures have slumped to below zero in other parts of the region.

Forecasters have issued a yellow weather warning in response to the cold snap, and have warned temperatures could fall to as low as -6°C later this week.

Meanwhile more snow has been forecast at heights above 600 metres, and similar warnings have been issued in Cordoba and Granada.

The last time it snowed in the region was in January 2021, when the beaches were blanketed with enormous hailstones.

True side effects of coming off anti-depressants to be investigated

More than eight million people in the UK are prescribed antidepressants for depression or anxiety (Picture: Getty Images/EyeEm) Coming off anti-depressants can be a terrifying prospect for many struggling with their mental health. Some fear side-effects such as severe mood swings, or worry about coping without the pills at all. Antidepressants come in many forms, […]

Eubank Jr was floored in the fourth round (Picture: Getty) Roy Jones Jr has supported the theory that Liam Smith used an illegal elbow to beat Chris Eubank Jr on Saturday night while also taking a swipe at promoter Eddie Hearn. Smith produced a major upset in Manchester at the weekend, stopping his rival in […]

What will Nick do? (Picture: ITV) In the wake of massive revelations in Coronation Street that Damon Hay (Ciaran Griffiths) is Harvey Gaskell (Will Mellor)’s brother and he’s using the bistro as a front to deal drugs, Leanne Battersby (Jane Danson) is not a happy woman. Harvey Gaskell previously made her life hell when he […]