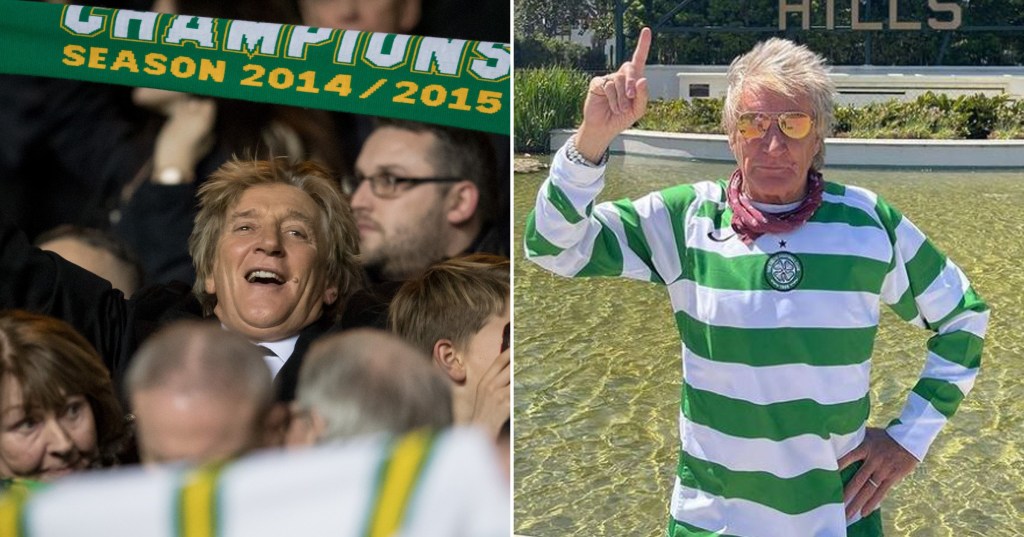 Find us a bigger Celtic fan than Sir Rod Stewart, we dare you (Picture: Instagram/REX)

The music icon is in high spirits after the team drew with Dundee United, so of course he had to congratulate them, Sir Rod Stewart style.

They reclaimed the Scottish Premiership title from Rangers on Wednesday, who previously prevented Celtic from winning 10 titles in a row.

But thankfully for Sir Rod, they’re back on top form, with the Maggie May singer posing in their kit as he offered his congratulations.

Sir Rod smiled for a snap in front of a Beverley Hills sign, which is where he lives.

He wore the instantly recognisable green and white striped shirt, but would it even be Sir Rod without a bandana and a super cool pair of sunnies too?

Oh, and of course his hairstyle was every inch rock and roll, spiked up.

The star wrote in his Instagram caption: ‘Celts are Champions again! @celticfc 💚’

There were plenty of fellow Celtic fans flooding his comments section with more green heart emoji and excited messages.

Elsewhere, it seems football has taken over Sir Rod’s life at the moment, as he proved you can still be down to Earth as a 77-year-old famous rocker.

There’s only one team for this rocker (Picture: Shutterstock)

The singer was seen pulling pints, stepping in as a ‘spare bartender’ for thirsty football fans recently.

He put in a shift at The Dirty Duchess in Glasgow – obviously wearing his green and white colours – with fans, naturally, fuming that they missed his spontaneous appearance.

Not only that, but Sir Rod has turned the football pitch at his mansion into a full-on training ground for his son.

The musician is very passionate about supporting his son’s under-12s team, the Junior Hoops, and is now offering them a home at his pad in Epping Forest, Essex.

His grand gesture for 10-year-old Aiden comes after the team were left without a training ground during the pandemic.

A source said: ‘Sadly, they lost their usual ground because of the pandemic and have had nowhere to train, so Rod stepped in. He has opened his house to the entire team, along with the coaches and parents, to allow them to train.’

They added to The Sun: ‘Rod doesn’t want his son or the other kids to suffer, so he’s turned his place into their official training ground.’

Dad goals, or what?

If you’ve got a celebrity story, video or pictures get in touch with the Metro.co.uk entertainment team by emailing us celebtips@metro.co.uk, calling 020 3615 2145 or by …read more

To view this video please enable JavaScript, and consider upgrading to a web browser that supports HTML5 video Amber Heard has testified that she and Johnny Depp ‘used a safe word’ in arguments they had during their marriage. On Monday, Heard, 36, returned to the stand to continue her testimony at the Fairfax County Courthouse […]

A ‘human action man’ left the Britain’s Got Talent judges completely stunned and amazed after his audition tonight, but it wasn’t his first (second, third or even fourth) time on a Got Talent stage, or his first performance in front of Simon Cowell. Tulga, 37, performed tricks with a 40kg plank of wood and left […]

Police have ordered residents to avoid the area while the investigation continues (Picture: Getty/iImages) German police are hunting a suspect who ‘launched a crossbow attack on a school’. Shots were fired in the northern city of Bremerhaven, with at least one person severely injured according to reports. One person has been detained but another may […]