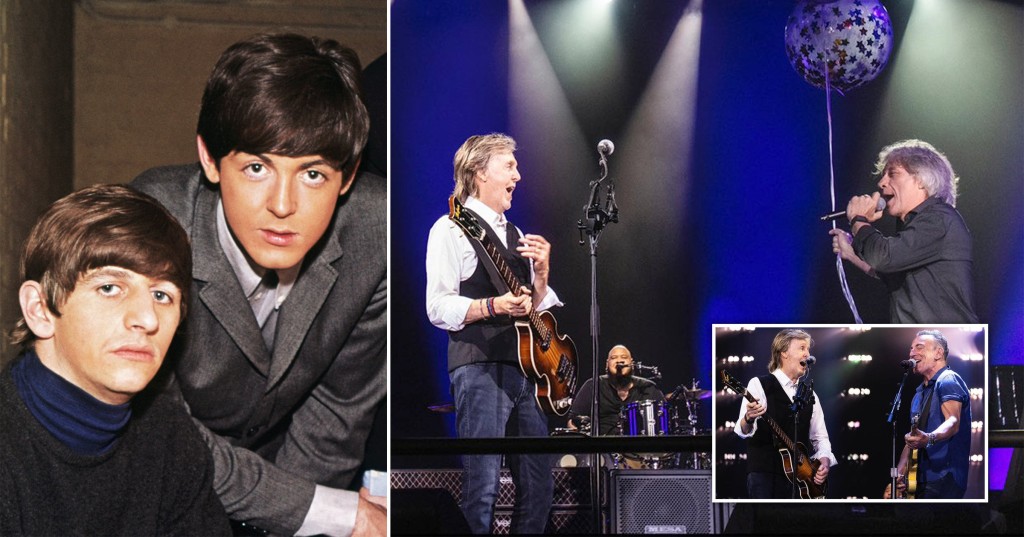 Sir Paul McCartney has seen his 80th birthday in in style, following a duet with Bruce Springsteen, a happy birthday serenade from Jon Bon Jovi and 50,000 fans and birthday wishes from his sole remaining Beatles bandmate, Sir Ringo Starr.

Sir Ringo sent his customary ‘peace and love’ well wishes to his long-standing friend and former bandmate on Saturday, his actual birthday, joining the throngs marking his milestone with birthday greetings, ahead of the star headlining Glastonbury next weekend.

The drummer, who turned 80 himself last year and this week was forced to postpone the end of his US tour after Covid diagoses in his team, also shared a photo where he flashed a ‘V’ sign for peace.

Sir Paul has been celebrating his birthday while on his Got Back tour in the US, and on Thursday was joined on stage by rock star Jon Bon Jovi – carrying balloons – in New Jersey, who sang Happy Birthday to him with the help of some 60,000 fans.

Referencing that performance, former UK prime minister Gordon Brown tweeted: ‘I think we would all like to sing Happy 80th Birthday to @PaulMcCartney today. My friend Jon Bon Jovi doing it in style here.’

Following Bon Jovi’s surprise appearance at the MetLife Stadium, New Jersey’s own Bruce Springsteen also took to the stage to jam a few songs with Sir Paul, including Glory Days.

‘Here’s to 80 more years of glory days,’ Springsteen announced to the crowd at the end of his appearance.

Next Saturday, Sir Paul will become Glastonbury’s oldest ever solo headliner when he takes to the Pyramid stage. He also topped the bill at the Somerset music festival in 2004.

Rolling Stones guitarist Ronnie Wood shared a series of photos of him and Sir Paul together throughout the years.

Want a new beauty product that doesn’t cost the earth? (Picture: Eye of Horus) Looking to replenish your clean beauty stores? Look no further than Eye of Horus, which offers sustainable makeup that doesn’t compromise on quality – and it’s up to 60% off in the sale. Eye of Horus is an Australian brand that […]