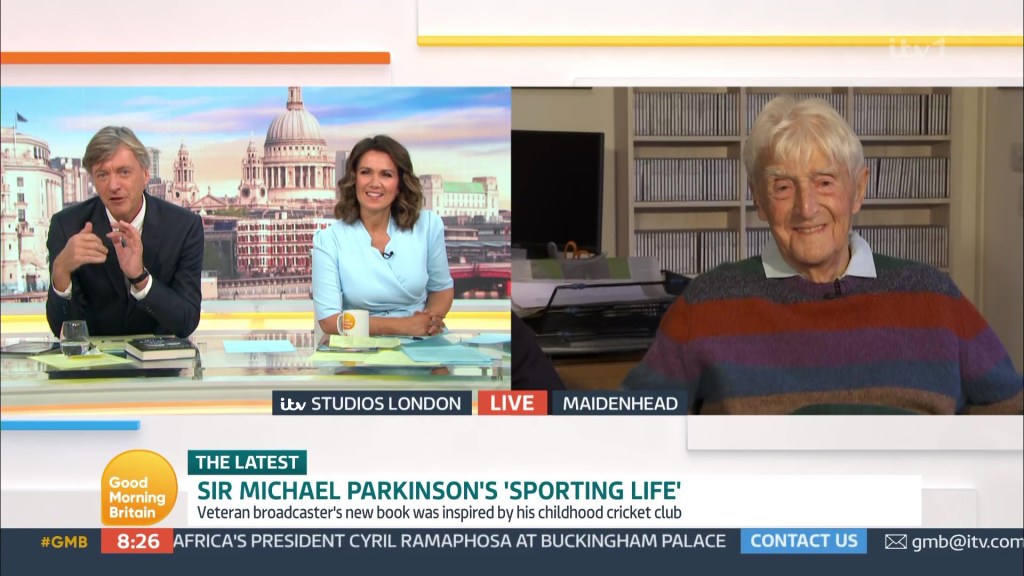 Sir Michael Parkinson has ripped into football and the Word Cup, claiming it has ‘nothing to do with anyone except bent millionaires.’

This year’s contest has been controversial for taking place in Qatar, where there are strict anti-LGBTQ+ laws and a severe lack of protections for women.

Several workers, including a 40-year-old British man, also died while constructing the stadium.

Stars, including Dua Lipa and Si Rod Stewart, have strongly condemned the human rights situation in the Arab host country, turning down lucrative offers to perform.

Meanwhile, comedian Joe Lycett gave David Beckham an ultimatum to drop his multimillion-pound contract to be an ambassador for Qatar, or he would otherwise shred £10,000.

The latest celeb to slam Fifa’s decision to hold the games in Qatar was legendary broadcaster Sir Michael Parkinson.

Appearing on Wednesday’s Good Morning Britain, the 87-year-old was asked by host Richard Madeley if he would want to interview FIFA president Gianni Infantino.

Sir Michael responded: ‘No, he’s beyond redemption. Let him crawl away and wither.’

The veteran interviewer then explained that the ‘trouble’ with the sport was that it had ‘gone beyond its meaning.’

He continued: ‘[It’s] transferred to another world that is totally unreal, it’s just too silly for words. The people who are running the game should be thoroughly ashamed.

Explaining football had a ‘noble background’, Sir Michael raged: ‘They think they’ve got it right but they’ve totally misunderstood its importance. They’ve created a totally false image. It has nothing to do with anyone except bent millionaires.’

One star who is travelling to Qatar is Robbie Williams, who will perform during the global event despite the country’s human rights issues.

Speaking out for the first time on the matter, Rock DJ singer Robbie passionately stood by his decision to perform at Doha Golf Club on December 8.

‘That being said, if we’re not condoning human rights abuses anywhere, then it would be the shortest tour the world has ever known. I wouldn’t even be able to perform in my own kitchen.’

Good Morning Britain airs weekdays from 6am on ITV.

If you’ve got a celebrity story, video or pictures get in touch with the Metro.co.uk entertainment team by emailing us celebtips@metro.co.uk, calling 020 3615 2145 or by visiting our Submit Stuff page …read more

The skeleton being excavated near Trevone, Cornwall, overlooking Newtrain Bay (Credits: Cornwall Council / SWNS) A 200-year-old skeleton of a suspected shipwreck victim have been found washed up on a beach. The remains of a human thought to be from an early 18th century sailor, were discovered on a footpath on the north Cornish coast. The remains […]

Things boiled over after the final press conference (Picture: Mark Robinson Matchroom) Dillian Whyte was involved in a tense confrontation with Jermaine Franklin’s promoter ahead of his fight against the undefeated American on Saturday. Whyte and Franklin came face-to-face following a final press conference on Thursday, joined by promoter Eddie Hearn on stage. But during […]

Stu wants everything to be perfect (Picture: ITV) As Yasmeen Nazir (Shelley King) goes about her day to day life in Coronation Street, her family and friends know she remains fragile when it comes to relationships. This is, of course, down to her past with Geoff (Ian Bartholomew). The abusive and controlling relationship Yasmeen was […]