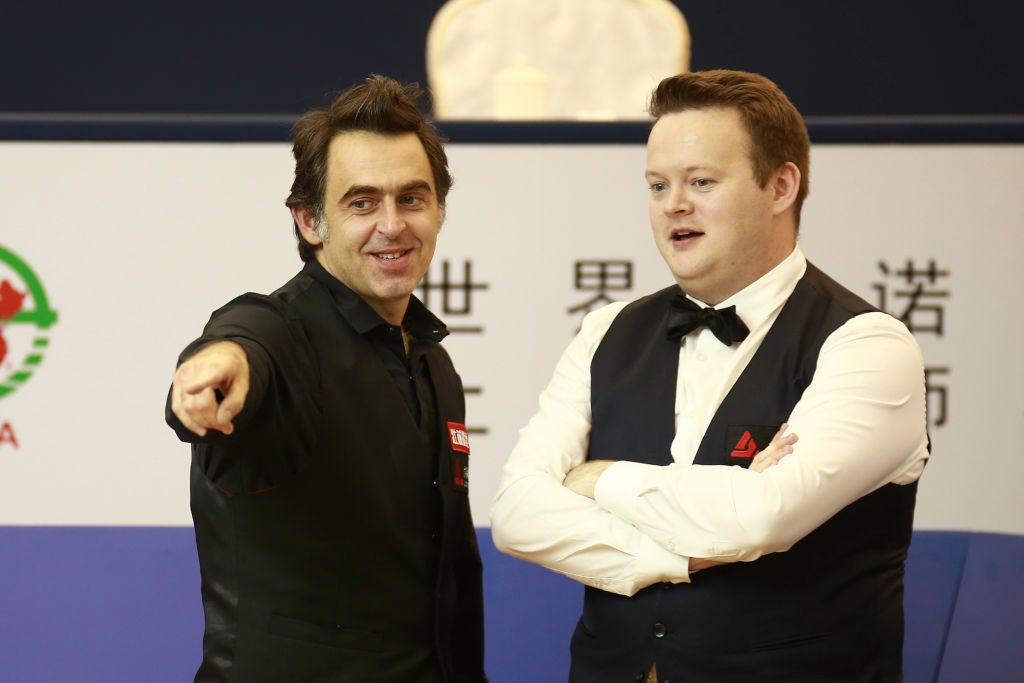 Ronnie O’Sullivan and Shaun Murphy do not quite see eye-to-eye (Picture: Getty Images)

Shaun Murphy believes Ronnie O’Sullivan has fallen short as an ambassador for snooker and feels he owes the game more than to talk it down, but does admit the Rocket is in a unique place in the sport.

The Magician spoke out at the UK Championship on his frustrations with O’Sullivan saying he doesn’t care about winning or losing snooker matches, and his irritation that the world champion does not speak more positively about his sport.

The Rocket was largely unmoved, responding: ‘I am just doing my own business, and I don’t care what they say about the game. I just don’t care and I cut off for a long time.

Murphy sympathises with O’Sullivan’s unique position in the game to some extent, saying few people in any sport can relate to the amount of success he has achieved, but remains frustrated that he does not promote the sport in a more positive light.

‘It is okay for him to say these things, to say how little the game means to him when you’ve achieved so much,’ Murphy said on his OneFourSeven Podcast.

‘There are only a handful of people who can put themselves in his shoes and have a go at imagining what life is like to have won seven World titles, Masters and UKs, achieved all these things.

‘I’m sure the game doesn’t mean as much to him the same as it does to pretty much everyone else. But he has to remember that he’s not just representing himself out there, he is representing the game as a whole and when he damages the game, he damages it for everybody. He owes the game a little bit more than that.’

Murphy acknowledges that O’Sullivan brings a huge amount to the table simply by playing the game, with audiences turning up and tuning him just to see him for decades.

O’Sullivan and Murphy have not played each other since 2019 (Picture: Getty Images)

However, the Magician thinks the Rocket could offer even more than just his sublime skills.

‘He is the game’s biggest draw, he moves the needle when he plays, they used to say that for Tiger Woods, you could see the viewing figures change when he was playing golf,’ said Shaun.

‘Ronnie is exactly the same, there’s no question about that at all, but he isn’t bigger than snooker. Snooker was here before him and it will be here after him.

‘Snooker is certainly more exciting and benefits from having someone like him in it, but you don’t have to be a rebel all the time. Sometimes it is okay to be a good ambassador and try to leave the game better than the day you took it up.

‘While Ronnie has exceeded expectations in every part of the game and facet of snooker on the table, …read more

The star has recently announced his Under the Influence European tour dates (Picture: Getty) Chris Brown is reportedly getting set to tour to Australia and New Zealand next year, which would mark his first trip Down Under after having his visa application denied in 2015. The singer was forced to eventually cancel his December One Hell […]

When could I’m A Celebrity All Stars air and who is rumoured to be taking part?

I’m A Celeb could be back sooner than you think (Picture: ITV) I’m A Celebrity… Get Me Out Of Here 2022 left fans with plenty to talk about over its run. May were shocked – including the campmates themselves – to see Tory MP Matt Hancock enter the jungle, while Olivia Attwood sadly had to […]

To view this video please enable JavaScript, and consider upgrading to a web browser that supports HTML5 video Kevin Sinfield has left viewers and BBC Breakfast presenters Charlie Stayt and Rachel Burden in hysterics after stopping mid-run for a toilet break… on live TV. The rugby league star was coming to the end of his […]