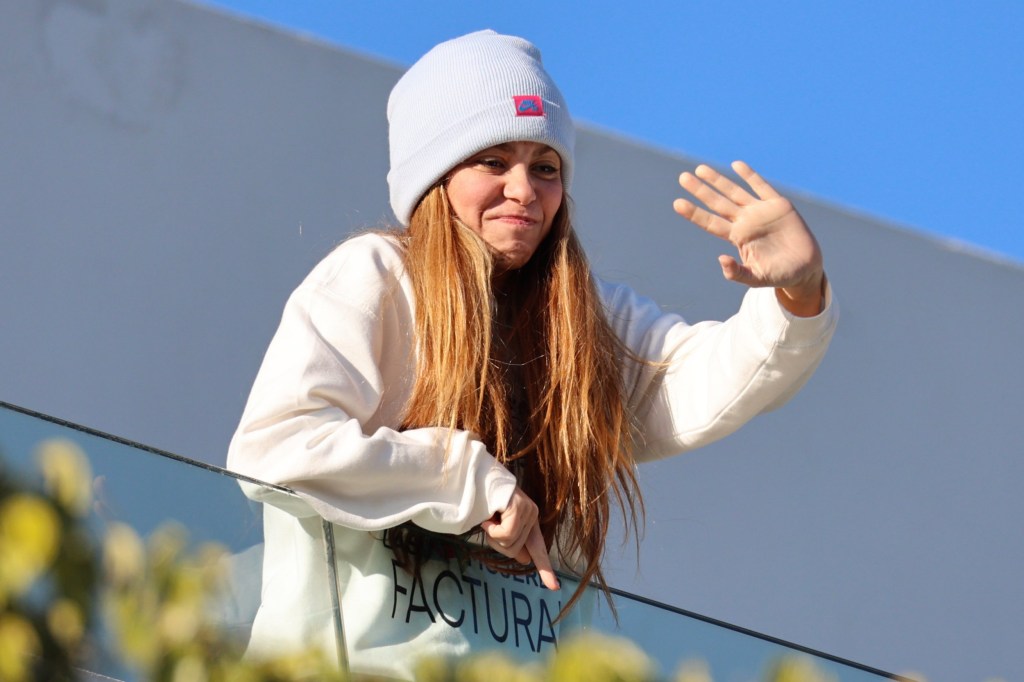 Shakira was in high spirits ahead of the weekend despite her ongoing divorce (Picture: GTres / SplashNews.com)

Shakira was in high spirits when she took time out of her day to greet fans ahead of the weekend.

Leaning over the glass balcony of her Barcelona home, the hitmaker smiled as she looked down at her supporters and gave them a wave on Friday.

The singer, full name Shakira Isabel Mebarak Ripoll, kept warm beneath a grey beanie and teamed her cosy hat with a white sweatshirt.

Blue skies loomed above Shakira, whose long hair cascaded over her shoulders.

The A-lister looked fresh-faced as she wrapped up her week and didn’t appear to be wearing a single dash of makeup.

The doting mum’s appearance comes amid her and Gerard Pique’s ongoing divorce.

Leaning over the glass balcony of her Barcelona home, Shakira smiled as she looked down at her supporters (Picture: GTres / SplashNews.com)

Shakira and her ex-husband were together for 11 years before announcing their split last April.

In a joint statement released via her publicist, the pair said: ‘We regret to confirm that we are parting ways.

‘For the well-being of our children, who are our highest priority, we ask that you respect their privacy. Thank you for your understanding.’

The former couple have since been involved in legal negotiations following their bitter separation, with the Waka Waka vocalist set to move back to Miami with their children, Sasha, seven, and Milan, nine.

Shakira and her ex-husband were together for 11 years before announcing their split last April (Picture: Frazer Harrison/Getty Images)

The hitmaker seemed to make no secret of the fact the track was about Gerard’s new 23-year-old girlfriend, with lyrics including the lines: ‘I’m worth two 22’s. You traded a Ferrari for a Twingo. You traded a Rolex for a Casio.’

In an apparent brutal dig at the former Manchester United and Barcelona defender, Shakira also sang: ‘A lot of gyms, but work your brain a little bit too.’

Soon after the song’s release, it revealed that Shakira’s collaboration with Argentine DJ Bizarrap has been watched more than 63million times in 24 hours.

The star joins a string of Latin performers who have broken records on the video platform, including J Balvin, Luis Fonsi, and Daddy Yankee.

One part of the catchy tune even appears to be a nod to her legal woes against the Spanish authorities, who have accused her of failing to pay over £12million in taxes.

What do you make of Shakira’s latest track?Comment Now

‘You left me the mother-in-law as a neighbour,’ she sings.

‘With the press at my door and a debt with the taxman.

The experiences of Hillsborough fans were published in a report (Picture: Getty / PA) Police chiefs have promised a ‘cultural change’ as they apologised to families of Hillsborough victims almost 34 years on from the disaster. The pledge comes as a national police response to a report by the Rt Revd James Jones, former bishop […]