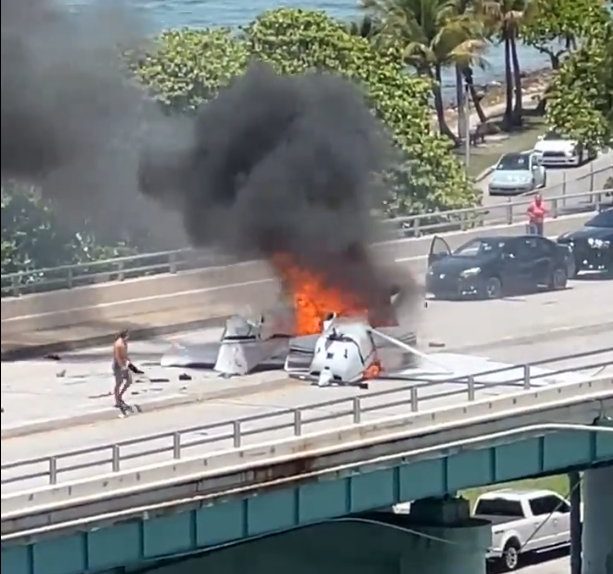 Several people have been injured after a plane smashed into a busy motorway.

The light aircraft ploughed into the road before bursting into flames.

Footage posted on social media showed the wreckage of the plane burning in the middle of the road.

A nearby car was badly damaged, though it remains unclear if it was struck by the aircraft or crashed trying to avoid it.

It’s thought there was heavy traffic on the bridge at the time and the plane may have been attempting an emergency landing.

At least one injured person could be seen in footage of the incident posted online.

Reports in US media said at least six people were injured but there has been no official confirmation.

A witness who posted a video of the aftermath online said they saw three people getting out of the plane.

Footage posted on social media showed the burning wreckage of the plane still in the road (Picture: @lexSayzzz)

A badly damaged car and one injured person can also be seen in the horrifying footage (Picture: @lexSayzzz)

Miami-Dade Fire Rescue said it was called at 12.50pm eastern time to the Collins Avenue bridge, according to the Miami Herald.

A helicopter was drafted in to take the injured to a hospital, but it’s unclear how many needed medical attention.

The paper said more than 60 firefighters were sent to the crash scene.

The Queen was likened to Alan Partridge for her hilarious shrug (Pictures: ITV) The Queen was very much on funny form last night, giving a meme-worthy reaction to being told she is ‘the heart of the nation’. From poking fun at American presidents to cutting cakes with swords, the 96-year-old monarch has a legendary humour. […]

My boyfriend and I gave up everything to convert and move into a £25,000 white builder’s van

I’ve been cheating on my wife for 10 years and it’s made me a better husband How I Made It: ‘I’m a neuroscientist – fewer than ten people do what I do’ My date wet the bed and pretended nothing had happened Associative regression: Why we revert to younger versions of ourselves around old friends […]

How to donate to Dame Deborah James’ BowelBabe Fund

Deborah James receiving her Damehood (Picture: Graham Prentice / Instagram @bowelbabe) Despite receiving end of life care, Dame Deborah James has raised more than £6 million for her BowelBabe Fund in just a few days. The You, Me and The Big C podcaster, 40, has terminal bowel cancer – originally diagnosed in December 2016 – […]