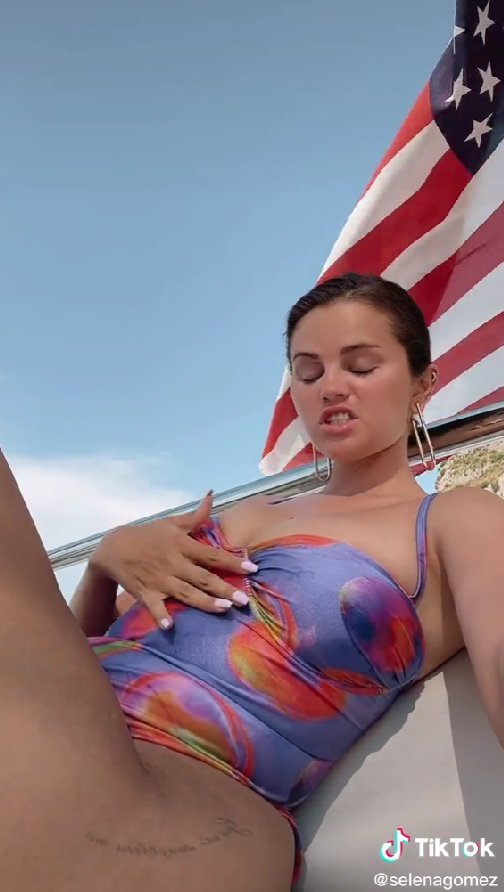 Who would have thought a tummy – Selena Gomez’s no less – could be the catalyst to saving us all from ourselves?

Ok, I may be getting ahead of myself, but the actress and singer has whipped people up into quite the frenzy after declaring, with meme backing, as she is wont to do, ‘real stomachs is coming the f**k back, ok?’

In a TikTok this week, Selena was seen reclining on a boat (#richpeople am I right?) in a one-piece and rubbing her tummy while insisting she’s ‘not sucking s**t in’.

While I’m usually resistant to celebrating such a thing as ‘woman simply exists’, the comments from her followers have got me thinking.

‘You make me feel comfortable in my own skin,’ one proclaimed, while others mused of the ‘refreshing’ nature of her body positivity.

If more celebrities and influencers took a leaf out of Selena’s book of body positivity, I’d go so far as to say there would be no such thing as ‘body positivity’ – everyone would be thriving in their own skin without making a thing about it.

She’s onto something here, you know (Picture: selenagomez/TikTok)

Selena’s post resonated with so many, which can only be a good thing (Picture: Tasos Katopodis/Getty Images for MTV Entertainment)

Yes that sounds very pie-in-the-sky thinking, but we’re dealt with an influx of filtered and fabricated physiques that have employed more special effects than a Marvel film, which makes it impossible to know what is real or not on our timelines anymore.

And as much as activists are turning the tide in their own circles, it’s gonna take someone like Selena – who breaks through the echo chamber with her 42.5million followers on TikTok, after once boasting the most followers on Instagram before Cristiano Ronaldo and his 473million ran onto the pitch and nabbed that trophy – to shift the message.

As one responded to her clip, ‘you don’t realise how much this video helps us young women’ and, scepticism back in its box, by job I agree.

Despite my defeated brand of cynicism, her message can only do good (Picture: Axelle/Bauer-Griffin/FilmMagic)

I also recognise, though, that Selena is in a position to stand up in the face of a billion-dollar industry that sells, like, everything off the back of perfection, and for every Selena Gomez there is a whole family of Kardashians that don’t subscribe to such a body positive movement and make millions each day from an arguably altered version of ‘reality’.

Selena might be encouraging not to ‘suck s**t in’, but Kim Kardashian became a billionaire from creating a shapewear company that will do that for us.

And the total antithesis to Selena’s message, and brilliant timing for this here column, only this week did Kim reveal she’d had a ‘stomach tightening treatment’.

If anything, props to the mogul for finally admitting it’s not just diet and exercise that …read more

Hollyoaks spoilers: Norma Crow kills James Nightingale and his family as she discovers his betrayal?

Norma will be on the warpath when the truth comes out (Picture: Lime Pictures) Hell hath no fury like Norma Crow (Glynis Barber) in Hollyoaks, something which James Nightingale (Gregory Finnegan) could be set to find out the hard way. The devilish gangster, known to those who fear her as The Undertaker, has proven time […]

Pete wants to present Big Brother with Glyn (Picture: Twitter/ITV) Big Brother winner Pete Bennett has put himself forward to be taking the reins of the iconic show’s reboot alongside former housemate Glyn Wise in an ‘Ant and Dec’ fashion. Reality TV fans were thrilled when it was finally confirmed, after months of rumours, that […]

Lindsay Breen and her husband Alex hit out at DK Oyster over ‘rip off’ prices (Picture: Kennedy News) The owner of a Greek restaurant accused of hitting tourists with sky-high bills for a few drinks or snacks is fighting to defend his ‘honour’. DK Oyster hit headlines this week after a Canadian couple on their […]