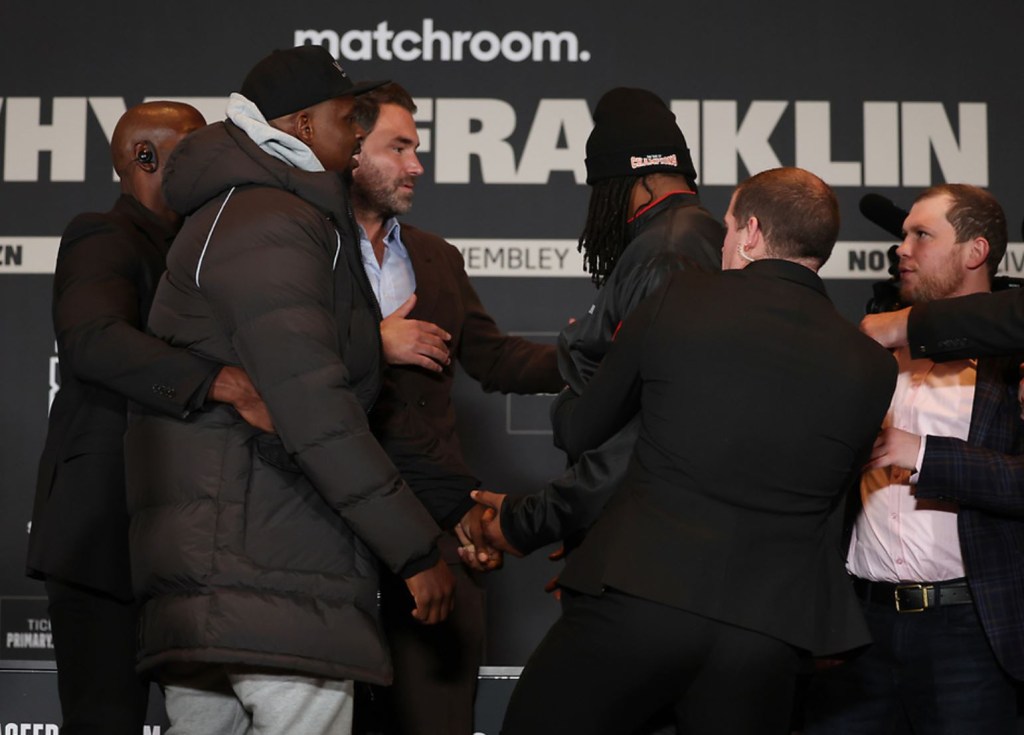 Dillian Whyte was involved in a tense confrontation with Jermaine Franklin’s promoter ahead of his fight against the undefeated American on Saturday.

But during a relatively amicable stare down, the Brixton heavyweight reacted to comments made from Dmitry Salita, Franklin’s promoter, who was stood just off his fighter.

Salita then appeared to push Whyte with security wading in before the Briton could react. Whyte and Salita continued to exchange words while Franklin calmly waited for things to cool off around him.

Franklin has won all 21 of his professional fights and while he has notable wins over Rydell Booker and Jerry Forrest on his record, taking on Whyte marks a major step up for the 29-year-old.

Whyte is coming off a damaging knockout defeat to Tyson Fury in April and former cruiserweight and heavyweight champion David Haye insists the Londoner must not only win on Saturday, but win well.

‘They need a definitive conclusion, an “I’m back” victory. They need to park up that Tyson Fury defeat and prove they are ready get in there against Anthony Joshua and give us that rematch we want.

‘From Dillian’s point of view, yes, [defeat] is out of the question, it can’t even be a thing on his mind. He is getting in the ring with someone who has never fought at his level, not once, not even remotely close.

‘Dillian is the favourite by a long way. But it is the unknown factor in an unbeaten fighter.

‘There is something about someone who has never lost or tasted defeat as a pro fighter. It gives them that X-factor.

;We don’t know what he has got. His team might have been waiting for this one opponent to unleash a world class fighter.

‘Franklin is an unknown quantity but if Dillian is the world class fighter we believed him to be going into that fight against Tyson Fury then this should be a routine performance and he should be able to look good.’

MORE : David Haye warns Dillian Whyte he must knock out Jermaine Franklin with a shock defeat ‘out of the question’

A heroic but unfortunate attempt (Picture: 7News) A pet owner clambered into an eight-metre-deep well to rescue her cat after it fell in – but the rescue mission backfired when she couldn’t get out herself. An emergency crew was called after the woman found herself in a sticky situation in the South Australian town of Gawler. The […]

Matthew Bibb (left) and Jake Johnson (right) have been jailed (Picture: Met Police) Two men who saw a homeless woman in the street in cold and wet weather tricked her into coming back to their hotel so they could sexually assault her. Matthew Bibb, 32, and Jake Johnson, 26, both from Birmingham, told her they […]