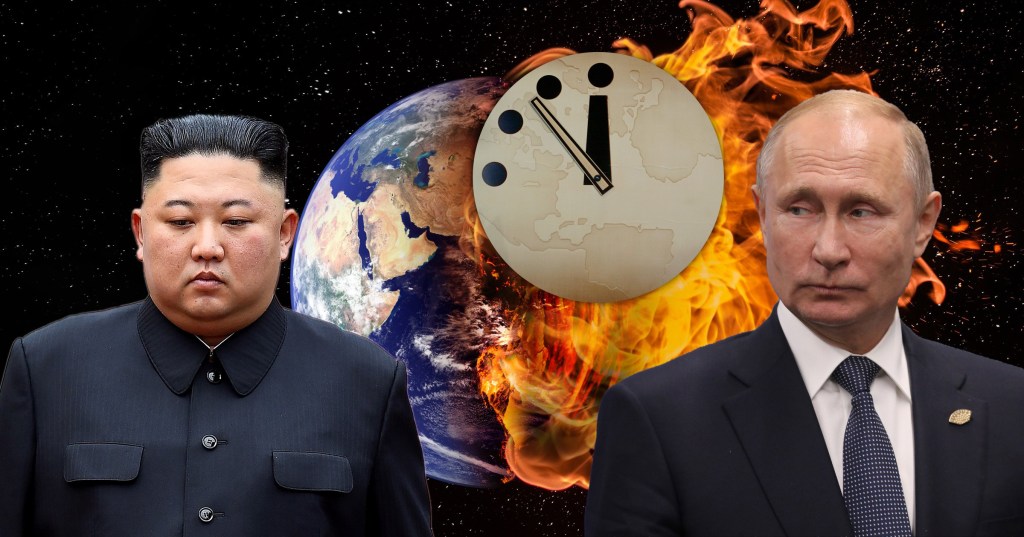 It comes as some academics urge caution in taking the clock’s symbolism at face value (Picture: Getty Images)

How close are we to the end of the world?

It may seem a fairly dramatic question for a Tuesday morning, but scientists have spent recent weeks toiling over the answer.

They are preparing today to set the time on the Doomsday Clock, which currently sits at 100 seconds to midnight.

It was created in 1947 by the Bulletin of Atomic Scientists, a science publication based in the US.

The clock was designed to represent how high the threat is of a global catastrophe, and act as a reminder of the perils we must address if we are to survive on the planet.

The closer to midnight the clock moves… the closer to annihilation humanity is according to scientists.

‘Every year, the Bulletin’s Science and Security Board looks at the world’s vulnerability to catastrophe from manmade threats,’ Rachel Bronson, president and CEO of the Bulletin of the Atomic Scientists, told ABC News.

‘This year, the war in Ukraine and the ripple effects it has caused around the world and on many issues is a major factor in that consideration.’

Since 1973, a board of scientists has met twice a year to examine the latest developments in challenges facing the world, with extra input from outside leaders in their fields, including 13 Nobel Laureates.

As of 2007, it also takes climate change into consideration and has become a way to assess the general health of the planet on an annual basis.

Dr Matt Hurley, senior lecturer in International Relations at Sheffield Hallam University, told Metro.co.uk: ‘Significant international conflicts that have erupted since the last time the Doomsday Clock was updated, including the war in Ukraine, will likely push the world a few seconds closer to midnight.

‘We live in a world of complex and interconnected crises that seem increasingly intractable, from war to climate change, from pandemics to nuclear proliferation.

‘Movements of the clock can – and should – help focus the mind. Yet this can feel like an abstract way of capturing the very real dangers facing the world.

‘The crises that inform the movements of the clock are being experienced now, in real time, in the everyday lives of human beings around the world, often in incredibly violent ways.’

Experts and scientists fear the planet has been moving ever close to disaster 1991, when the clock was shifted to 17 minutes to midnight at the end of the Cold War.

In the years since, we’ve lived through major points in history such as the coronavirus pandemic, the Russian invasion of Ukraine, the Capitol Riots and an international cost …read more

Back 4 Blood – it’s not quite goodbye for Turtle Rock studios though (pic: WB Games) It’s not shutting down completely but Back 4 Blood won’t get any more DLC, as Turtle Rock moves onto its next game. After only launching in October 2021, Left 4 Dead successor Back 4 Blood has wrapped up its […]

Poor Simon (Picture: REX) One Britain’s Got Talent contestant reportedly brought the heat in their audition and judge Simon Cowell felt the burn. The latest season of the ITV talent show has begun filming in London, with performers lining up for the chance to perform at the Royal Variety Show. After months of speculation over who will replace […]