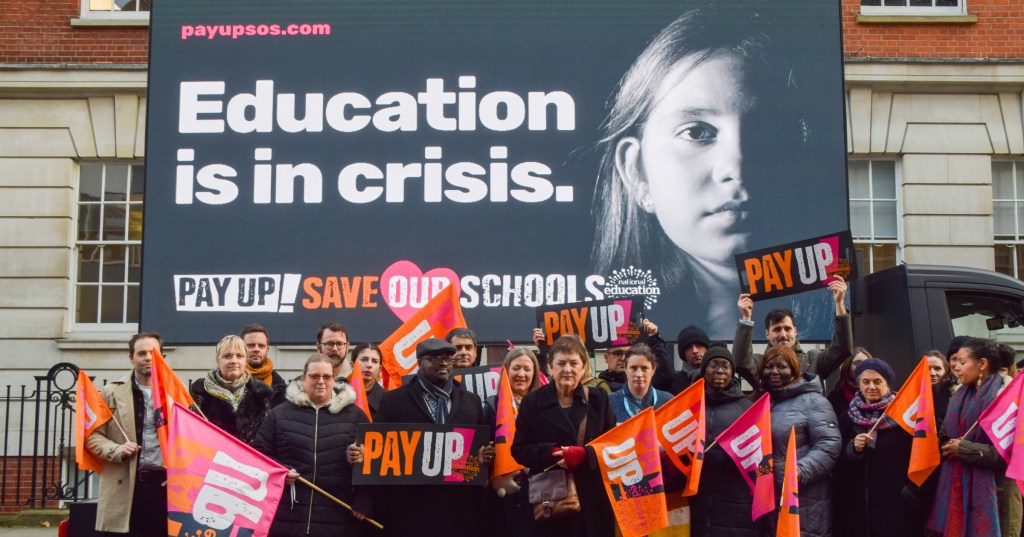 ‘Lots of schools’ in England and Wales may temporarily close next week, as more than 100,000 teachers stage industrial action.

Around 127,000 teachers and 16,000 support staff workers – who are part of the National Education Union (NEU) – voted in favour of strikes.

The walk-outs will begin on February 1.

She said this would be the case particularly ‘in areas where the NEU is the biggest union and has a really strong density, like London’.

The NEU predicts that the upcoming strikes, in February and March, will affect 23,400 schools in total.

Ms Bousted has been encouraged by the recent surge in membership, saying: ‘I think the action will be stronger because we’ve got a bigger membership. People join so they can take part in the action.

‘It’s because there’s a deep and prolonged anger about the circumstances in which they’re working.’

Schools have already seen closures because of teach walkouts in Scotland (Picture: PA)

She added that she believes ‘many more’ than 100,000 will be joining the walkouts next week.

Guidance from the Department for Education suggests agency staff and volunteers could be used to cover classes on strike days.

Head teachers are expected ‘to take all reasonable steps to keep the school open for as many pupils as possible’.

The NEU is required by law to provide schools with the number of members in a workplace ahead of planned strike action, but the union does not have to provide the names of individual members to employers.

The @NEUnion is declaring seven days of strike action in February and March. affecting 23,400 schools in England and Wales. Any individual school will only be affected by four of them. Below is the full list of NEU strike days.ð

Ms Bousted said schools will have to make the call whether to stay open or not based on how many NEU members work for them.

Although there are seven days of industrial action planned for next week, the union said any individual school will only be impacted for four days.

Conversely, the NAHT school leaders’ union and the NASUWT teachers’ union both failed to achieve the 50% ballot turnout required by law for its members to go out on strike over pay in England.

WATCH: We hope that @GillianKeegan stops this desperate effort to try and undermine the democratic vote of @NEUnion members and instead engages with us in trying to look for a solution to the problem of pay & funding in our schools which is so damaging education. #SaveOurSchools pic.twitter.com/iqFfqreo7i

When is the FA Cup fifth round draw? Start time and how to watch on TV

The famous trophy is up for grabs again (Picture: Catherine Ivill/Getty Images) The fourth round of the FA Cup has been fiercely contested in grounds the length and breadth of the country so far this weekend. A number of teams have already booked their place in the draw for the fifth round, such as Manchester […]