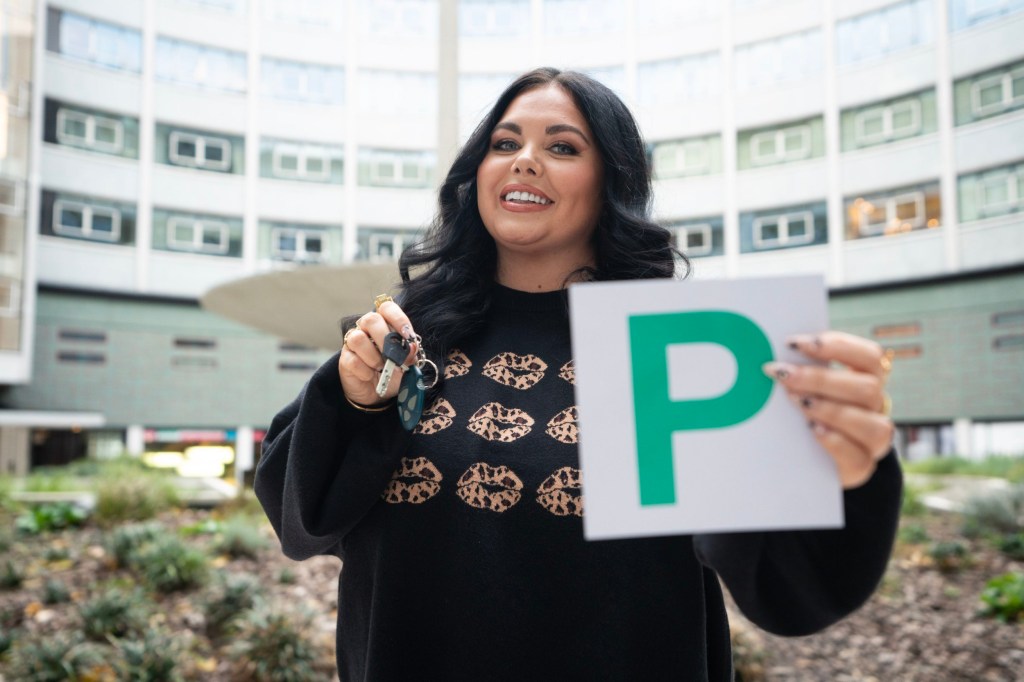 Scarlett Moffatt is thrilled to have finally got her driver’s licence (Picture: PA)

Scarlett Moffatt is thrilled to have finally got her driver’s licence (Picture: PA)

Expect to see Scarlett Moffatt zooming around on a street near you as the star has finally passed her driving test.

The former Gogglebox star had tried to get her licence 13 times before but failed each test before nailing it on her 14th attempt in September.

She’ll detail her triumph in an upcoming BBC One show, Scarlett’s Driving School, and has revealed how emotional an experience it was getting to the finish line.

‘I just get so excited every time I get my car keys, because I’ve been learning since I was 17 and I’m 32 now, you know it’s been a long time coming,’ she said.

Scarlett began to cry after being told she had passed and revealed she’s pretty savvy with her parking skills.

‘I don’t mean to live up to the stereotypical “women can’t park”, but this woman cannot park,’ she said.

The reality star had 13 failed attempts but finally got her keys and green pass (Picture: PA)

Scarlett says her health has improved since passing her test as she’s now the designated driver (Picture: PA)

The former I’m A Celebrity… Get Me Out Of Here star even said passing her driving test has improved her health as she’s drinking much less due to being behind the wheel.

‘I feel like I’m now the designated driver for everyone, and actually weirdly, I feel healthier for it,’ she told PA.

It’s been a long journey for Scarlett, 32, who started her driving lessons aged 17 (Picture: Rex Features)

‘In the sense that before when we would go out for food I would always have a couple glasses of wine, whereas now I’m not, because I’m the designated driver.’

Rather than treat herself to a swanky meal, Scarlett proved to be as down-to-earth as ever by ordering a cheeky McDonald’s instead.

Scarlett’s upcoming series will see her open up her own driving school in Teesside and attempt to help other members of the British public who are struggling to pass their driving tests as a result of missing out on driving lessons with professional instructors due to the Covid pandemic.

Each of the learner drivers take lessons with Scarlett’s driving school supported by a family member or friend who has had to become an amateur teacher. They also receive an intensive five-day crash course by some of the UK’s top professional driving instructors.

Scarlett’s Driving School is coming soon to BBC One and BBC iPlayer.

Arsene Wenger insists France should consider their injury concerns as a positive ahead of their World Cup campaign (beIN Sports) Arsene Wenger has named France as his favourites to win the 2022 World Cup. The reigning World Cup champions begin their defence against Australia on Tuesday evening, while Didier Deschamps’ side will also play Denmark […]

Janine’s dreams of a family with Mick may be snatched away (Picture: BBC) Janine Butcher’s joy following her 12 week scan has potentially ended in tragedy, as Charlie Brooks’ EastEnders alter ego fears losing her baby after a very nasty fall. Janine was on Cloud 9 as she lovingly attended her appointment at the hospital […]

Shirley Ballas remembers brother David on anniversary of his suicide

Shirley Ballas has paid tribute to her late brother on the anniversary of him taking his own life (Picture: Rex) Shirley Ballas has opened up about her brother David’s suicide on the anniversary of his death.  Strictly Come Dancing’s head judge took to social media to pay tribute to her brother who took his own life 19 years ago in […]