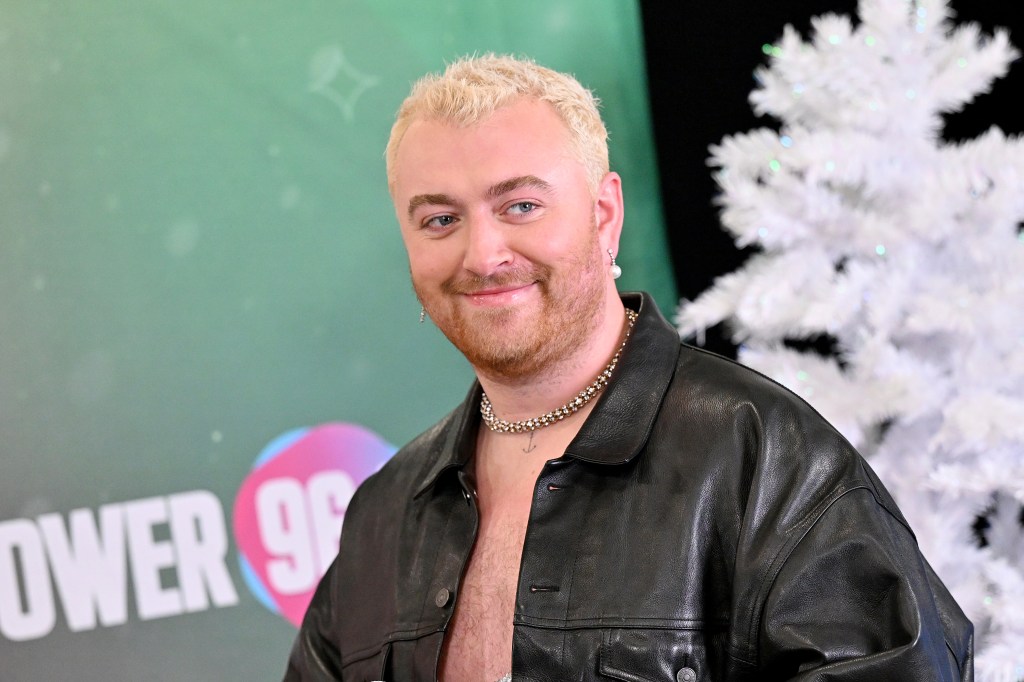 Sam Smith shared details on his dating life and opened up about his online experiences (Picture: Getty Images)

Sam Smith revealed they were blocked from swiping left and right after dating app services believed they were faking their identity.

The 30-year-old hitmaker explained they had attempted to create profiles on Tinder and Hinge but got booted off after they failed to verify their accounts.

Insisting there was always time to search for love, the non-binary award-winner admitted they would never allow their international fame to become an obstacle in their dating life.

Sam appeared on Saturday Night Live over the weekend and thrilled fans with a dazzling performance as they continued to capture audiences State-side.

Speaking with ET Canada, they divulged details of their experiences with online romances: ‘I never did Grindr. I did Tinder once, I think I got chucked off of Tinder.

‘I got chucked off of Hinge because they thought that I wasn’t me. Well, I didn’t verify my profile, so I should have done that.’

The singer said they never let fame get in the way of their love life (Picture: Getty Images)

They continued telling the outlet that their love life has never taken a backseat to their career: ‘Yeah, I’ve always been able to date’.

The Unholy singer has been romantically linked to designer Christian Cowan, model Jay Camilleri, actor Andy Newton Lee and actor Brandon Flynn in the past.

During the chat, the star also shared details on their relationship with their dog Velma, admitting the animal’s presence has a comforting effect on them.

‘She taught me how to love,’ Sam said.

Sam has been linked to a number of famous faces in the past (Picture: Getty Images)

‘I really feel like I don’t think I loved anyone other than my family and friends and stuff … she’s really taught me that.

‘I miss her loads by the way, I haven’t seen her in ages.’

The chart-topper is on the road to promote their fourth studio album Gloria, which is set to hit airwaves later this month, on January 27.

Reflecting on the album’s title, the singer told audiences at the Tonight Show with Jimmy Fallon: ‘It’s a word that’s meant a lot to me throughout my life.

‘The Laura Branigan gay anthem Gloria is something I’ve always heard in gay clubs. Then Gloria in school through singing hymns and stuff.’

‘But for me, Gloria is something that I’ve called a spirit inside of me that says to me, “Keep going. You’ve got this. Carry on.”

‘It’s like a fighter spirit within me that I call Gloria.’

Firefighters say strikes are only way country can avoid ‘catastrophe’

Following nurses, ambulance staff, railway workers and more, it seems firefighters are the next UK workforce eyeing up job action (Picture: Getty Images) At this point, Lee Hunter, 44, struggles to remember what he and his colleagues haven’t had to miss out on because of work. ‘We give up family Christmases, family parties, we can […]

Man charged with assaulting Matt Hancock on the Tube Gang who mugged American tourist for £100,000 Rolex are jailed for 15 years Mum told she’s ‘too young to have cancer’ now has 12 months to live Formula 1 drivers ‘were at serious risk of harm’ during eco protest, court hears Holocaust Memorial Day should be […]

Scott McTominay starts against Arsenal (Photo by Sebastian Frej/MB Media/Getty Images) Manchester United boss Erik ten Hag says Fred has been overlooked for today’s clash against Arsenal because Scott McTominay has a ‘special role’ to play. With Casemiro missing through suspension, compatriot Fred was expected to start against table-topping Arsenal. The Brazilian excelled against Manchester […]