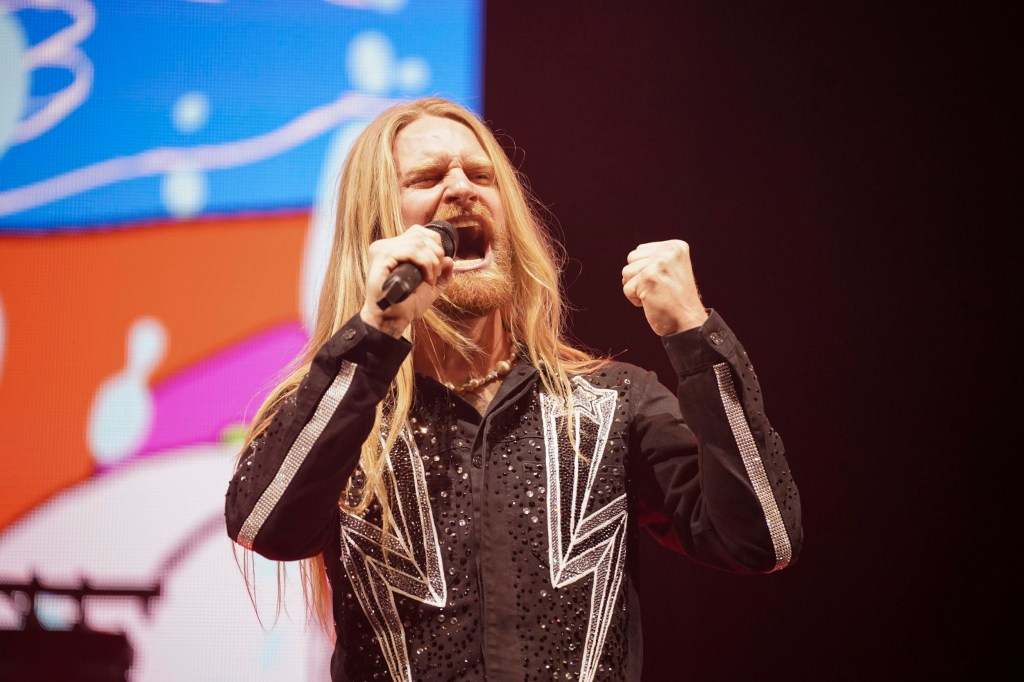 Sam will be taking the nation into the new year and we are so here for it (Picture: Dominic Lipinski/Getty Images for Bauer)

Sam Ryder will be taking the nation into 2023, and we are so here for it.

The Eurovision star has been confirmed to round off 2022, with Sam Ryder’s All Star New Year’s Eve airing on BBC One and iPlayer.

The celebration will see our Sam joined by some of music’s biggest stars with hits spanning the decades.

While fireworks will return to the banks of River Thames for the first time since 2019, the celebrations will continue after midnight with Sam’s take on classic tunes and a number of special duets.

Announcing the exciting news on The Zoe Ball Breakfast Show on BBC Radio 2, the Space Man singer said: ‘I can’t think of a better way to round off 2022 than singing some of my favourite songs with some very special guests.

‘It’s been such an incredible 12 months full of fabulous blessings thanks to fabulous people, and I’m so excited to bring in 2023 with you! As always, thank you for the opportunity!’

The singer took the UK to second place at this year’s Eurovision Song Contest (Picture: MARCO BERTORELLO/AFP via Getty Images)

Jonathan Rothery, Head of Popular Music TV at the BBC said: ‘Sam and his all-star friends performing a party playlist of big songs will be the perfect way to bring in the new year on BBC One.’

Mel Balac, Creative Director, BBC Studios Entertainment said: ‘Sam will be performing an exclusive set of NYE bangers with some unexpected musical surprises and unique twists along the way.

‘Sam’s energy and charisma is off the scale as a performer and it promises to be one heck of a party for BBC One viewers.’

2022 has been a huge year for Sam, from his roaring Eurovision success to a show stopping performance at the Queen’s Platinum Jubilee concert, then singing with music legends Brian May, Roger Taylor and the Foo Fighters at Wembley Stadium.

The musician, 33, earned the UK’s best result in decades at the 2022 Eurovision Song Contest, coming away with second place as Europe rallied around Ukraine and Kalush Orchestra amid Russia’s ongoing invasion.

He recently told Metro.co.uk that Eurovision being held in the UK in 2023 is ‘bittersweet’.

‘It’s one of those bittersweet things,’ he said.

‘Having met [Kalush Orchestra] I know how important it was to them, and rightfully so, that Eurovision be hosted at home in Ukraine.

Taylor Swift is embarking on her Eras tour next year (Picture: Getty) Taylor Swift’s Eras tour has caused chaos after Ticketmaster canceled the public ticket sale – due to ‘extraordinary’ demand. Swifties made history on the platform earlier this week when millions attempted to nab pre-sale passes to see the Bad Blood singer perform across […]

Lewis Hamilton has had a tough season (Picture: Reuters) Max Verstappen celebrated yet another win to round off a second world-title campaign, but Lewis Hamilton was simply ‘pleased this season is over and done with’ after retiring from yesterday’s Abu Dhabi Grand Prix. As Verstappen raced to his 15th victory from 22 rounds in 2022, […]

Happy Mondays’ Bez is very honest about why he’s released an autobiography: ‘Getting married ain’t cheap these days’

Bez: ‘The biggest problem was trying to remember all the shenanigans I got up to; (Picture: Metro) Happy Mondays’ Bez, 58, on why now is the right time to shed light on his rock’n’roll career, swapping painkillers for ginger and turmeric and working with Shaun Ryder on Gogglebox. You’re releasing your autobiography – why now? […]