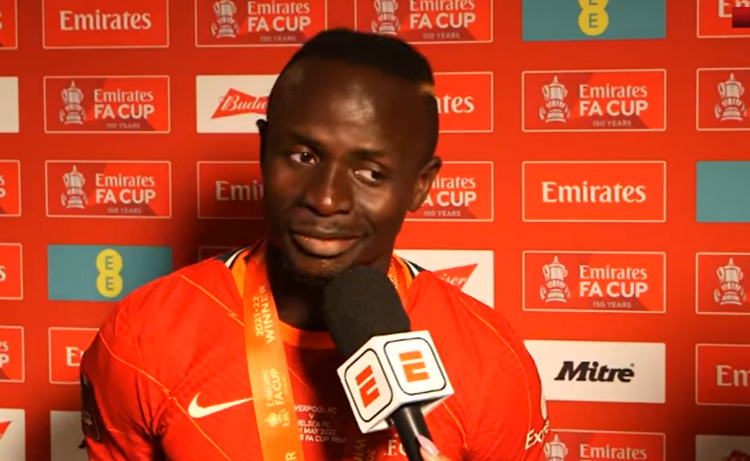 Sadio Mane praised his Liverpool teammate Alisson Becker for getting him out of jail with his penalty saving heroics in Saturday’s FA Cup final win over Chelsea.

The Senegal international had the opportunity to seal his side’s victory following Cesar Azpilicueta’s miss for the Blues, but his effort from 12 yards was kept at bay by his compatriot Edouard Mendy.

Alisson, however, stepped up to the plate and made a splendid one-handed save to deny Mason Mount and Kostas Tsimikas stepped forward to stroke home the decisive penalty.

Alisson Becker made a superb penalty save from Mason Mount in Liverpool’s win over Chelsea (Picture: Getty)

Mane had scored two crucial penalties for his country earlier this season by sealing his country’s first ever Africa Cup of Nations triumph and their place at the World Cup at the expense of Mohamed Salah’s Egypt.

The former Southampton forward was unable to repeat the trick at Wembley and was thankful to his formidable goalkeeper for coming to his rescue.

He said: ‘I think all the credit to Alisson because myself I missed the penalty but who cares. The most important thing is to win the cup and we did it.

‘Alisson, all the credit for him. I am happy for him and we are all happy and proud.’

For Tsimikas, meanwhile, who was only introduced during the closing stages with Andy Robertson fatigued, the overriding feeling was one of relief after he opted to put his name down for his side’s seventh penalty.

He said: ‘We gave it absolutely everything. Big congratulations to the boys. We have to celebrate hard. But tomorrow is the next day, we still have a lot to do. We have the games in the Premier League and we have the big final.

‘It’s very, very special for me. The manager asked me which number I want. I say number seven. He asks me why so far? I say I want number seven. And number seven gave me the opportunity to win the game. I choose the right side and I score. And I am very happy with that.

‘We want to win. Our goal from the start of the season was to go for it, hopefully at the end we are happy. We have to celebrate now, but still in our minds we have the upcoming games. We have to be 100% focused if we want to achieve our goals.’

How old is Richard Madeley and how long has he been married to Judy Finnigan?

Richard revealed his age on GMB this morning (Picture: Dave J Hogan/Getty Images) Richard Madeley has firmly fixed himself in the public eye this past year, following his stint on I’m A Celebrity and taking over the Good Morning Britain reigns from Piers Morgan. The TV presenter recently left GMB viewers shocked when he revealed […]

Angel Di Maria has praised Kylian Mbappe for staying at PSG (Pictures: Getty) Angel Di Maria believes Kylian Mbappe made the right decision to stay at Paris Saint-Germain and says the forward still has plenty of time left in his career to make a move to Real Madrid. Mbappe, 23, was expected to join Spanish […]

United want de Jong this summer with talks underway (Picture: Getty) Barcelona are aware of Manchester United’s interest in Frenkie de Jong but the midfielder is prepared to stay and fight for his place with the La Liga giants. Erik ten Hag has identified de Jong, 25, as a midfield target ahead of his arrival […]