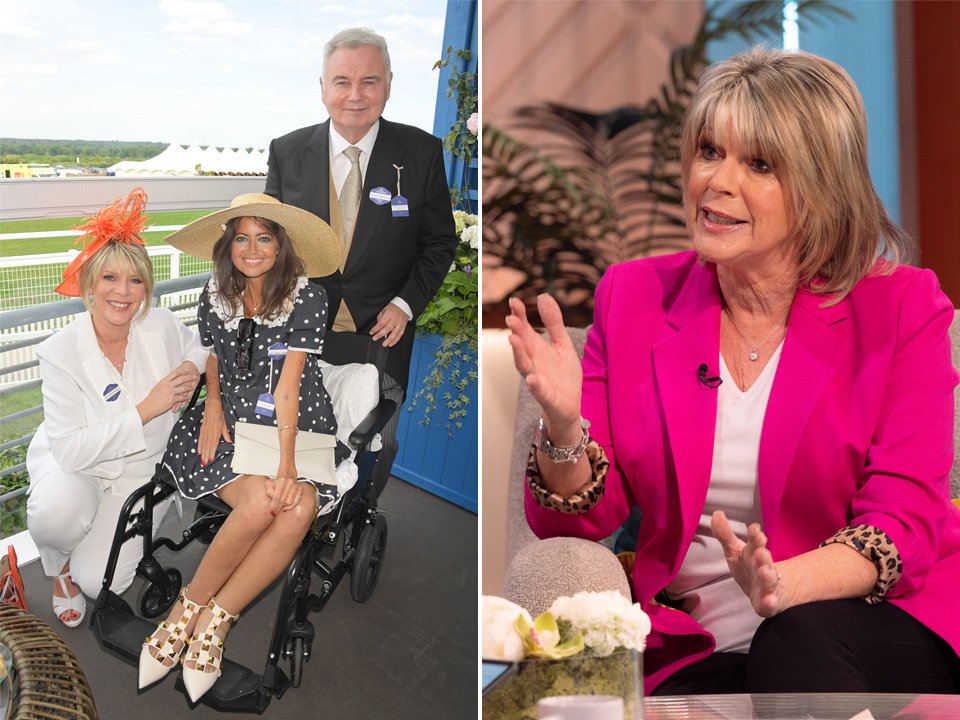 Ruth Langsford praised Dame Deborah James for her ‘incredible’ spirit during Monday’s Lorraine and said it was an ‘honour’ to meet her.

The You, Me, and the Big C host is currently receiving end-of-life care for terminal bowel cancer, but still made it to Royal Ascot and was pictured alongside her family and friends.

Ruth said she was able to share a good conversation with Deborah at the races before posing for a photo with her husband Eamonn Holmes.

‘I love her,’ Ruth, 62, told Lorraine. ‘It was amazing to see her there. That smile she has literally beams and shines. She had her hat on, her make-up on.’

The photo of them both features Deborah in the navy blue and white polka dot dress that made headlines last week.

‘I was talking to her about her charity, which has done incredibly well,’ Ruth continued. ‘She just seems to have that spirit even though she knows she’s dying.’

Ruth added: ‘She just carries on. It was such an honour to meet her.’

Deborah revealed in May that she had stopped receiving treatment and was now receiving care at her parents’ home in Surrey.

But ever since she announced that she was receiving end-of-life care, her fundraising efforts for BowelBabe have only increased.

More than £6.7million was raised for the Cancer Research UK fund, with £1million coming from Deborah’s clothing line, with over 300,000 people pledging to the cause.

She has also attended several other events ever since the news emerged that she was approaching the end of her journey, including a visit to Glyndebourne Opera House.

Over the weekend, Deborah revealed that she and her dad were able to spend Father’s Day together.

In a touching but bittersweet video, Deborah’s dad Alistair brushed his daughter’s hair because she was no longer strong enough to do it herself.

‘‘Happy Father’s Day! Yes, my Dad is brushing my hair because I have no strength anymore to brush this,’ she captioned the post.

Lorraine airs weekdays at 9am on ITV.

If you’ve got a celebrity story, video or pictures get in touch with the Metro.co.uk entertainment team by emailing us celebtips@metro.co.uk, calling 020 3615 2145 or by visiting our Submit Stuff page – we’d love to …read more

Kourtney and Travis posed with the plant-based chicken across the house and in a limo for the spicy shoot (Picture: Daring/Ellen von Unwerth/ MEGA) Kourtney Kardashian and Travis Barker have kicked off married life by working together on a rather raunchy-looking campaign for some plant-based food. Couples that pose with fake meat together, stay together (apparently. The couple tied […]

Love Island spoilers: Trouble ahead for Andrew Le Page as Tasha Ghouri gets closer to Charlie Radnedge before crucial recoupling

…read more Source:: Metro        (Visited 9 times, 1 visits today)British tourist ‘glassed girlfriend with bottle after arriving at Ibiza airport’ He was reportedly detained after flight crews informed the police about an incident shortly after the plane touched down (Picture: Getty) A British holidaymaker was…San Jose: Driver dies from crashing into front of Home […]