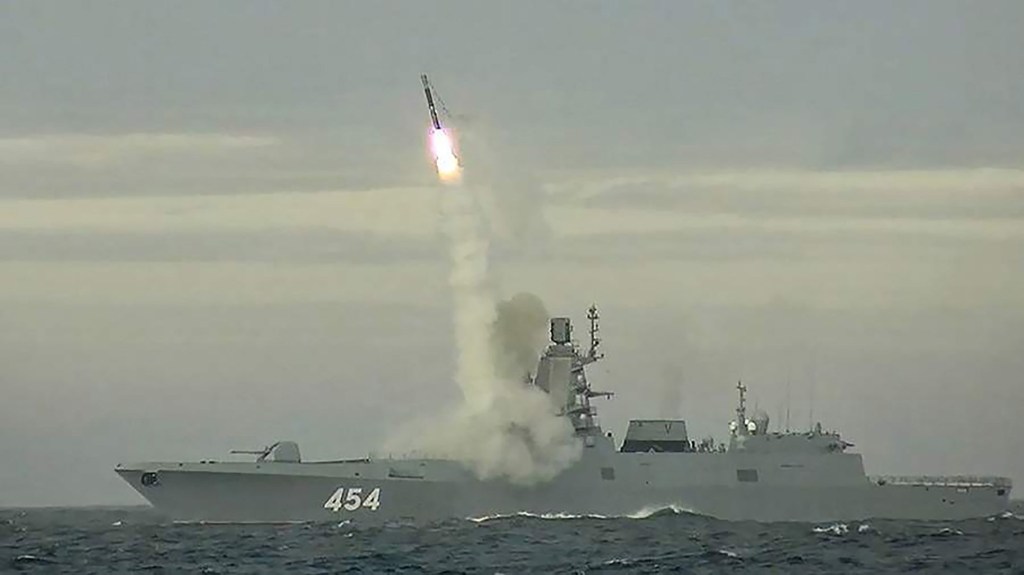 The Gorshkov warship made an expected diversion towards the US (Picture: MoD Russia/e2w)

A Russian warship armed with ‘unstoppable’ hypersonic missiles has sailed towards the US coast in a ‘show of strength’, reports say.

The frigate – named Gorshkov – has been closely monitored by NATO boats on its maiden voyage.

They have found the vessel is armed with 6,670mph Zircon missiles, which have a range of 625 miles.

Radar monitoring sites suggest the Gorshkov, which has been recently tailed by the Portuguese navy, made an unexpected diversion in the Atlantic.

An unconfirmed Russian Telegram channel report says it was ‘spotted on radar in neutral waters of the Atlantic Ocean – at an effective salvo launch distance from the US coast’.

The Russian defence ministry has not commented on the Navodka channel’s claim.

Vladimir Putin personally took part, albeit remotely, in the ceremony when the warship departed from Arctic naval base Severomorsk on January 4.

He made it clear this mission was intended as a show of strength to the West.

The hypersonic missiles have a range of 625 miles (Picture: Zvezda news/east2west news)

The despot said: ‘I am sure that such a powerful weapon will allow us to reliably protect Russia from potential external threats and help ensure our country’s national interests.’

Moscow has also boasted the Gorshkov is ‘the most dangerous enemy of surface ships in the world’s oceans’.

One report said the vessel, which was escorted through the English Channel by the Royal Navy on January 11, had separated from its tailing tanker ship Kama in the Bay of Biscay and headed west.

Moscow has boasted the Gorshkov is ‘the most dangerous enemy of surface ships in the world’s oceans’ (Picture: PA)

The frigate’s captain Igor Krokhmal has previously said: ‘No one will see the missile launch or its flight.

‘They will only see when the missile hits the target.

‘A surface target, a coastal target. I don’t think there will be anything to counter this in the next few years.’

Create your own spectacular green wall (Picture: Getty) With outdoor green spaces becoming few and far between in big cities, there’s no better time to turn your own living space into a horticultural dream. The idea of living or green walls isn’t new – many gardens across the UK boast these masterpieces, which have an […]

Lauren Enslow, 20, and Lucas Olsen, 21, are now happily married (Picture: Lauren Enslow/SWNS) The saying goes that we find love in unlikely places, and that’s certainly true for newlyweds Lauren Enslow and Lucas Olsen. The pair went to school together – but Lucas, 21, bullied Lauren, 20, for months, comparing her to a cartoon […]

The company’s ‘Voice Lab’ feature let users clone voices from small audio samples (Picture: Unsplash) Artificial intelligence is having a moment right now, thanks to the likes of Dall-E and ChatGPT but AI tools that mimic human voices could have gone a step too far. Earlier this month, UK-based ElevenLabs announced its Prime Voice AI which lets users generate […]