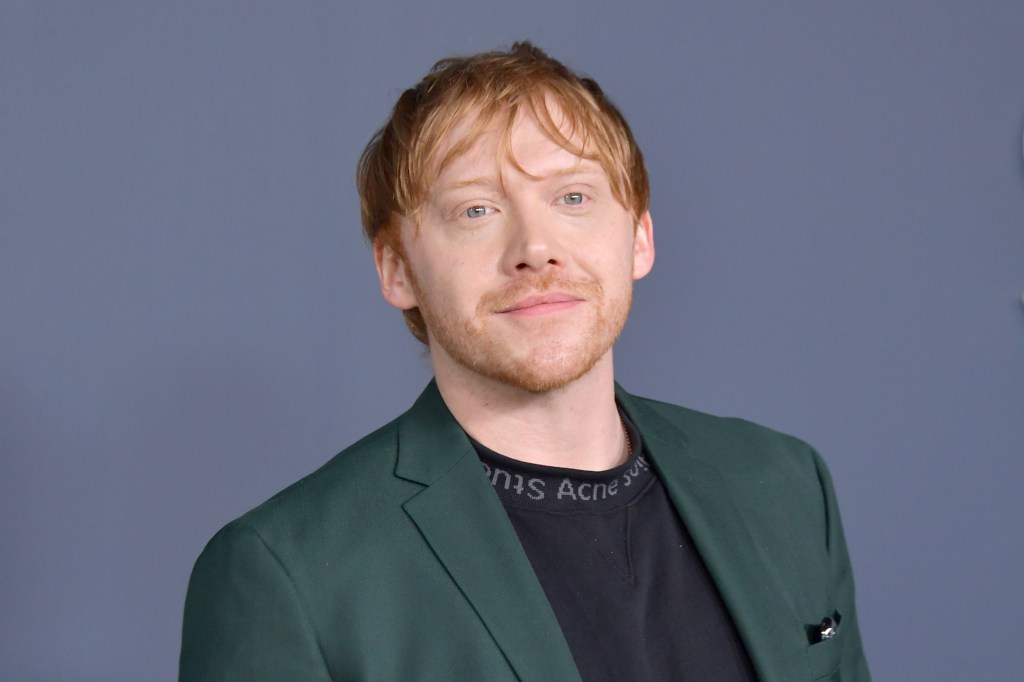 Rupert Grint used his magic wand to switch on the Christmas lights in a north London village this week (Picture: Getty Images)

Rupert Grint used his magic wand to switch on the Christmas lights in a north London village this week (Picture: Getty Images)

Rupert Grint spread some magic this week as he turned on the Christmas lights with a sweet Harry Potter throwback.

The star shot to fame as a child after clinching the role of Ron Weasley in the beloved film franchise, which came to an end in 2011 after seven movies.

Rupert has kept a relatively low profile since then, happily spending time with his long-term partner Georgina Groome and their toddler daughter Wednesday.

Now however, the Cherrybomb actor has stepped into the spotlight as he turned on the Christmas lights in a London suburb and took time to meet throngs of Potter fans.

The star was spotted in Highgate, north London on Wednesday evening, where he helped bring in the festive season by switching on the lights in the village.

And, because he’s an utter legend, he did so by swishing (and potentially flicking) a magic wand.

The actor used a wand to Lumos the lights on, with others in the crowd seen holding props (Picture: Potter/Eroteme.co.uk)

Photos from the evening show Rupert, dressed in an all-black outfit including a cap, coat and jumper with a silver necklace, utterly beaming as he points a magic wand while a man in a Santa hat makes an announcement about the lights.

In another snap, the actor happily poses for photos with a crowd of fans, giving a wide smile for the camera.

Despite now boasting a fairly impressive scruffy beard and long hair, Rupert remains instantly recognisable as the Hogwarts icon, and plenty of the crowd wore Harry Potter merch for the occasion – including one beaming little girl who got a photo with the star while wearing a Gryffindor scarf.

The star took the time to pose with fans, many of whom are massive Potter fans (Picture: Potter/Eroteme.co.uk)

Avid Potterheads were over the moon to meet the Ron Weasley star (Picture: Eroteme.co.uk))

Rupert now has a daughter of his own, having welcomed Wednesday, two, with partner Georgina in May 2020.

And while she’s just two years old, you’re never too young to get into Potter – as Rupert himself agrees.

He revealed in an interview with Jimmy Fallon earlier this year: ‘I’ve already started showing her the trailers.

Rupert enjoys a relatively quiet lif away from the spotlight with his partner and baby daughter (Picture: rupertgrint / Instagram)

‘She has a wand and a Pez dispenser with my head on it!’

Rupert had introduced his daughter to the world months after her birth when he signed up to Instagram for the very first time, joking as he did so that he was ’10 years late.’

‘Hey Instagram….only 10 years late, but here I am. Grint on the Gram!

Geri Halliwell-Horner to return to silver screen as …read more

The cost of Christmas can add up (Picture: Getty Images) We’ve had an influx of festive adverts from top supermarkets and glittering decorations are a staple on high street shelves. It may still be November, but Christmas prep is in full swing. But with the cost of living crisis gripping the nation, the Yuletide season […]

Mike Tindall greeted his former campmates and met Scarlette Douglas with a hug (Picture: Mirrorpix) Mike Tindall was clearly delighted to reunite with his former I’m A Celebrity campmates, with his wife Zara also bonding with the stars in adorable new snaps. The former rugby pro became the first member of the royal family to […]

EastEnders spoilers: Janine calls off wedding to Mick after catching him with Linda

Just how final is Janine’s decision? (Picture: BBC) Janine (Charlie Brooks) was in a sad and low-key mood in tonight’s EastEnders. After her recent fall, and being told that there could be complications for the baby, she was feeling worried and tense. Mick (Danny Dyer) did what he could to be reassuring, but when it […]