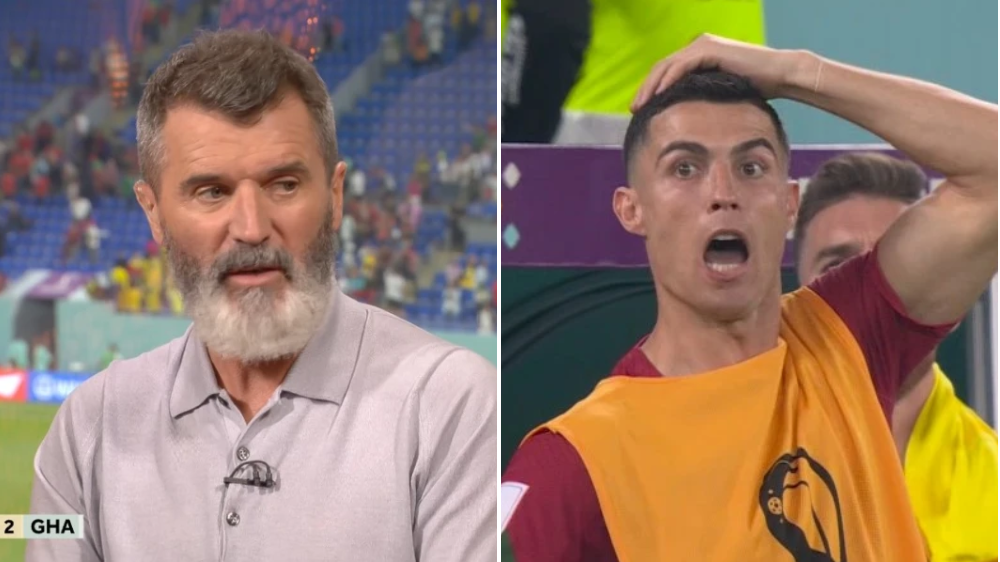 Ronaldo made history in Qatar by becoming the first male player to score at five different World Cup tournaments as he put Portugal in front from the penalty spot.

Ghana equalised shortly after but Joao Felix and Rafael Leao struck to give Portugal breathing space before Osman Bukari’s goal in the 89th minute set up a nervy period of injury time.

Portugal managed to hold on but goalkeeper Diogo Costa almost threw away the three points as he put the ball down inside his area without realising Ghana’s Inaki Williams was behind him. However, Williams slipped at the crucial moment and was unable to get a shot on goal, which spared Costa’s blushes.

Keane, who was working as a pundit for the match for ITV, couldn’t resist a joke at Newcastle’s expense as watched the replay of Ronaldo’s shocked reaction to Costa’s error and said: ‘He [Costa] was very lucky. We saw the best and worst of Portugal tonight.

‘Look at Ronaldo’s face, my goodness. Honestly, he’s just had a call [telling him] Newcastle are in for him.’

Newcastle have been linked with a move for Ronaldo once again following Manchester United’s decision to cancel his contract this week.

Speaking about Newcastle’s decision to not sign Ronaldo in the summer, Eddie Howe said: ‘We’re trying to provide long-term growth.

‘At the moment, we have quite an ageing squad. We need to get the average age down, so it might not be a signing we’d necessarily look to make.’

Joe said it would be hard to replicate the ‘innocence’ of the original movies (Picture: Moviestore/REX/Shutterstock) Filming Home Alone 2: Lost in New York was far from smooth sailing for Joe Pesci, who has revealed he actually sustained ‘serious burns’ on set. The sequel to the iconic Christmas movie follows Kevin McCallister (Macaulay Culkin) a […]

Will we regret curating our feeds with ‘influencer-style’ shots of ourselves?

Does it make you feel confident, or less than? (Picture: Getty/Metro.co.uk) Take a deep dive into any millennial’s Facebook profile, and you’ll come across photo albums with inspiring titles such as ‘Pretending To Be Freshers LOL’ or ‘Big Night at Ocean.’ Full of snaps taken on a digital camera, you’ll find at least 86 pictures […]

Last night’s concert was cancelled at the last minute (Picture: Ashley Verse) Fear not, N-Dubz fans, Tulisa Contostavlos, Dappy and Fazer have confirmed tonight’s (Wednesday) gig is still going ahead, despite last night’s sudden cancellation. The I Need You hitmakers were due to perform at the Motorpoint Arena on Tuesday evening as part of their sold […]