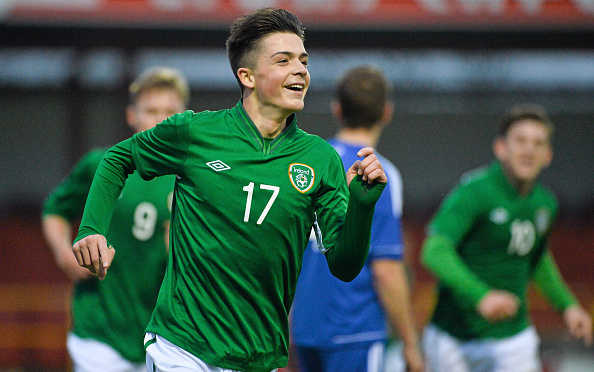 Republic of Ireland legend Roy Keane has taken a dig at England for ‘taking’ Declan Rice and Jack Grealish.

The pair are both at the Qatar World Cup with the Three Lions but things could have been different.

Grealish represented the Republic of Ireland all throughout youth level and up until the U21s.

The then-Aston Villa playmaker then declined a call-up to the national squad as he was unsure whether he wanted to declare for the Republic of Ireland or England, the place of his birth.

After a period of silence, Grealish declared for England and he has 25 caps to his name – having waited until 2020 to make his debut.

Rice, who like Grealish qualified for Ireland on account of his grandparents, represented the boys in green until 2018.

Declan Rice played for Ireland until 2018. (Photo By Seb Daly/Sportsfile via Getty Images)

He was named Ireland’s U17s player of the year in 2017 and was immediately called up to the national squad by Martin O’Neil.

After asking to take some time away to make a decision on who he declares for, then-Ireland manager Mick McCarthy met with Rice and told him he was a future captain of the country.

However, Rice eventually decided to declare for England and now has 35 caps to his name.

The English team is full of players with dual-nationalities, with the likes of Raheem Sterling [Jamaica], Harry Kane [Republic of Ireland] and Bukayo Saka [Nigeria] just four players who could have represented other countries.

England have ‘missed out’ on the likes of Wilfried Zaha in recent years, with the winger choosing to represent the Ivory Coast instead of the Three Lions.

Jamal Musiala is another high profile example, with the Bayern Munich ace deferring to Germany after representing England until the U21s.

The midfielder played in the country’s defeat to Japan yesterday and, speaking before the game, Keane said it was good to see England get a ‘taste of their own medicine’.

‘It’s good that England have been given a taste of their own medicine,’ Keane told ITV/

‘They took Rice & Grealish. Don’t get me started on that’.

MORE : Jose Mourinho not surprised by Germany’s defeat to Japan as European teams ‘focus on individuals’

What is a recession and when was the last UK one?

Katrina Harte was gutted her £1,000 lights only lasted for five days (Picture: NCJ Media) An electrical engineer who fulfilled her life-long dream of decorating her house with Christmas lights has been left devastated after the wind blew them down. Katrina Harte has been searching for the perfect decorations since February and wanted to cheer […]