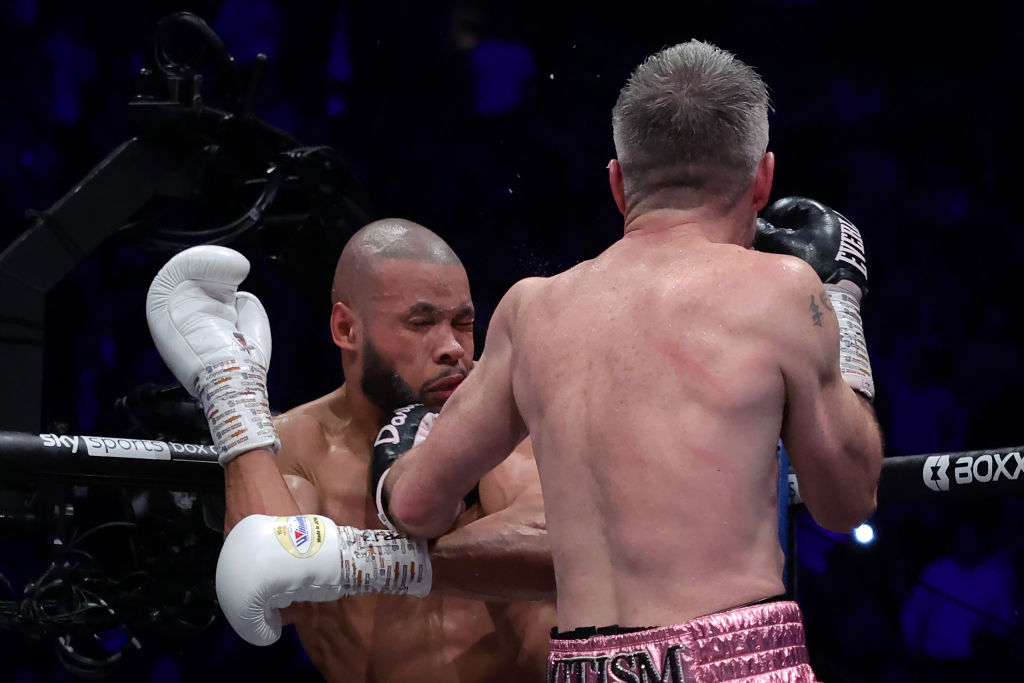 Eubank Jr was floored in the fourth round (Picture: Getty)

Smith produced a major upset in Manchester at the weekend, stopping his rival in the fourth round with the referee waving off the contest despite a disoriented Eubank Jr attempting to continue.

The finish came after a vicious flurry from Smith with one theory doing the rounds suggesting the Liverpudlian hurt his opponent with an elbow in the process.

While Smith did appear to connect with his elbow during the frantic assault, it came as a result of a left hook slipping off Eubank Jr’s head and before the vicious uppercut that sent him to the mat.

Legendary fighter Jones Jr has been training Eubank Jr in recent years with the duo suffering their first loss on Saturday.

Commenting on the fight, Eddie Hearn this week suggested Jones Jr ‘had taken away’ some of the Brighton fighter’s best qualities.

He told IFL TV: ‘I saw what we knew, which is Liam Smith is very good, very composed … And another guy who is completely lost in his boxing.

‘Technically, Eubank has never been great, but what he’s always had is a fearless mentality, a great chin and a great engine. What he’s done with Roy Jones is completely take those assets away.’

Jones Jr has hit back at Hearn, however, sharing that quote on his Instagram page while also suggesting Smith’s elbow was a factor in the result.

Tagging Hearn, he added: ‘Damn, If I can take all that away from a fighter via training, no wonder I raised so much hell in my day!! That almost sounds like Godly qualities, And I’m nowhere near what God is.’

Eubank Jr has a rematch option after suffering the third defeat of his career but has suggested he will take a couple of weeks to mull over his next move.

Games Inbox: Is The Last Of Us is better than the game, Pokémon Go love, and Ultra Street Fighter 6

Love Island viewers grossed out by Shaq Muhammad’s orgasm noises: ‘Nothing has disturbed me more’

When do old Royal Mail stamps expire and how can you exchange them?

Stamps are soon to undergo a pretty major change. (Picture: Getty Images) A major change is coming in for stamps in the UK – and no, we don’t just mean the Queen’s portrait being replaced by that of King Charles and his cipher. A new scheme is being introduced to digitalise stamps, and it means […]