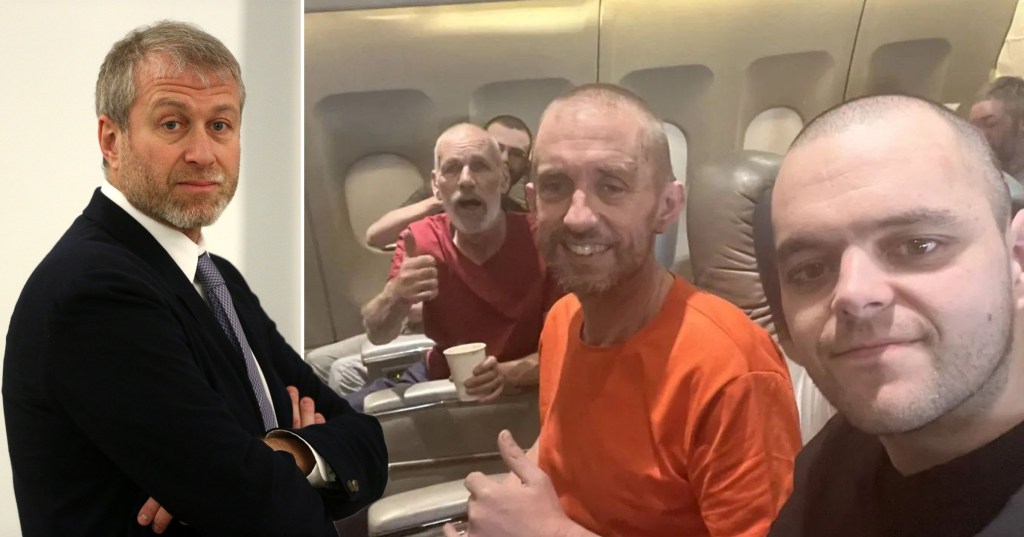 The Russian tycoon helped engineer the release of the prisoners, it has been claimed (Picture: Getty)

Former Chelsea Football Club owner Roman Abramovich is said to have played a ‘key part’ in the release of five British prisoners.

The group landed in Britain in the early hours of Thursday morning.

In an interview with The Sun, Mr Harding said the former Chelsea boss introduced himself to Mr Pinner.

Mr Abramovich’s assistant then said the Russian had played a ‘key part’ in their release.

The 55-year-old announced he would sell Chelsea on March 2, following Russia’s invasion of Ukraine.

He was then sanctioned by the UK Government on March 10, with Downing Street claiming to have proven his links to Vladimir Putin.

‘Shaun was chatting away to him about football for a long time and I was speaking to his assistant,’ Mr Harding told The Sun.

Shaun Pinner was pictured during the long-awaited reunion with his family (Picture: PA)

He reportedly spoke with the former Chelsea boss on his flight from Russia (Picture: Getty)

‘She said Roman had played a key part in getting us back. It’s quite extraordinary to think he was involved – and I wouldn’t have even been able to tell you who he was by looking at him.

‘He’s well respected by Ukrainians and massively by us now, too – he’s done a hell of a lot for us and we couldn’t thank him enough.

‘He was a sound bloke, a really lovely guy. He’s a legend – we absolutely love him and I’m so grateful for his efforts.’

Yesterday, Mr Pinner’s family said he was ‘in good spirits’ and ‘is looking forward to steak and a glass of red wine’ following his release.

A court in the self-proclaimed Donetsk People’s Republic had sentenced Mr Pinner and Mr Aslin to death in July.

They had both lived in Ukraine for a number of years and were serving with its regular forces when the full-scale war broke out.

In a statement released by the Foreign Office, Mr Pinner’s family said: ‘We would like to thank everybody involved in Shaun’s release, especially all at the Foreign Office, Liz Truss and her team, Boris Johnson and (Ukrainian) President (Volodymyr) Zelensky.

‘Shaun would also like to thank the hospitality of the Saudi Government and Prince Mohammed bin Salman al Saud who also assisted in the negotiations for his freedom.

Aiden Aslin pictured ahead of reuniting with his family in Balderton, Newark (Picture: Tom Maddick / SWNS)

‘It’s a very emotional time as you can expect and we are unable to currently discuss so early in his release any details fully. It’s been a harrowing time for Shaun and our family which has now had such a happy resolution.’

Three of the British …read more

Dwayne ‘The Rock’ Johnson’s emotional walk with lookalike actor playing his late dad in sitcom: ‘I didn’t want our hug to end’