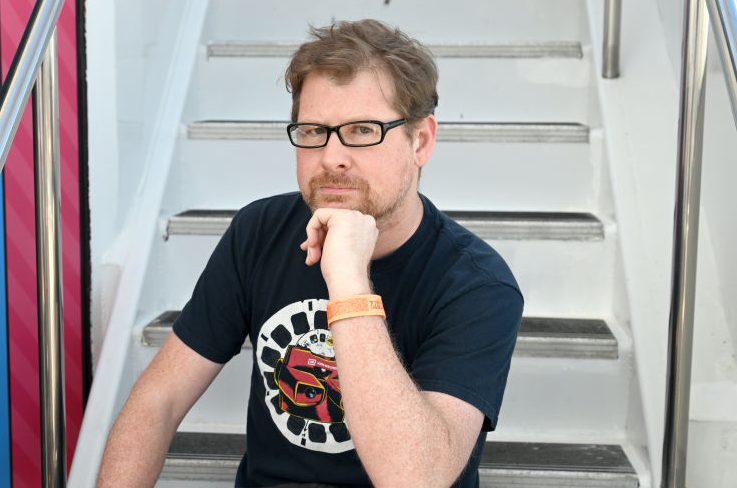 He has pleaded not guilty to the charges (Picture: Michael Kovac/Getty Images for IMDb)

Adult Swim, the channel that airs adult animated sitcom Rick and Morty, has announced they have cut ties with co-creator Justin Roiland as he faces domestic abuse charges.

Earlier this month, it was reported that a criminal complaint had been made against Roiland from prosecutors in Orange County, California, stipulating that he had been charged corporal injury and false imprisonment by menace, fraud, violence or deceit against the woman, who he was living with at the time.

According to Associated Press, the woman was not identified in court documents, and the animator has pleaded not guilty over the incident, which occurred in January 2020.

The case was reported by NBC News on January 12 this year, when a pre-trial hearing took place.

In a statement released by Adult Swim, the cable TV channel said: ‘Adult Swim has ended its association with Justin Roiland.

‘Rick and Morty will continue. The talented and dedicated crew are hard at work on Season 7.’

In a statement recently released by one of Roiland’s attorneys, they said that they ‘looked forward’ to ‘clearing the name’ of the 42-year-old.

‘We look forward to clearing Justin’s name and helping him move forward as swiftly as possible,’ they said.

Public documents seen by NBC earlier this month state that Roiland was arrested and released on a $50,000 (£40,583) bond in August 2020, before being arraigned in October that year.

In 2020, a protective order was filed, which lasts until October 2023, which outlined that he was ‘not to harass, threaten or surveil’ the anonymous person in the protective order, and cannot go within 100 feet of them.

The voice actor was also ordered to turn in any firearms in his possession or ownership.

Roiland and Dan Harmon, with whom he co-created Rick and Morty, first met at a film festival called Channel 101 in Los Angeles.

The cartoon follows a scientist called Rick and his grandson Morty – both voiced by Roiland – who embark on dangerous adventures across the universe.

The premise took inspiration from a short parody film of Back to the Future which Roiland created for the Channel 101 festival.

Keep up with the …read more

To view this video please enable JavaScript, and consider upgrading to a web browser that supports HTML5 video Winter Love Island stars Haris Namani and Anna-May Robey’s time in the villa came to an end during Wednesday’s episode. In Tuesday’s edition, fans were shocked to discover that Australian newcomers Jessie Wynter and Aaron Waters would be the […]

His family paid tribute to the ‘loving family man’ who was ‘passionate about achieving his ambitions (Picture: PA) A promising young rapper who was ‘ambushed and killed just yards from his home’ died from a gunshot wound. Fernando Johnson was attacked after getting out of his car in Acton, west London, by the A40 road […]

Arsenal signed Jorginho from Chelsea on transfer deadline day (Pictures: Getty) Jorginho’s deadline-day move to Arsenal has gone down ‘very well’ with the Gunners squad, who believe the former Chelsea midfielder can contribute to their Premier League title push. Italy international Jorginho moved to the Premier League leaders on deadline day in a deal worth […]