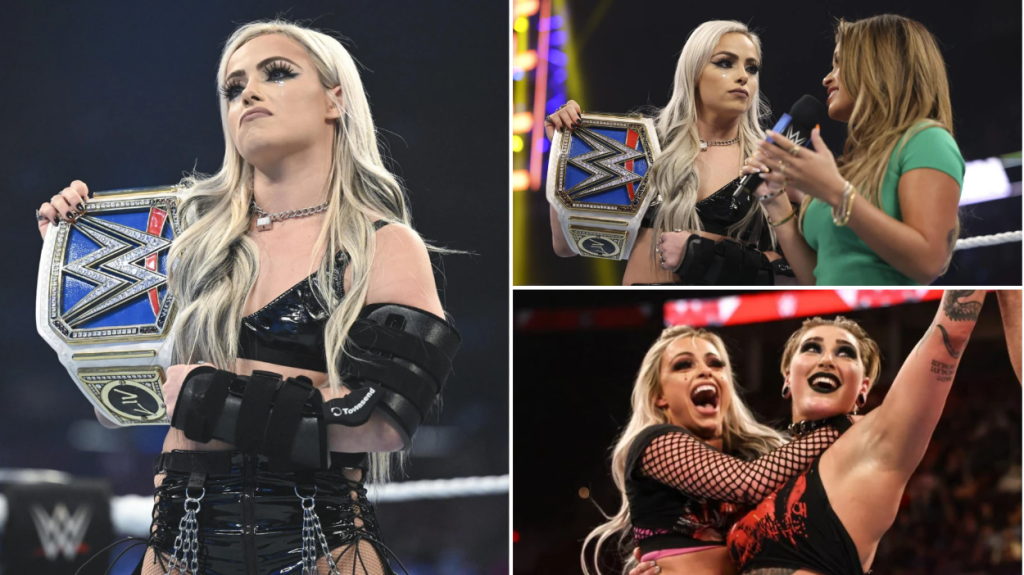 Liv Morgan has some support in the form of Kayla Braxton and Rhea Ripley (Picture: WWE)

Rhea Ripley and Kayla Braxton have blasted WWE fans for their response to Liv Morgan on SmackDown this week.

The blue brand’s women’s champion – who defeated Ronda Rousey in a controversial manner at SummerSlam to retain the title – came out to address the crowd on Friday night, but the fan favourite was met with a chorus of boos.

Although some people later tried to start a Liv Morgan chant in her favour, many people could be heard jeering and chanting ‘you tapped out’ after she submitted during the match moments before the referee made the three count to give her the win.

Fans have been heavily critical of the ending of the match for not making the new champion look strong enough, and they seemed to direct some of that frustration at Liv herself.

Following the segment, Rhea offered some support while still staying in character by offering her former tag team partner a spot alongside her in The Judgment Day with Finn Balor and Damian Priest.

Interestingly, Liv actually retweeted the message – although given that they’re on separate shows, it’s unlikely she actually joins the group.

Meanwhile, broadcaster Kayla – who was interviewing Liv in the ring on Friday – later took to Twitter to address the live audience and defend the popular star.

Rhea Ripley offered Liv the chance to join her in The Judgment Day (Picture: WWE)

She tweeted: ‘For those wondering why I looked annoyed – I was disappointed with the disrespectful chants towards our SD Womens Champion. @YaOnlyLivvOnce is so deserving so hush it when she speaks’.

Plenty of fans on social media have rushed to Liv’s defence and also criticised those in attendance for their reaction to her, while all this comes after Alexa Bliss recently revealed the wrestlers themselves are delighted to see her succeed.

‘She has trained and worked her butt off and is very passionate and loves what she does. So, this is her time.’

WWE SmackDown airs Friday nights at 1am on BT Sport 1.

Caption: EXPLAINER: What does drought status mean and what extra powers does it give councils and water companies? (Picture:REX) A drought has been declared across much of England after the driest summer in half a century. Rainfall levels in recent weeks have been at record lows which, coupled with searing heat, has depleted water levels […]

To view this video please enable JavaScript, and consider upgrading to a web browser that supports HTML5 video Viewers have been left pretty uncomfortable by the return of a TLC series that shows the close bond between mothers and daughters. A really close bond. So close in fact that one mother and daughter duo enjoy […]