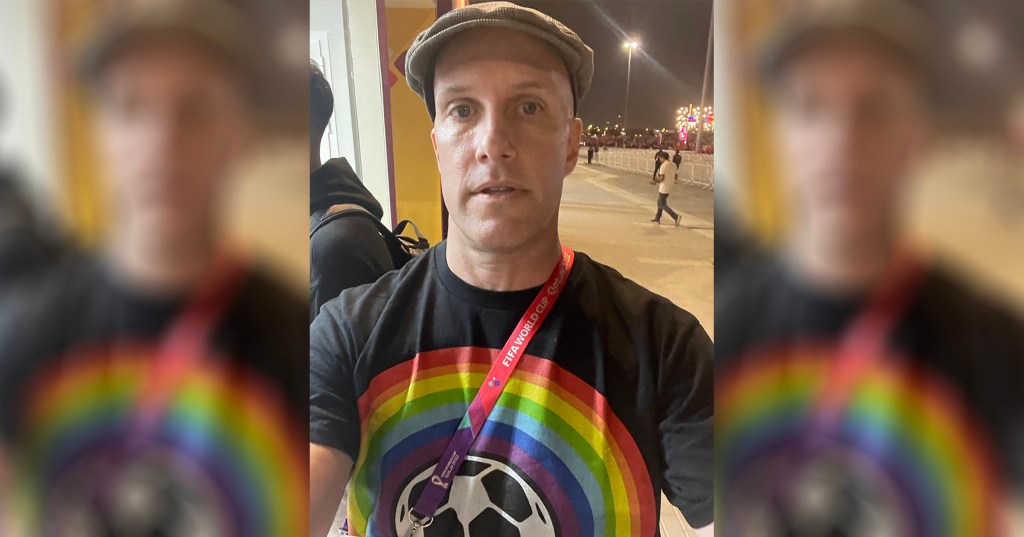 Grant Wahl was let into the stadium after an ‘unnecessary ordeal’ (Picture: Twitter/@GrantWahl)

An American journalist says he was detained at the Qatar World Cup because he was wearing a T-shirt displaying an LGBTQ+ rainbow.

Grant Wahl said a security guard refused to let him into the stadium when he tried to enter to watch the USA-Wales game this evening.

The guard reportedly told him: ‘You have to change your shirt, it’s not allowed’ before he ‘forcibly ripped’ Grant’s phone out of his hands.

The reporter says another member of staff at the stadium said his shirt was ‘political’ while someone else ‘stood above’ him and said: ‘You can make this easy. Take off your shirt.’

Grant was eventually let into the media centre after what he called ‘an unnecessary ordeal’.

The sports writer, from New York, tweeted: ‘I’m still wearing my shirt. Was detained for nearly half an hour. Go gays.’

Wales’ Rainbow Wall, a group of LGBTQ+ supporters, have meanwhile tweeted that female supporters wearing rainbow bucket hats have had them confiscated.

Iâm OK, but that was an unnecessary ordeal. Am in the media center, still wearing my shirt. Was detained for nearly half an hour. Go gays ð https://t.co/S3INBoCz89

Our rainbow bucket hat. We are so proud of them, BUT news on the ground tonight is our welsh female supporters wearing them in #Qatar are having them taken off them, Not the men, just Women. @FIFAcom ARE YOU SERIOUS !!#LGBTQRights ð´ó §ó ¢ó ·ó ¬ó ³ó ¿ð³ï¸âðð³ï¸ââ§ï¸#WeBelong | #NoPrideWithoutAll pic.twitter.com/bvo9y51WzG

The group said: ‘Our rainbow bucket hats – we are so proud of them. But news on the ground tonight is our welsh female supporters wearing them in Qatar are having them taken off them. Not the men, just women.

A US supporter was also reportedly threatened on the Metro for carrying a small rainbow flag while travelling to the stadium.

The man who appeared to be a Qatar supporter threatened to ‘kill’ him and was saying the flag ‘was not allowed’.

‘We have our own culture.’ he added.

Wales and US fans, as well as Qatari security guards, are said to have intervened to protect the fan carrying the flag.

LGBTQ+ rights have been at the forefront of discussions about the World Cup today.

Harry Kane was supposed to wear the OneLove armband in protest at the World Cup (Picture: PA)

Joe Lycett addressed David Beckham (Picture:@joelycett/Twitter) Joe Lycett has revealed the LGBT charities he donated £10,000 to amid his controversial money-shredding stunt, which saw him call out David Beckham for his deal with Qatar. If you somehow missed it, Lycett threatened to shred £10,000 unless Beckham ended his relationship with Qatar. Homosexuality is illegal in […]

Your weekly tarot horoscope for November 27 to December 3

Get ready for a new week (Picture: Getty/Metro.co.uk) We’re not long into Sagittarius season and have just had its New Moon (both energizing forces). Plus, this week Neptune turns direct after a lengthy retrograde, so the forces are all aligning to give us extra va va voom to get things done and have adventures, challenges, […]

Coronation Street has been hit with 139 Ofcom complaints in relation to scenes of racist violence. The show has a hard-hitting and controversial storyline focusing on the grooming of teenager Max Turner (Paddy Bever) into a far right extremism group. One particular scene last week has attracted particular backlash. The episode saw young refugee Daryan […]